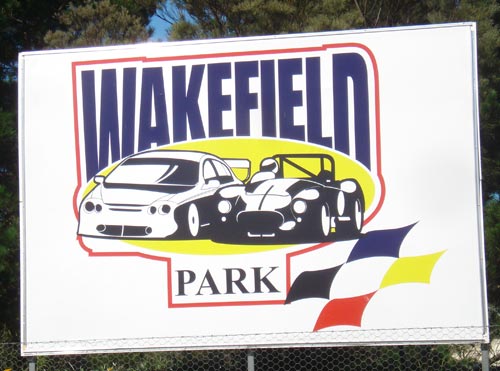 The racing adventure of a lifetime started on a small club race track southwest of Sydney. The 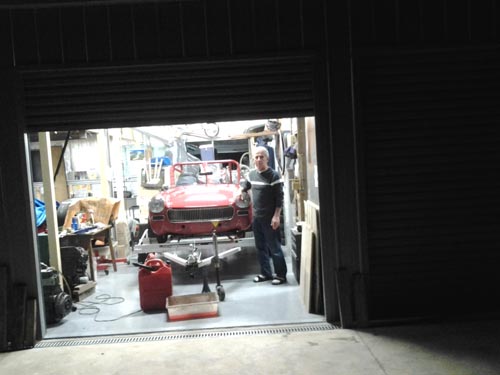 Sydney area is not unlike a lot of areas in America in that many of the racers tell stories about the number of old race tracks that have been bull dozed by the developers for housing or shopping. Eastern Creek and Wakefield are the only 2 tracks in operation today. 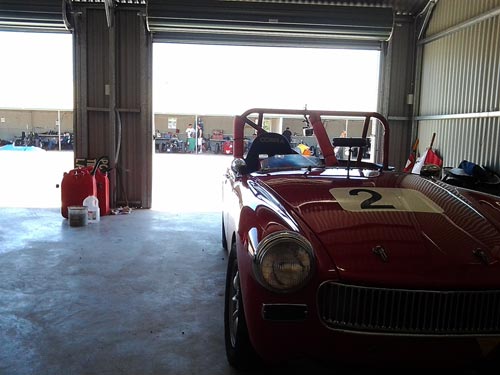 The actual racing was scheduled for Saturday and Sunday but as the track was available on Friday for a little paid practice we took advantage of it to be sure I could remember how to shift with my left hand and drive a rear wheel drive race car. It has been at least 5 years since I have had the opportunity to drive something other than a Mini or the Aardvark (another front wheel drive special). 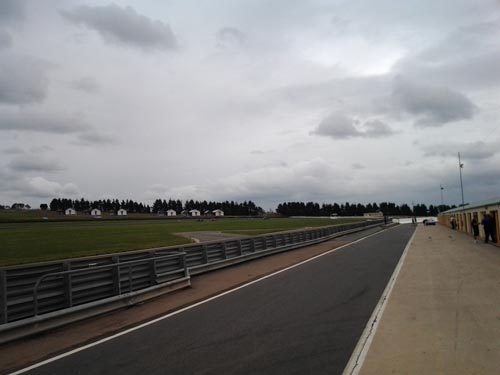 The MG Midget that I had the opportunity to drive has a long history of being a quick car that was well sorted and in fact had only one race on a completely rebuilt 1275cc engine. The tires of choice in this race group are Yokohomas and these too only had one race on them. As the owner of the car is about my height we found no need to do anything special with the seat position, etc. 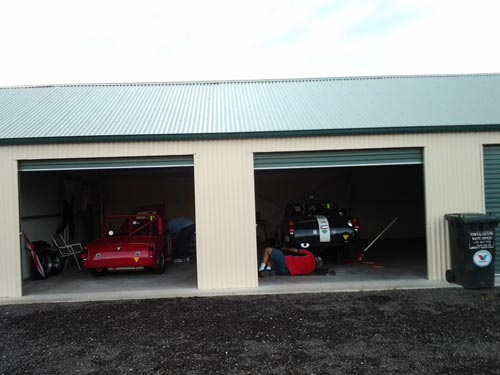 Friday practice was not unlike that in the states, three groups were organized from those that signed up according to some general guide lines of speed, size, open and closed wheel. Four groups in total with 25 minute sessions. First cars were out at 8:30 with no break for lunch meant that each group would get on the track 6 or 7 times during the day. 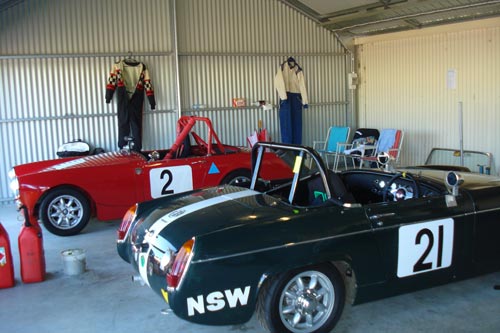 The track length was such that a reasonable lap time around the the short 10 turn track was about 1minute 17 seconds thus each session it was not difficult to get in 10 to 12 laps.

The first practice of the day was sunny and bright with about 20 to 25 cars on my grid. Starting from the grid the course went form left to right with some very fast and long corners, a long straight, a couple 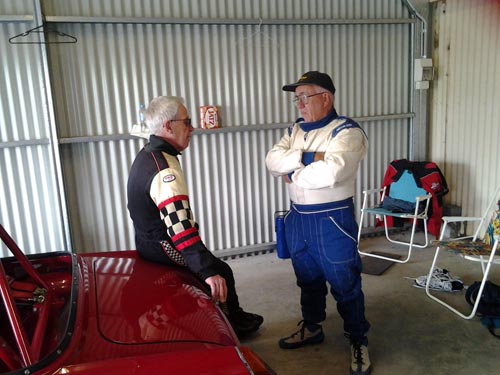 off camber corners, a short uphill section, etc. etc. a pretty good drivers course. I was fortunate in that the owner of the car (Peter) was to race the following day in his second MG Midget. This allowed him to also be at the practice to show me not only around the facility but also the most common lines around the track.

While the track was very friendly to the newcomers as it had no blind corners with lots of run-off room, to me that didn't have any idea where I was going in a rear wheel drive car, it caused a few uneasy 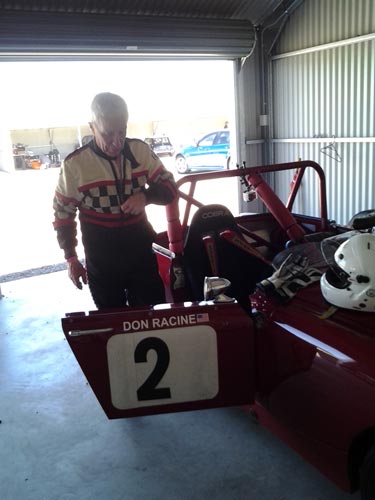 moments. On the second lap following Peter's line thru the tight turn going onto the front straight I found it VERY easy to do a 360 degree turn when in reality it should only have been a 90! And I did it more than once. The combination of not hitting the apex, pinching it off on the exit, rear wheel drive, etc. was a real learning curve. But at the end of the first session at least I understood the limits of the car and had started to remember the track.

The second session was much better with a few tail-out turns but at least in semi-control. 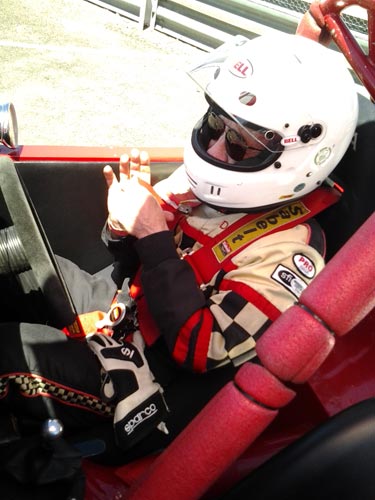 By the third session I was finally getting it reasonable together and getting laps times in line with the owners (Peter's) times. And by the fourth session I was down to the 1:14 range, felling pretty good about it all until I was reminded by Peter that the start of the race in Australia is always done from a standing start and not the more common rolling start as done in the USA. I went out on the 4th session with instructions to try to find a clear spot on the track and come to a complete stop to try and practice a standing start. But the fifth time out seemed to include ore cars than ever and thus never really had a chance to practice that although laps times continued to improve. 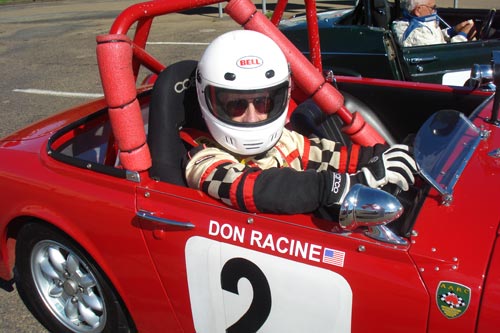 Saturday morning drivers meeting as I think typical of all vintage race meets with the exception that the English spoken as a little difficult to understand. Thus the very critical start procedure was still not very clear. It was decided that as we would be the 4th race of the morning after all the practice (qualifying) sessions we would watch a couple of the actual race starts to see how it was all done. 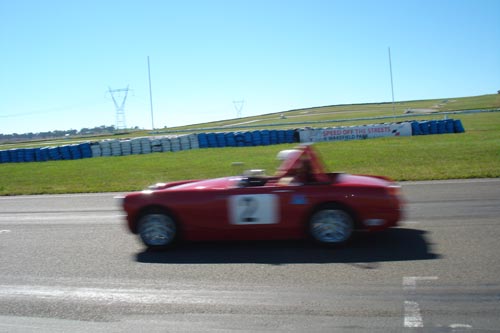 Qualifying went well although I never got down to the lap times of the previous day, I was the second fastest Midget in my class and thus started 19th on the grid with a 34 car field. Most of the cars on the front of the grid where either 911 Porsches, Alfas and an MGB and Clubmans of one form or another (Mallocks, Lotus- home built specials typically Ford powered). 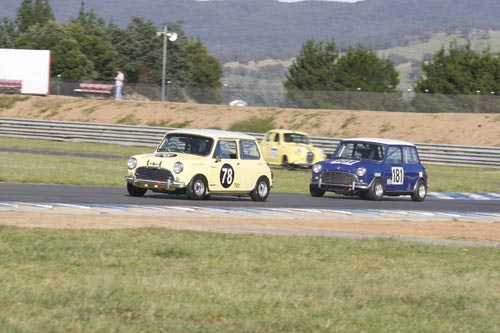 The normal schedule for this type of club event started with and then the results of each succeeding race determining the starting position for the next race with 5 races schedules for the week-end. The first 3 races were only 6 laps only with the last two on Sunday being 7 and then 8 laps. Clearly starting position and a good start are a very important part of the event. 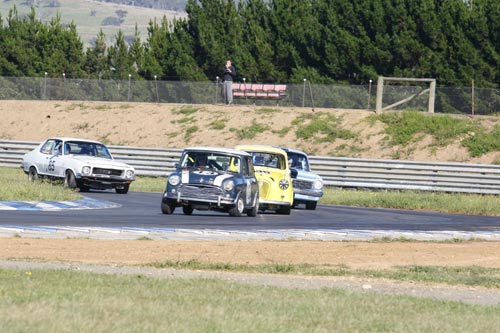 The start procedure for the race looked simply enough; you leave the 'dummy grid', as they call it and make on lap of the track to warm up tires and drivers. Coming to the front straight you line in 2 by 2 on some very faint makes on the blacktop. For the first race I was to start 19th but did not know which side of the tack that meant I would be on. As you might guess, I almost started on the wrong side, but got set in time. The grid people walk the back of the grid to be sure that everyone is in position and then waves a green flag to the guy on the 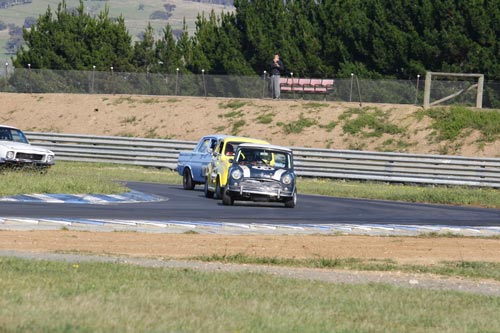 starters stand. He in turn then puts up a sign that says 30 seconds. After that he turns on the RED lights, you now know that you have only a few more seconds of anxiety before you can get it all started. When the red light goes out it the excitement begins. What rush!! While it all happens rather quickly I have come to really like the thrill of the start, perhaps it was because I did not stall the car or spin the tire or perhaps because the car was extremely well set-up for this kind of thing but for sure it was one of the best parts of the race. I can 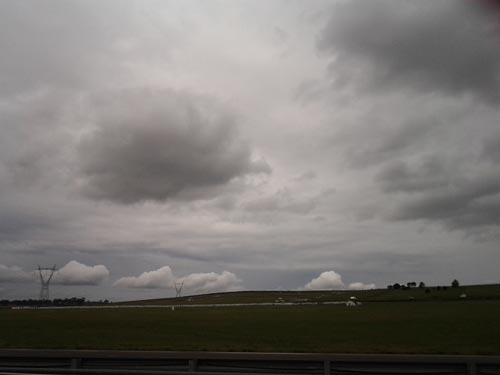 remember only a little about it all but do know the front straight could hold only about 4 or at best 5 cars across and I was on the inside heading to a tight right hand turn at the end of the start. The cars are positioned on the grid with about 2 car lengths gap between rows and then the red light goes out you look for a gap e train front of you. The car in front of me was some sort of Alfa sedan (1600cc or so) but low and behold I found myself on his bumper with the only hole on the very right edge of the track, almost in the dirt and as squirted by him and another car of so on my left, not even sure what they were. This would be the first opportunity for me to experience the quality of the other drivers and try to 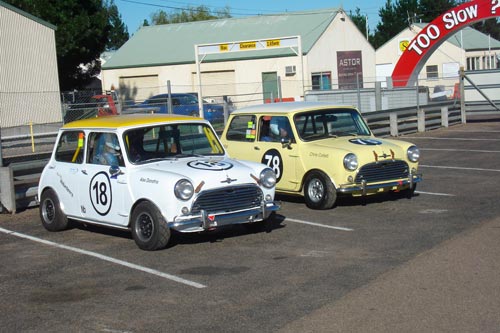 determine how safe or dangerous it might be out there wheel to wheel with these guys all wanting to be in front! Well, 6 laps is not very long and the track being so short, not a lot of places to pass, I ended up 17th! I was satisfied and excited. The only complaint I had was that the demand on the brakes seemed to too high for the set-up. Best advise from the owner was to simply stop using them!! 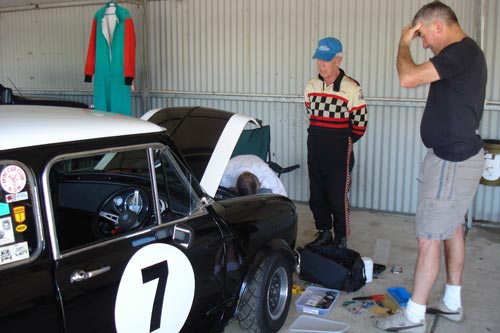 The next race I also started on the inside and much to my surprise I was able to pull the same trick on the start and race up the inside to pass a few cars on the start. While the race looking forward was not overly exciting, my mirrors were more than full for the entire six laps. To be honest, it was all over so fast it is hard to remember it all. By the end of this second race I was up to 13th. 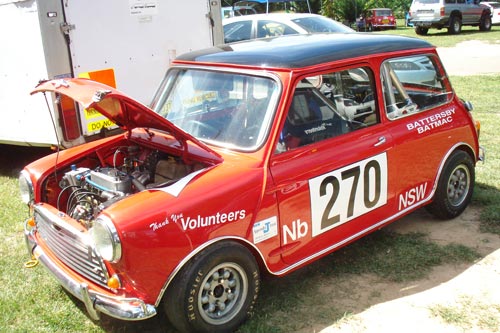 Now all of a sudden, this event was no longer just a practice and warm up for the big Phillip Island race but I had set a target of being in the top 10.

From my very limited experience it seemed as though starting the race on the inside of the track was a position to be in. Thus when we lined up for the next race fould myself on the outside I had to wonder now where do I go. While sitting on the start line I looked in front of me to 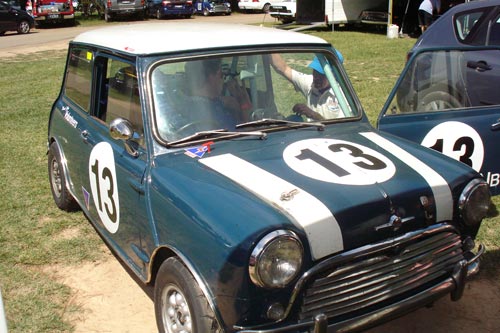 see another couple Alfas, a MGB and a 911. Before I had too much time to plan, the red light went out and the race was on. Now the front straight could allow 4 widths with easy, 5 would b a little tight, but darned if this little red Midget did not have the power to make a move right up the middle. Before I knew it I was running in 10th place. I had reached my goal and just had to stay in front of all those guys that had out qualified me. And I almost made it-- on the last lap a TR6 started 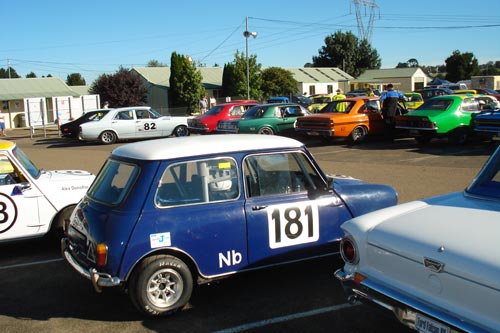 to push me through every corner and as expected was able to pull me down the straight.

I was really feeling bad about how hard I was pushing this great little car and starting to think that perhaps enough is enough, after all we needed to be sure we could have tires and engine to run the big race in 2 weeks! I made the decision to put it on the trailer, I had nothing else to gain, I had meet my impromptu target of 10th place and the car still seemed in great shape. It was time to stop!

Vintage Racing on the Philip Island - AUS
Created: May 03, 2012
Phillip Island is the on the southern most tip of Australia and only 90 miles from Melbourne. The 38 Sq. mile island features spectacular coastal scenery, charming heritage and an abundance of Australian wildlife AND the most famous race track in a country that is 2.9M sq.miles (the USA only has 3M Sq. miles) with a total population of 21.8 Million people (California alone has 37.7 million). Phillip Island itself has a population of less than 10,000.
Read Complete Article

Vintage racing (and more) in Australia - AUS
Created: April 03, 2012
The mystique of Phillip Island was with us for almost 5 months, before we left for Australia. The anticipation of participating in the world class premiere Aussie vintage racing event was intertwined in our daily life, everything relating to "when we go to Australia....."
Read Complete Article
Written By: JL
Article Date: Apr 19, 2012