Posted: Feb 14, 2019 02:25PM
dogscarf,mite have some parts for your minis Check my profile to reply
Return to Forum Quote Post Reply

Posted: Feb 14, 2019 09:20AM
Fellow Minioids,  OK, here is what I am going to try.  I will use two of the Mini Mania nylon bushings and I have some two-part epoxy putty that sets up harder than a rock.  I can form the putty around the outside of the bushings and push them into the steering rack tube.  Then quickly insert the main steel rack through the bushings to centralize them.  It sets up in ten minutes.  I will find out if it works.

Posted: Feb 11, 2019 05:25PM
The metal ring is mangled beyond recognition.  Set screw was out.  The rack is totally apart.  Headed to the trash with both of them unless I can find a bushing that actually works.  New racks are dirt cheap.


Been There = done that = you're on the right path

Re insert and  re align the screw holes and it WILL fix your rack.

Edited:  Feb 11, 2019 12:27PM
there is a set screw that holds the metal collar of the felt bushing in. If you don't remove that screw, the bushing will not come out without major grief. I forgot to remove it one time and had a heckuva time.

I too have found that the bushing sold by minimania is a loose fit. I believe it expects you to reuse the metal collar that the felt bush was inside of. Part number 37H2079

It's part number 4 in this diagram 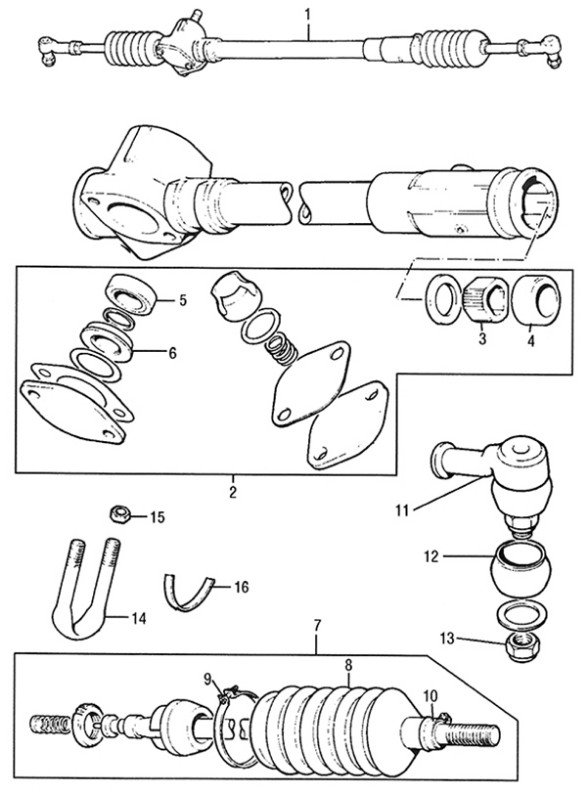 A friend locally had to take his old one and hammer it back round-ish when he forgot to reuse it initially and found he had slop in his. Oddly enough, I found one about 2 nights ago while cleaning up my garage floor. still in original Leyland packaging. I remember when I first encountered it (came with a bunch of parts I received when I bought a car eons ago ) I was like "what is THIS for and when will I ever NEED this?!"  When I re-encountered it I put it in a safe place for the next time I need it.

Posted: Feb 11, 2019 12:14PM
Fellow Minioids,  OK,  I have two Mk1 Mini racks.  I bought two of the nylon insert bushings from Mini Mania.  They do  not fit.  There is too much side play on the outside diameter.  I wonder if there is another bushing available.  Getting the old bushing out took 1.5 hours.  The method with the screws did not work and I had to take the entire rack apart and knock it out.  It was stubborn as hell.  Both racks are junk if I cannot get the correct bushing.  Any ideas on getting the correct bushings?  or I will likely just buy a new rack for $80.

Posted: Jan 26, 2019 07:17AM
I'm sure we all know there is more than one type of rack. Later ones have removable ends which are not adjustable. I have machined bushings from Delrin, nylon, and oil-lite bronze. They are all on the shelf booted and boxed. I have a collection of racks not yet rebuilt. Both LHD/RHD MK1 and later. It took a while for me to get around to bushing and sizing 60/70 yoke/pot joint diff. side covers. Not sure when I'll find time to rebuild all the racks on hand. Steve (CTR)
Return to Forum Quote Post Reply

Posted: Jan 25, 2019 03:42PM
Like Spank, I made a Delrin bushing for my Mk1 steering rack when its original bushing fell apart.  I also hated taking the end off the rack.  That was probably the worst part of the job.  Of course... it would have been easier if I had taken the rack off the car so I could work at the bench.
Doug L.
Return to Forum Quote Post Reply

oddly enough I came across these pics from 2009 just a couple of weeks ago. this was when I used a piece of delrin turned down as a replacement bushing.

Now they have these readily available:

There's an exploded diagram on that parts link that may help you id stuff, too.


Give a car more power and it goes faster on the straights,
make a car lighter and it's faster everywhere. Colin Chapman.

undo the locking collar and unthread the end of the rack (I use a small pipe wrench when it's tough) . Remove the little philips head set screw, and then I use 2-3 long screws to screw in to the bushing or between the bushing and rack housing and then turn the wheel to use the rack to help push out the bushing (that's been wedged with the screws). Or I pull on the screws, or a combination of both. Takes about 1 hour or less to get old one out and new one in and rack back together. Of course the first time I did it it took 2 hours... Finding a a rack to yank a bushing out of or making one up to fit takes longer than the swap.

I know exactly what you mean by that clunking as it happened with my Traveller. I took the the rack out to fix it.

The power of accurate observation is commonly called cynicism by those who have not got it. G.B.S. Sarcasm is the lowest form of wit. Oscar Wilde

The later racks have a nylon bushing in place of the felt part. That is the part that is worn on mine.

"How can anything bigger be mini?"

The felt bushing goes bad on that side. That's all it really is: a metal sleeve with a heavy felt that impregnated with grease. And the part is not sold separately

I've had some success with using some teflon and/or delrin turned down on a lathe and punched in, but unfortunately have found that each rack has to be measured for the fit. I've come across a couple of different inside diameters (inner rack diameters) for the bushing.

You can do it with it on the car.

My car is RHD. The left side of the steering rack is making a knocking sound over bumps and such. Is it possible to repair the rack while still in the car? I have the parts I think I might need. I just installed this used rack a year or so ago so I do know how to remove if needed. Also is there any special tools needed to take the left side apart?

"How can anything bigger be mini?"