Posted: Aug 3, 2021 03:04AM
Quote:
Originally Posted by Shanahan
I spent over $100 on an oil change back in August, today I was told my engine was having issues with the timing at the same shop I got the oil change. The mechanic told me it was due to not having enough oil? Is this normal? For a car to need an oil top up four months later?
You don't say what kind of car you have. If it is a modern car with fuel injection and electronic spark ignition, (both of which have "timing"), oil level or condition will have nothing to do with timing. If it is an older car with a carburetor and an ignition distributor, oil would still have nothing to to with the timing.
However, you may have not understood completely what they were telling you. All engines have a chain or belt that coordinates the operation of valves with the movement of the pistons. They are commonly referred to as the "timing chain" or "timing belt". Some (not all) engines have a hydraulic device (A "tensioner") to keep the correct tension on the timing chain or belt. This is operated by the engine's oil pressure. If your engine oil gets too low, the oil pressure drops. This can cause the tensioner to lose pressure and allow enough slack that the timing chain or belt slips and the valve timing goes off. This results in a loss of performance and possibly damage to the engine.

Oil consumption or loss is a separate matter. If it needs topping up every four months, you have very large oil loss, which can be from two ways. The obvious one is leakage - pools and drips of oil on the ground where you park and an engine that is getting dirty underneath. The other is internal to the engine, where oil is getting into the cylinders and is being burnt. This shows up as a hazy bluish exhaust.
In either case 4-month top-ups suggest your engine is not in good condition.

If you had to top up the oil just once after having the oil changed, they may have forgotten to fill the filter and rechecked the level after starting and running the engine.

Posted: Jul 20, 2021 02:17PM
Thanks for the response.
im not sure the correct terms, but it seemed a spark plug end broke off and went into the engine. something with 2 coils they said.
this is only after 67k miles on the car, its such a shame. the car has easily cost more to repair than the original cost of the car.

i think im going to cut my losses and let this car go. afraid it will cost more in the long run trying to keep this one alive.

The 2010 Cooper S Convertible uses the N14 engine. The same engine is used in the following models: 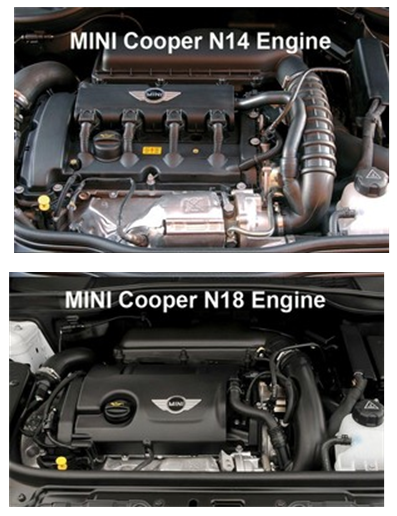 Posted: Jul 19, 2021 06:20PM
hi Everyone. i have a 2010 Cooper S Convertible that needs an engine replacement. does anyone have any suggestions or experience on this? i would like to try to save the car, but not spend what MINI will charge for this. any mechanic recommendations or advice on buying a used/salvaged engine? im located in New York city.  thanks!
Please Wait