Posted: Oct 11, 2021 11:00AM
According to the Bentley manual, the fuel pump relay # K96 is one that is soldered onto the backside of the fuse panel. So yes, you will probably need to replace the entire fuse panel board if the relay is bad.
Return to Forum Quote Post Reply

Posted: Oct 8, 2021 06:45AM
Thank you for the wiring diagram, Ken, that helps a lot. It is my understanding that if the relay in the kick-panel fuse box is bad that it is not replaceable and a new fuse panel needs to be installed. Is this correct?

I'll get to checking for bad wires/grounds. 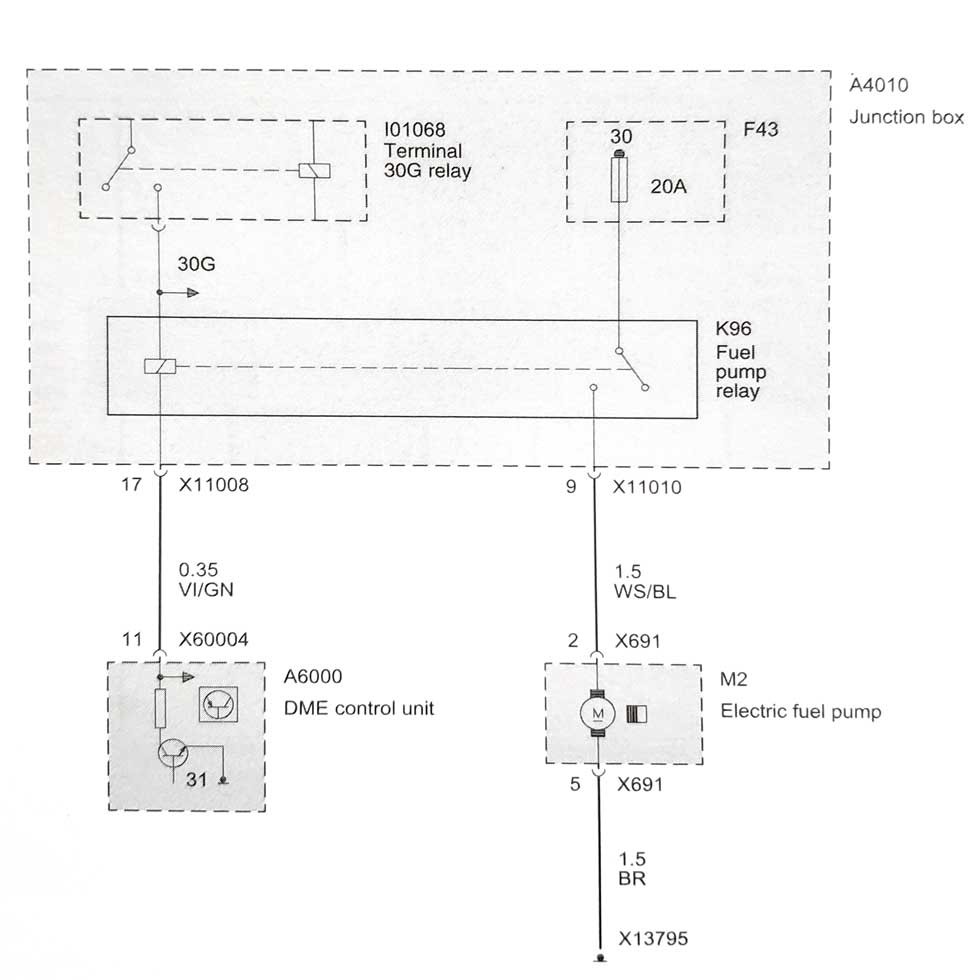 Sorry for being a pest but I am already way above my mental capability by getting this far trying to solve the problem.

Based on what you have replaced, it 'sounds like' the computer is not allowing full pressure based on inputs from other sensors:


Volume Control Valve
The volume control valve is connected by means of a two wire circuit to the ECM. It receives system voltage via the ECM main relay.
The ECM drives the volume control valve pulse-width modulated on the ground side.
The required fuel delivery pressure is determined by the engine-management system as a function of engine load and engine speed.
The pressure level is registered by the rail pressure sensor and transferred to the ECM.

The volume control valve is a part of the high pressure fuel pump.

Not sure what else we can suggest...  it is very difficult to accurately diagnose a problem remotely...

Posted: Oct 5, 2021 12:07PM
I had replaced the fuel pressure regulator attached to the rail. Is this the same as the pressure sensor or is it a different part?
Return to Forum Quote Post Reply

Posted: Oct 3, 2021 07:23AM
Here's the deal: I bought a 2010 Mini S in July and drove it 100 miles to home. It ran great. After a week of driving it started showing signs of distress and finally left me stranded on the roadside. Using a scanner, I found that I had low fuel pressure so I went to work to try to solve the issue. At this point I have installed a new fuel filter, new LPFP, rebuilt HPFP, and new fuel regulator. If I jump from a separate battery to the fuel pump the car starts immediately and runs great with 700 psi fuel pressure. If I attach the fuel pump connector, the car will not start and produces negligible low pressure fuel pressure.

While it is running on the separate battery I checked the voltage at the fuel pump connector and it is getting alternator voltage, 14 volts. Checking the unplugged connector while cranking shows 11.4 volts which would seem to be enough to produce fuel pressure when reconnected to the fuel pump.

I have replaced the relay in the engine compartment and the fuse in the kick panel is good and is receiving full voltage.

I'm kinda stuck at this point so I am hoping that people smarter than me (that won't take much!) can chime in with some suggestions.