HOW TO CONVERT FROM GENERATOR TO ALTERNATOR

HOW TO CONVERT FROM GENERATOR TO ALTERNATOR

Minis built up to 1969 (i.e. MKI  &  MKII) were positive ground;  MKIII and onwards were built negative ground.  In any case it is advisable to check since your car might have been changed by a previous owner.

Alternators come in either polarity, however most later ones are negative ground, in which case the  alternator will have a  “+”  sign next to one of its large output terminals.

This will cause problems with tachs, radios, or other electronic accessories.

Bolt the unit on in place of the generator, noting that you have  removed two wires from the generator ( a thick one and a thin one.) Push the thick wire with the large connector on either of the large spade connectors (usually marked “S” or “+”) on the alternator. The small wire goes on the terminal marked “IND” or “WL.”

Locate terminal “D.” Remove the brown/yellow or plain yellow wire, and connect it to the brown/green wire disconnected from terminal “F” in step 2 above. Insulate the connection.

Remove the remaining wires from terminals  “A1,” “A,” and “D,” connect them all together. Insulate the connection.

What you’ve accomplished is this: The thin wires from  “D”  and  “F”  now feed the ignition warning light, the black one from  “E”  is a ground, and the remaining ones from  “A1",  “A,”  and “D,”  all connect together, take the output from the alternator, and feed it to the headlight switch and to the battery.  As you may have noticed the alternator probably has two large spade terminals, as mentioned  “+”  and  “S.” These are both the same and can improve your system by putting in an additional cable between the spade terminal on the alternator and the starter solenoid.  On the solenoid this extra cable should be connected to the same terminal as the main battery cable ( not the starter motor feed.) Use only thick heavy wire, min 12AWG (see diagrams below with wire marked "New" that goes to the + end of the solenoid).  This will make the system more efficient by reducing the voltage drop, especially when the alternator is putting out a lot of AMPS.  If required, a radio interference suppressor, 1UF capacitor, can be connected between the  “S”  or  “+”  terminals to ground.

This is the diagram for screw terminal boxes:

Screw terminal boxes allow for a sturdy terminal to connect jumpers. See the next diagram for the spade terminal box. 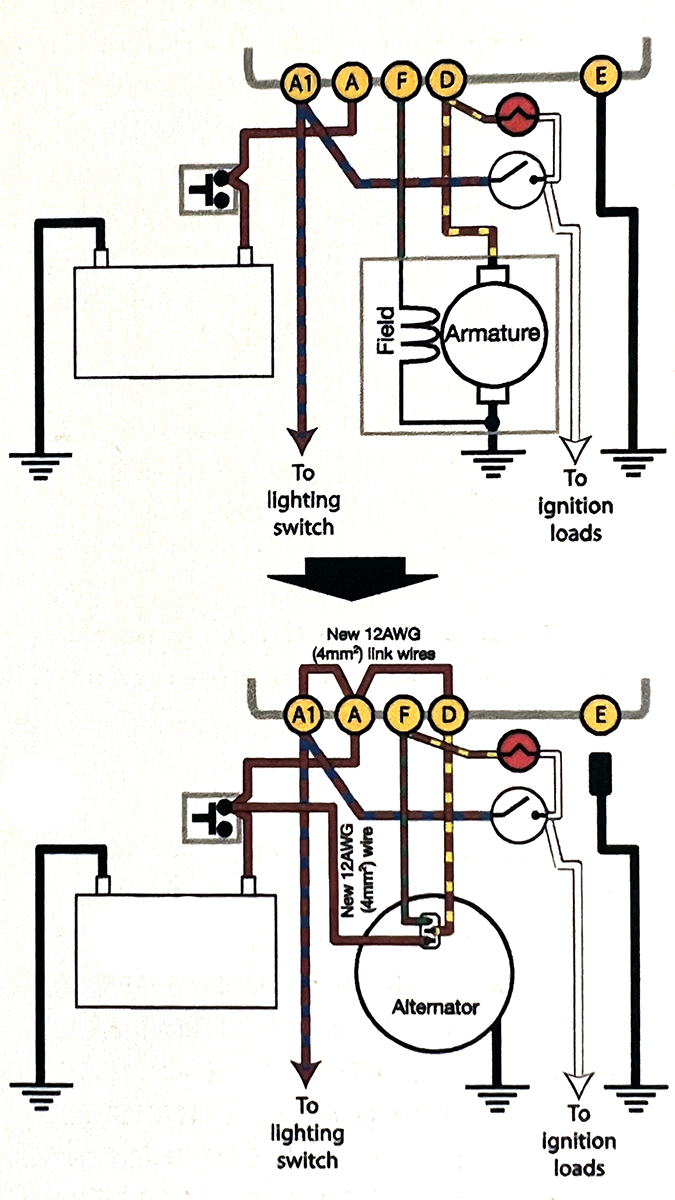 This is the diagram for spade terminal boxes:

This set-up has the wires all crimped together rather than connecting at the box (make sure that the wires are securely crimped together and then properly insulated against making contact with the bodywork or anything metallic or this can lead to fires). In this case you can remove the regulator altogether or leave it in place. 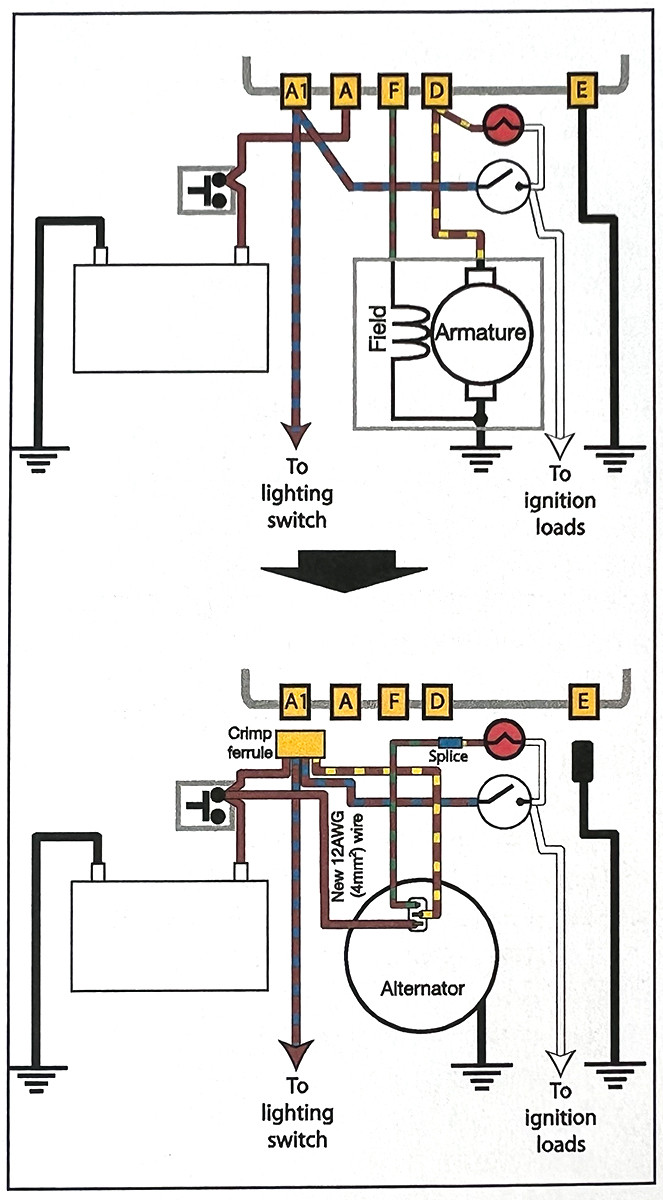 Alternator, alternator mounting bracket ( it’s longer than the one for the dynamo, since the alternator is much shorter,) maybe a new fan belt, battery clamps, insulating tape.

Have a Question or Comment of your own? Click here!
8 Comments
From:
Cheleker
Date:
08/18/2013 @ 8:39 PM
Comment:
Andy, Odd question to ask in an article about converting from a generator to an alternator! Pivot point, piston and springs hold the shoes in place.
From:
Andy
Date:
08/17/2013 @ 4:35 AM
Comment:
How are the front brake shoes held on the bakkingplate, or are they just held with the pivot one side and the piston on the other side?
From:
Cheleker
Date:
06/09/2013 @ 8:46 PM
Comment:
This would be a good question (with more people seeing it) by posting it on Mini Mania's web site.
From:
Jason
Date:
06/08/2013 @ 12:10 AM
Comment:
Am having trouble converting, I have a 67 deluxe and have followed the above instructions however I do not seem to be getting any output out of thLRA100 Alternator which I have put on, any ideas?
From:
Cheleker
Date:
06/27/2012 @ 9:05 PM
Comment:
If you need more information than that contained in the article, your workshop manual will have wiring diagrams for cars with both generators and alternators standard for comparison.
From:
joshuajessip
Date:
06/27/2012 @ 12:19 PM
Comment:
Is there a wiring diagram for the altinator ?
From:
Dominiv Barth
Date:
06/08/2011 @ 12:52 AM
Comment:
Have problems with indicator and stop lights.Must you leave the relay in place?
From:
Red Mist Rally .co .uk
Date:
08/06/2010 @ 11:58 PM
Comment:
How do I remove the control box completey, using an alternator which is self regulating, what will the wiring need to be like
Please Wait