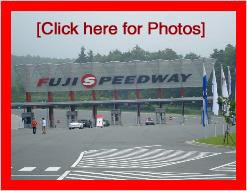 Mini Mania Inc. was honored with an invitation to the 30th Anniversary celebration of Nicole Racing Japan at the Fuji International Speedway in Japan on June 29th, 2007. Don Racine, president of Mini Mania shipped the Mini Mania track car and participated in the festivities at the speedway.

Over 1,000 Nicole customers and guests attended the event. They were treated to a special display of cars, exhibition laps by different marques, a catered lunch for every guest in the VIP suites overlooking the pit lane, and parade laps for all in attendance. This was Nicole Racing’s biggest event to date.

Fuji International Speedway (FIS) located in the foothills of Mount Fuji, hosted the prestigious Formula 1 series in the late 70’s and is host to the 2007 F1 Japanese Grand Prix. The recently renovated twelve corner 2.8 mile FIS track, owned by Toyota has the longest straight (1.5 km, close to a mile) of the F1 championship series.

The Fuji International Speedway is an ultra modern facility with a very challenging track. Here is a description of a lap on the track by Don Racine:

"A racing lap around the raceway in MINI can be a real eye opener! You enter the course from the paddock about 100 yards or so from the turn

1. Turn 1 is at the end of the mile long front straight and is an off camber, tight down hill right hander. The next turn (turn 1A), is a slight right hand kink that will almost disappear after some experience on the track.

The left hand Turn 2 is approached at the top of 3rd gear and requires a quick downshift into 2nd. The wide right hand half circle of turn 3 (180 degrees) can really catch you out if you don’t anticipate the long duration of the turn. But end it does and abruptly transitions into the left hand turn 4 (another 2nd gear turn). The exit of turn 4 is important as the double bend right hand turn 5 is absolutely flat out.

The Mini Mania MINI Cooper “S” stuck like glue through the very fast corners and we often saw the tach max out in 4th gear as we approached a very, very sharp right hand turn 6. This turn consists of a sharp right immediately followed by a sharp left and then a little less severe right.

The short straight leading into turn 7 still found us in 3rd gear. Turn 7 is a 100 degree right hander that is difficult at best as the following turn 8 is a very short distance away and easy to screw up! Turn 8 is a decreasing radius left hand turn that is uphill and has a severe left hand hook right at the end of the turn.

We had to go a long way to find a race track that really tested all the powers of the Mini Mania MINI Cooper S and thanks for Nicole Racing Japan, it was all possible. The fastest straight we have ever run with some of the tightest technical turns in the racing world provided a real showcase for our MINI!"