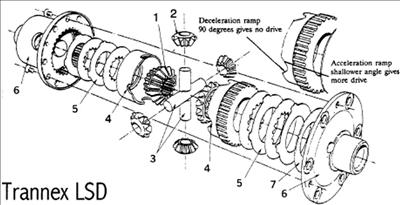 950s design with 1990s engineering and technology - originally done by the inimitable Davc Hirons at Trannex, now under the EVO banner at Mini Spares Centre following their buy-out of all the Mini/Sprite Trannex products some years back now. The only real similarity to the old Salisbury is the 'plate type' design - purely because it gives maximum frictional area, therefore most effective performance.

Two round cross pins, located in four curved wall cut-outs (ramps), cany four planet wheels (one at each pin end) which engage a pair of sun wheels housed in a two piece drive drum. The drive drum halves have a pack of special between each end and the outer casing pieces. When a difference in traction occurs, the sun wheels (1) engage the planet wheels (2) turning them and so forcing the pins (3) to move up the ramps (4). The amount of slippage allowed is controlled by the frictional force developed between the plate packs (5) and outer casings (6), the resultant torque bias being applied to the sun wheel connected to the axle with most traction. But that's not the end of the story. lntelligent and careful design features net some very desirable attributes. Substantial cross pins running in isolated drive cases eliminates the breakage previously suffered in the Salisbury unit by removing the bending stresses. Their round cross'sectior and matching curved ramps {acilitate changes to the locking action on acceleration and deceleration of the diff. Varying the plate pack configuration alters the percentage of torque bias. Pre-load is set by a disc spring washer (7), Requires gearbox casings to be modified to fit along with output shafts to suit either poFjoint or Hardy Spicer application and LSD type crown wheel and pinion. Using the Hardy Spicer type outputs for this diff will also need the special Stype diff side plates. 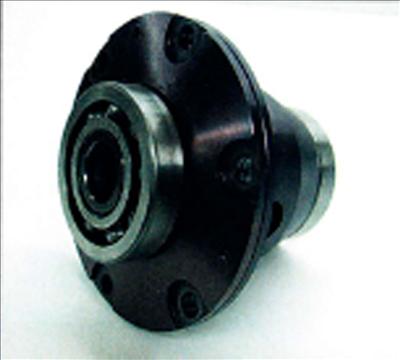 Further ramp angle adjustments have to be done by manufacture. Needs driver 'participation'.

Excels everywhere. Harder work than others on the road.

A very sophisticated Salisbury. Well made and multi-adjustable. Better than other diffs as it holds the car straight using much less pre-load -which wastes less horsepower. lts ability to lock/unlock in the 'race' spec/conf iguration makes corner entry and exit much better and easier on the biceps. Less castor angle is needed too. lt can be a little sensitive to getting on and off the throttle, so don't be lead footed - reminding us that smooth is fastl The plates seem io last quite a long time so low service costs, Testimony to this one, and proof it works properly, comes from my mate Bill Gilcrease, GT5/lite racer in the States - "1 broke a CV in one race, but finished the race 25 laps later driving one wheel. A feat not possible on any other diff - period!" My current choice in my Clubby racer. 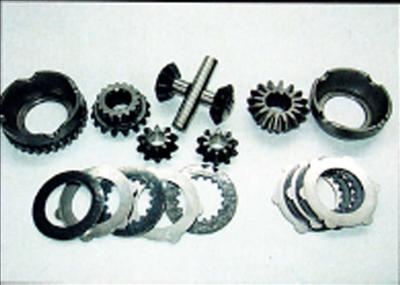 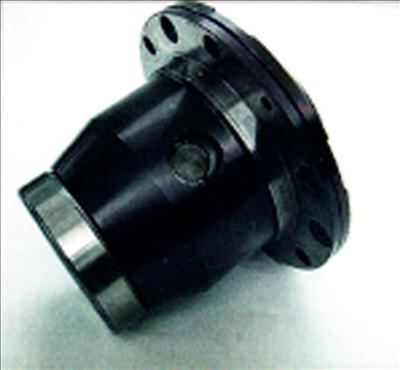 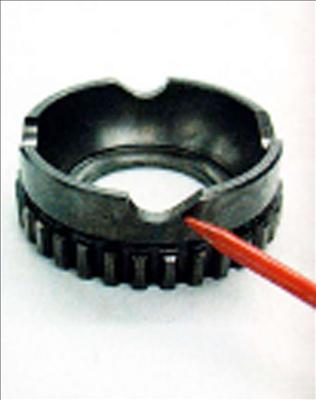