The Mini was introduced in 1959 and by 1960 it was setting it’s first records.  The Mini was conceived and originally produced as an entry level car to hold four people, carry them around the city and get good gas mileage!  The evolution of the car meant they it quickly became the standard of the industry for a “pocket rocket”!  The first model was introduced as a plain jane model with an 850cc engine and drum brakes on 3.5”X10” wheels.  By 1965 the “S” model included a 1275cc engine with disc brakes, optional wood dash,  gold embroidered interior trim and 6” X 10” wheels.  Current production of the Mini includes every goodie imaginable with 5-speed gearboxes, 1275cc engine with fuel injection is now standard. 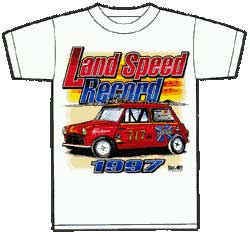 Production of this now piece of history model of English automotive genius is almost to an end.  The current plans call for a brand new Mini to be introduced in 1999.  BUT the record book on this now very old designed model is still not closed.  In the UK there are still spec class races, Hillclimbs, etc.  in France and Germany the Mini is more popular than ever and in Japan the car has a cult following beyond belief.

In the USA the car is still raced actively in SCCA and Vintage races even though the last official year the car was imported into the US was in 1968.

And now a new record has been established for the Mini in the US - A Land Speed Record at the Bonneville salt flats!  The little square econo box Mini was never intended to out of the city yet alone on the salt flats.  The aerodynamic qualities of a Mini are those of a brick!  The original “S” power unit was rated at 72 HP!  This does not sound much like a Land Speed Record car.  But time and the aftermarket has been good to the Mini, the Mini today can be made to have 150 HP and a 6 speed transmission!  All records have criteria around which they are based and the Land Speed Record is no exception.  The class for the Mini record specifies under 1500cc and a production volume of over 500 models a year!  Millions of Minis have now been sold and since the engine is still a 1275 this small bore production class was the target.  When the Mini was introduced in ‘59 it’s market competitors included the VW and Morris Minor.  It is only fitting that the record in our production class was held by a Volkswagen Karmen Gia! 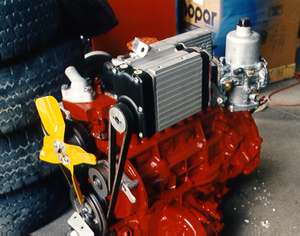 The decision to go after the Land Speed record in the Mini was almost accidental.  The intrepid father and son team of Dave and Clint Crain wanted to go Vintage racing where the Mini is extremely competitive!  BUT Dave & Clint live in a small town many hours drive from the closest race circuit.  That’s the bad news, the good news is that they live in Wendover, NV which is only 1 exit away from the Bonneville Salt Flats in Utah!  (Their Wendover Garage is the ONLY source for the racer that forgot something!)  The easy and natural thing was to set up the Mini so that it could compete in Vintage and  test on the Salt Flats!  Now the Flats are now on the endangered species list and thus you better not get caught running your car on the flats without participating in an official sanctioned event.  Thus the bug had bitten.

The Flats have been THE place for setting records since there were records.  But the years have not been good to the flats.  When records were first set the dry lake bed of Bonneville had a crust of salt almost 4 foot thick!  Today it is only 2 1/5 inches!  When it rains today the lake bed tries to return to it old self and quickly it could become a boat race!

The word about the effort to reset the record in a Mini was slow to spread but when it did, it quickly became an internationally supported effort!  The Team Mini Mania group quickly expanded to include support from the largest English supplier of parts for the Mini, MiniSpares of London.  Even the factory got into the act by providing support from the newly rejuvenated Special Tuning department of British Heritage.  They provided an extremely helpful tool in the form of a 6 speed tranny for the Mini!  With this level of support the effort was quickly expanded to include a second car provided by Dean Snipenger of Computer Car, a Mini Mania distributor in Denver.  FIVE classes were identified as being targets for the record effort.  The Mini Mania Supercharger Kit was installed on a stock 1275cc engine for the “Blown Altered” class.  A 998cc was set-up to run in stock form and with a Computer Car designed Turbo charger for the under 1,000cc class.

The Mini can now claim yet another set of records!  “LAND SPEED RECORD HOLDER”!  The record set in the production class was 118MPH!  Two other records were established!  While all the targets were not quite achieved, the performance was remarkable for a car that recently celebrated 35 years of production.  The Mini legend lives on and it is hoped that the new Mini when introduced well live as long, do as well and will someday, hopefully be imported into the US!