Don't let the title mislead you. Perhaps you were expecting an article examining a mysterious decline in the bee population. If so, you might be disappointed . . .

This is a story of an Austin Mini Cooper S. The car is bright yellow with black trim, which is exactly the way it looked when won the SCCA Class C Sedan Racing championship in 1972. Don Racine, the owner of Mini Mania, acquired the little car recently and nicknamed it the ”Bumble Bee”. 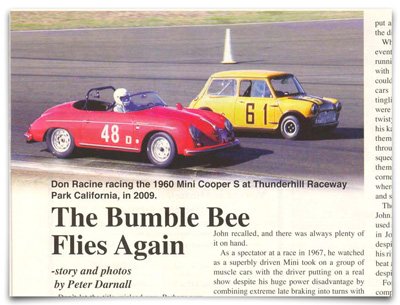 John Unsbee, the Bumble Bee's previous owner, kindly assembled his personal recollections together with many photographs of his racing experiences with the Mini and passed this material along with the car. Don, who knows these cars as well as anyone, recognized the value of the records and commented::”One of the best parts of racing a vintage car it to be able to preserve and share its history . . . and this story definitely needs to be shared.” Let the story begin:

John Unsbee raced Quarter Midgets as a youngster. His father’s company maintained traffic signal lights for the City of Chicago. John's cars were always painted yellow; the same yellow paint that his father used on the light poles. The yellow color was distinctive, John recalled, and there was always plenty of it on hand.

As a spectator at a race in 1967, he watched as a superbly driven Mini took on a group of muscle cars with the driver putting on a real show despite his huge power disadvantage by combining extreme late braking into turns with an aggressive broad-sliding cornering technique. John recalled:”The Mini’s roof was about at the door handles of the muscle cars as he would lean over on them through the corners.” The crowd was wildly cheering for the Mini and John remembered being completely caught up in the enthusiasm. Someday, he promised himself, he'd drive a Mini that way too!

In 1970 John Unsbee acquired a used Mini race car with an MG 1100cc engine that sported a roll bar but very little other competition equipment. He admired the flamboyant driving style of British Mini driver John Rhodes and planned to perfect the tire smoking technique in a local Driving School. Unfortunately the instructors were not favorably impressed with his aggressive driving punctuated by frequent off course excursions. In his recollections, he wrote that he nearly flunked out of the school “even though [one instructor] said I was the best young driver he had ever seen . . . he personally thought I was dangerous and had no business on the track.” After Drivers' School, John Unsbee joined forces with his brother, Randy, and Chief Mechanic, Bill Peterman to form PURE (Peterman Unsbee Racing Enterprises) to race Minis. The team was seriously under financed, but by the end of his rookie season, John showed that he could compete successfully with an SCCA Nationals Runoff car despite his underpowered MG engine when they came within a single point of winning the Midwestern Council championship.

In his recollections, John Unsbee admitted to being “something of a controversial figure” in those days with his [unconventional] appearance, long-haired hippie girl friends and the yellow Mini flaunting peace signs on the headlights covers. “Basically let’s just say I was a bad boy - but very, very fast when I managed to put a lap together without sliding sideways in the dirt...” When officials saw John Unsbee entered in an event, they would often combine sedan classes, running the smaller B and C Class cars together with the big Muscle Cars. They knew Unsbee could hold his own against the more powerful cars and that the spectators loved the spinetingling action. The larger engined machines were much faster on a long straight, but on a twisty course, John could stay with them using his kamikaze style. In his words: “I would catch them [braking for Turn 1] and zigzag down through them and go sideways down the inside squeezing through the tiniest of gaps forcing them offline, and then beat them out of the corner ... until we got to the long straight again where they would all go by flashing me the bird and shaking their fists.”

The 1971 season ended in a disappointment for John. The Midwest Council of Sports Car Clubs used a convoluted system of scoring that resulted in the John's Mini losing the title by one point, despite the fact that he had won more races than his rival. Nonetheless, he'd proven that he could beat an SCCA runoff car by pure driving talent, despite having only an MG 1100 engine. For the 1972 season, the team decided to compete at the SCCA National level. They were able to obtain parts from a wrecked street Mini and upgraded to Cooper S specifications. As they approached the end of the competition year, they needed six wins to clinch the title. The Pure Team came through in great style, winning a perfect six races in six starts to take the Championship. After that performance, John parked his Mini in a garage to pursue other interests.

The incredible underdog struggle of the Pure Team was over.

Don Racine and his son, Dennis, went to Las Vegas to pick the car up in early October. Undaunted by the forlorn appearance of the Mini as they rolled it out of the garage, Don promised to have the car ready for the CSRG Season Finale at Thunderhill, which was then just over three weeks away.

The frustrating restoration of the Mini is fully documented on the Mini Mania website. The project proved to be more difficult than originally contemplated. On the website Don used the words 'crazy', 'bold,' 'stupid' and 'egotistical' to disparage his brash commitment to return the Mini to the race track in less than a month. But the wide grin on his face at Thunderhill clearly indicated that he had no regrets. The Bumble Bee is back!

Reprinted with permission from Victory Lane Magazine, the Vintage and Historic Racing News Magazine. Victory Lane, a monthly news magazine, has been covering the vintage racing scene for 25 years. For information on the sport of vintage racing and/or a subscription call 800-818-5624.