What are these empty goes into/out-of's not used on my Mini MK I?

Posted: Nov 30, 2022 04:47PM
it's worth buying a Haynes manual for every car you own but especially for a mini.  Search for the book that covers your year/ and engine.
Return to Forum Quote Post Reply

Posted: Nov 30, 2022 03:35PM
Others have addressed the question of the two holes in the clutch cover.  You should install a clutch lever tab, p/n 23601 and install a proper clutch lever return spring.
Return to Forum Quote Post Reply

Edited:  Nov 28, 2022 02:42PM
best way I have found to post a pic (i also struggled loads with this) is to click the insert/edit image (shown in the pic) and have a link to it. Since you have an image hosting location, just paste in your source url (i.e.: www.example.com/image.jpg)

I had issues manually adding an image using the syntax:"[ img ]//www.example.com/myimage.com[ / img ]"


And dragging and dropping images didn't seem to work either, but that may have been due to size issues.

Should there be a hose or two going to/coming from these to somewhere else?

Thanks for any help!
Dan

Here is the picture at the link above: 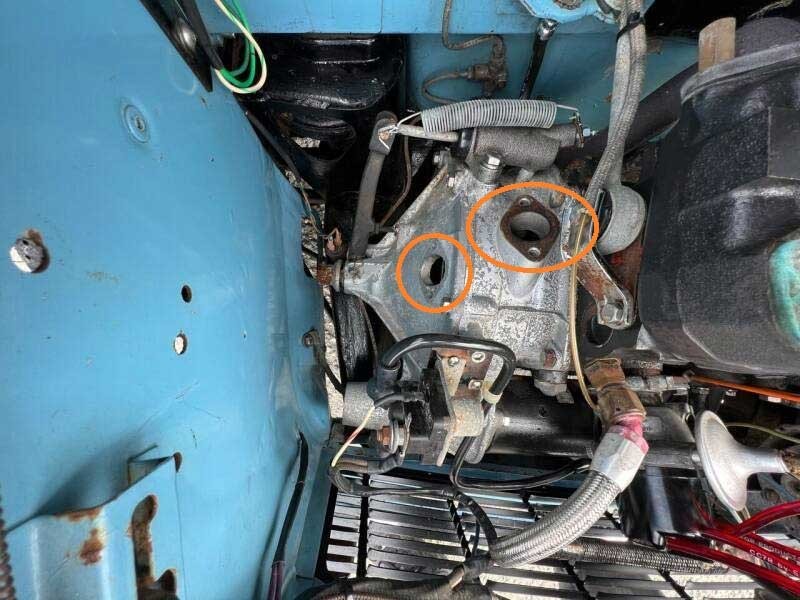 Regarding the image, I tried several copy/paste techniques without success. As instructed by the posting instructions, I was forced to use a link in the message.
Return to Forum Quote Post Reply

Both holes should be covered up asap.

The LH one is 'just' a hole to see the timing marks, but anything that drops in there will get fired around the flywheel housing.

The RH one is a hole directly into the engine & gearbox !

If you don't have the breather cannister, find one or fit a blanking plate.  If you've got a timing cover breather the engine will survive short term with it blanked off, but long term you really need to fit a proper breather.  In the meantime, if anything solid goes down that hole it could destroy either the engine or the gearbox.  Although the breather hole is nominally baffled, you WILL get wet oil thrown out of it if it's left uncovered.

Attached is a photo of my engine, a 1275cc A+. Your setup may be quite different.
You can see the top of the white windshield washer bottle. Just behind it you can see the black crankcase breather bolted to the clutch housing. The canister is there to collect oil vapour/droplets so they don't get sucked upward. There is a black hose from the top of it leading to a port on my carb, along with a Y-connection to a similar hose coming from front end of the engine where there is a similar canister.

Early engines had different setups. The most common was a small tube (10mm+/-?) coming up from the top of the valve cover and turning toward the firewall. A hose was connected from it to a port on the air cleaner housing - the carb just sucked any vapours into its air stream. Other variants had a similar had a similar tube on the back of the engine, coming out of a metal cover for the valve tappets.

Posting pictures can be simple. The best way is from a computer, not a smart phone. You also must reduce the file size of the photo for it to be accepted. You can then drag and drop the photo file onto the big green dot in the editing mode.

Post some other photos of your engine so we can determine what you have and need.

Hey Dan!!! Thanks for the clarifications!

Wrt the picture, I tried various copy/pastes and had no luck.  Had to resort to a link in the msg, as the posting directions stated.

I'll check on the bottoming out for the breather.  If a hose is needed, is there a companion hole at the intake I should look for?

Posted: Nov 1, 2022 07:44AM
Welcome! Nice to have another "Dan" around the place.
(kermy's comment about suspicious links stems from the spammers we often get here. They typically open a new membership, post something and attach a link that has nothing to do with Minis but leads to a dubious, possibly phishing or attack site.)

The hole on the left is a view port to see the timing marks on the flywheel. When No. 1 cylinder is at top=dead-centre, you should see a mark with a "1" and a "4". Cylinders no. 1 and 4 reach TDC at the same time though their valve timing is different - one would be at full compression while the other one is at full exhaust. This hole should have a cover plate.

The hole at the right is a crankcase breather port. On some engines there is a black canister with a hose leading toward the intake system. However some engines do not use this and the hole does not go all the way through. Put your finger in and see if it bottoms out. If so, it stays as we see it. If it is open, you need the breather system.

Posted: Nov 1, 2022 07:27AM
post a picture directly in your message, not a suspicious link.
Return to Forum Quote Post Reply

Should there be a hose or two going to/coming from these to somewhere else?

Thanks for any help!
Dan

Here is the picture at the link above: