The sheer volume and diversity of bolt on goodies available for our cherished Minis underlines the fact that a very large portion of them is modified in some way. Be it just dress up items to personalize it aesthetically, or tuning parts to improve performance. In the latter’s case, either more power or more economy are sought - both being desired by many. Should it also enhance the looks at the same time, so much the better. Unfortunately not many components can achieve this without integrating with a number of others. The exhaust system, however, is one of the few.

Although the exhaust’s efficiency and effectiveness is reliant on a well matched system from the exhaust valve in the cylinder head to the tail pipe, the majority view it as two separate pieces - the exhaust manifold, and the ‘system’. Not entirely mis-placed, as this is how vendors present them - folk buying one or the other, though mostly both, dependent on guidance and or budget. Contrary to popular belief, the system actually has a greater effect on both power and economy than the manifold and generally produces more performance per pound spent. It’s also far easier to fit than the manifold and first to rot and fall off. Consequently, getting to grips with what the exhaust system is all about will help in making a decision as to what to look out for when making a decision on which product to buy.

Mental Exhaustion
Don’t worry, I’m not going to bend you’re minds with exhaust gas science - not just yet anyway. Besides which, our dear little Mini with it’s five-port head design pretty much runs amok through it all, not possessing the ideal one-port-per-cylinder like most other boring and normal cars! But a little understanding of what’s important will help you in your selection dilemma.

Let’s start with a quick and basic look at your Mini engine’s basic functions. Ultimately the end product is energy to drive your Mini along. The engine is a four stroke - induction (piston takes in fuel/air mixture), compression (piston squeezes mixture), ignition (mixture burns - the power stroke), and exhaust (piston pushes burnt gases out). Unfortunately only the power stroke produces energy, the others consume it. The more they consume, the less there is to drive your Mini down the road. The main aim in modifying/tuning the engine to produce more power/economy is to reduce the energy consumed by the three ‘wasted’ strokes (pumping losses).

We’re only interested in the exhaust stroke here. Initially it absorbs power by having to physically push the burnt gases out. To minimize this effort, the exhaust system needs to be as un-restrictive - ‘free flowing’ - as possible. Standard, and unfortunately a number of so called ‘performance’ exhausts, cause excessive power losses because of their designs - the restrictive nature causing ‘back pressure’. Back pressure is the result of an exhaust with poor flow efficiency. To compound the problem, back pressure doesn’t stay a constant. The higher the throughput of gas, the greater back pressure becomes. In fact it rises at something like the square of the engine’s gas throughput. So the more power developed/the bigger the engine, the greater back pressure becomes, consequently sapping more and more power. 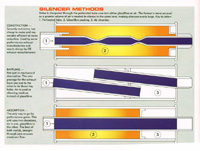 Take a look at the relevant diagram (right) to see why. The briefest of examinations will enlighten you as to why a straight through exhaust is offered by most Mini specialists. And seemingly the bigger the better - surely this would ensure minimum restriction and be totally free flowing? Many misguided vendors believe so, offering exhausts the size of drainpipes as the ultimate performance exhaust. But they’re wrong. There are two more important features in exhaust gas behavior that need to be considered - speed and sound.

Speed Freak
On the exhaust stroke the piston pushes the exhaust gases out past the opening exhaust valve, starting the ‘slug’ of hot gases on its way. The slug of exhaust gas needs to maintain sufficient speed to ensure as much of the burnt mixture is extracted as possible so as not to dilute the incoming fuel/air mixture. Most folk assume that the exhaust only travels in one direction - down the pipe and into atmosphere. However, at small throttle openings (low rpm/light cruising speed) it actually slows down and reverses flow.

As the piston nears and reaches top dead center, the inlet valve has started to open leaving both inlet and exhaust valves momentarily open together - called the ‘overlap’ period. This period can greatly reduce power/torque if the out-going exhaust gases contaminate the in-coming fresh fuel/air mixture. The hotter the cam, the greater the overlap period, the more dilution can take place.

How does exhaust system size affect speed? Bigger diameter pipes allows the hot exhaust gases to expand, slowing them down. The earlier the exhaust gases encounter a bigger bore, the sooner they slow down and reverse flow. This accentuates the low rpm/light cruising speed problems, making hot cams run even more erratically. Using a system with correctly sized pipe diameters the exhaust gas speed is at least maintained, if not increased, therefore taking longer to slow down and reverse flow at the end of the exhaust stroke. One of the major benefits making ‘hot’ cams come in sooner, and run better at low speed.

Sound or music
There are two parts to this. ‘Sound’ as in noise, and ‘sound’ as in waves. Dispensing with the easiest to explain first, the bigger the pipe diameters, the more noise the exhaust will make, the harder it will be to silence. This has much to do with the next part, sound waves. As the exhaust valve opens towards the end of the power stroke, a slug of high-pressure exhaust gas is ejected, sending a positive pressure pulse wave (a very strong sound wave more commonly called a ‘shock wave’) hurtling down the pipe. Traveling at something like 1300-1500 feet per second - substantially higher than the normal speed of sound due to high temperature - it pops out the pipe end, creating what’s commonly called a ‘reflection’.

This comes in the guise of a negative pressure pulse wave, and hurtles back up the pipe towards the exhaust valve. No, it really does! If this wave gets back to the exhaust valve whilst it’s still open and in the over-lap period, it helps suck out residual exhaust gases. Even better, it can also reduce the combustion chamber pressure to below atmospheric pressure, actually starting the intake charge flowing before the piston starts moving back down the bore on it’s induction stroke. Sort of ‘super charging’ the engine by increasing volumetric efficiency (total amount of induction charge sucked in). The more charge you get in, the more power you get out. These ‘shock waves’ also create the pinging, drumming, thudding noises produced by the pipe.

How does size affect sound? As mentioned earlier, the bigger the diameter the harder it is to silence; more of a space problem than anything else. The bigger diameter the pipe bore is, the proportionally bigger the silencer needs to be to cope. For excessively large pipe diameters there simply isn’t the space under the car to fit a suitably sized silencer. Consequently using a really big-bore system produces horrendous drumming at low rpm/light throttle/cruising speeds, and a right din when the (literally) ‘loud pedal’ is floored.

Pipe diameter has less of a direct effect on shock waves as they’re more dependent on temperature and pressure - so it’s speed is pretty much a fixed quantity. ‘Tuning’ the shock waves is therefore done by altering the pipe’s overall length - the reason why in some circumstances a pipe going straight down the middle of the car will give different results to one exiting in the more normal position - the former being shorter than the latter. Unfortunately it rarely gives more performance. Having said that, shock waves only really has an effect over a very narrow rpm range - around 3-400 rpm. Optimising lengths to maximise potential performance increases are mainly affected by the manifold - for more information see 'Exhausts - Manifolds, use'. However, careful development of the system shape can be used to good effect. More on this later. For now, exhaust systems are generally fixed in one of two lengths as mentioned above.

Little or Large?
We can now apply our newfound knowledge of exhaust gas behavior to selecting a suitable system. Despite the plethora of systems available, the most reliable from a performance increase point of view will be those that have been around for some time; largely because more recent systems are either copies (generally poor ones), or purely made for aesthetics (huge bores and multiple tail-pipes). The longer-standing exhaust systems manufacturers established long ago the optimum sizes, shapes, and lengths as far as exhausts for Minis go. Boosted by the sheer volume of folk racing, rallying, and tuning them. Consequently they’ve been distilled into a few very effective systems.

Size-wise, a bore diameter of 1.625” is more than ample for practically any road engine. Right from 850 up to 1400+, where power outputs don’t exceed 125bhp or so. Even then, going to a bigger size - say 1.75” or 1.875” bore - will only gain a few extra horses right at the top end of the rev range - OK on a racer where the engine is flat-out all the time, but on a road car the benefits of increased gas speed and getting a hot cam pulling power in earlier far outweigh the slight hp gain. Conversely, fitting a 2” system to a small-bore engine (850/998/1098 based) will actually loose power because of it’s relatively small through-put of exhaust - the huge bore increase prematurely slowing the exhaust gases, bringing about the unwanted effects outlined earlier. Using a 1.5" bore size instead of the more common 1.625" can have marginal gain on a small-bore engine. But I stress these are small. The uncommon pipe size being reflected in its price. Given the choice of the two different lengths generally available, the longer side-exit type almost always gives the best over-all results.

Silence of the Lambs
Looking at the supporting diagrams again, you can see the three main methods of silencing an exhaust - constriction, baffle, or absorption. As far as performance improvements go, constriction and baffling are dirty words! Neither of these produces performance improvements purely because they work to restrict the flow of exhaust through the system. The only one that gives optimum performance gains is absorption. Applying silencers using this method for silencing gives the ‘straight through’ appearance - and maximizes exhaust flow.

Many believe that ‘straight through’ means ‘more noise’. This just isn’t the case, so let’s get this straight - just because a system is quiet doesn’t mean it’s ineffective. A properly designed ‘straight through’ system with correctly proportioned silencer boxes will give both maximum flow and civilized noise levels. Conversely, just because a system is noisy doesn’t mean it’s efficient. This is more of a feature of its size than silencer type. The only silencers on the market of a seemingly correct size that make quite a row, and folk think they’re a ‘performance’ exhaust, use the constriction method. From earlier comments, we know that the larger the bore, the more difficult it is to silence adequately.

Conclusion
Picking the juicy bits out of the fore going then, the most efficient exhaust system you can fit to our Mini to provide optimum performance (both power and economy) will be one that maximizes gas speed, shock wave tuning, and fits well. So you want one that’s got a 1.625” bore, follows the standard exhaust route to give best length, and has straight through, efficient silencing (two silencers usually needed to get noise down to a sane level), and is well made for an easy fit. A good finish will help in the aesthetic stakes too! That'll be the RC40 then, or more recently the Mini Spares Millennium range.