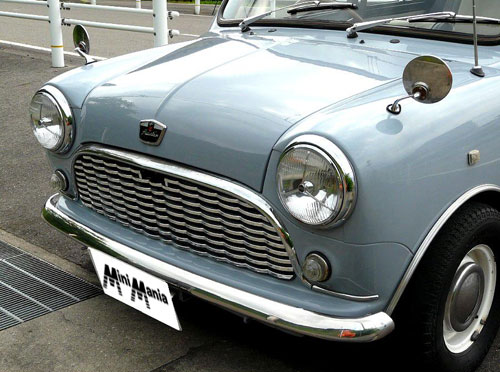 The following is a quick summary of the basic Mini grilles used on the English made cars and is focused on those grilles still available in reproduction form. It does not cover the Clubman variations or those used on the Riley Elf and Wolseley Hornet, all of which are no longer available. Minis made other than in England had the same or similar grilles, for the most part, but grilles may have changed at different times in manufacture than in England, or, like many of the Italian made Innocentis, may have been entirely different looking.

Looking to Replace Your Mini's Grille?
Check out our

Starting with the easy one first, the English made Pickups, Vans and Mokes did not have a removable grille. The grille was part of the front panel. The panel shape was the same as those with a hole cut for the grille, so the integral grille section could be cut out and a removable grille installed, even on the Moke.

There were seven different basic variations of the Mk I grille: Morris (painted or chromed), Austin, Austin Super, Morris Super, Austin Cooper and S, Morris Cooper and S. All were fitted with a chrome piece over the top and down the sides (the “mustache”) and two finishing pieces (“whiskers”), one sticking out from each side of the lower ends of the mustache. The whiskers could be left off, leaving a slightly unfinished look, or the whiskers and mustache could be left off and just the grille used for a different look.

All of these grilles were fitted with no tie-ins to the bonnet, and fit into the recess in the front panel. The bonnet did not have a front support lip like the later cars. A later, “lipped” bonnet could be used with Mk I grilles, but the lip should be removed.

Starting with the introduction of the Mk II cars in October of 1967, the grille for the saloons went through a major change and would keep the same basic shape for the rest of production. Grille colors and details varied (many of which are no longer available), but, with one exception, the grilles were all interchangeable. The exception came about late in life when the bonnet release was moved inside the car like it had been decades earlier on the Elf and Hornet. With that change, the hole, center top of the grille that had been used for access to the bonnet release lever, was no longer necessary and not built into the grilles.

The Mk II grilles used a different trim system. The bonnet was produced with a lip on the leading edge and the upper grille trim piece fit to this lip. The two side trim pieces were C-shaped and capped each end of the grille. The grille itself had a lower trim piece completing the surround look, and the grille attached to the front-most part of the body panel instead of into the recess.

King Bearings
Founded in 1960, King Engine Bearings is a world-class developer and manufacturer of engine bearings for automobiles, light to heavy-duty trucks, marine, aviation, standby power and other types of internal combustion engines. King’s only product is engine bearings. As a result of its specialization and focus, the company is recognized for producing the highest quality engine bearings available in the market today.

2018 Holiday Gift Guide
The holiday season is right around the corner. Have you made your list? Your list of gifts for the special people in your life AND the list of gifts you would enjoy getting wrapped under your Christmas tree. Just in case, here are some gift options that'll put a smile on any enthusiast's face (including yours).

Have a Question or Comment of your own? Click here!
Question:
I have a 1995 Mini and I want to replace the grill. I have a sports model, so I'm wondering what grills are available to me?
Answer:
Thanks for checking with us. The Mini as produced from 1959 thru 1967 used the same size grille with slightly different cosmetics and the same is true for all Minis produced from 1968 (MKII) thru the end of production in 2000. The same shape grille results in lots of options available.
This is a typical grille as first used in the MKII:  https://www.minimania.com/part/ALA6654-MS/Classic-Mini-Grille-1968-And-Later-Mk11-Mk111-Mk1v-And-Mkv
Note the sides of the grille come to a point on either side about halfway down the side.  ANY grille with this shape will fit your car. Thus your choice is dependent on what 'look' you want. A complete list of grilles can be found here:
https://www.minimania.com/ss/BODY,BUMPERS,BU_GRILLES
Remember that all grilles whether identified as MK2 or MK3, etc. are the same for all models thus 2000 (MKVII)
https://www.minimania.com/16_Mini_Mania_Catalog_GRILLS_59