Having determined what sort of material best suits your needs/application, the main design and detail features of the piston now need consideration. The over-riding factor that influences just what is best for an A-Series engine is the block's propensity for flex at higher rpm, and the crank's equal propensity for flex at the same sort of rpm levels. Both combine to require a piston that is as stable as possible to maintain effective and consistent ring-seal performance. Reduced ring seal equals dramatically reduced performance. And none of this is at all helped by the relatively enormous distance from the wrist pin centre to crown height on most A-series pistons.

Overall shape
For the longest time, pistons were made round (well, 'ish' anyway) and straight sided (again - 'ish' is applicable here too) to form a cylinder, the top closed in to retain the all-important fuel/mixture charge; mainly because this was the simplest shape that would fill/block off the cylinder (bore) in an engine to greatest effect for minimum outlay. The irrepressible march forward of technology soon came into play though, finding gains to be made in certain applications if the piston was made a slightly different shape, and weight savings allowed higher rpm to be achieved reliably. And with it came more bhp. It didn't take long for the step to more efficient position shapes to be used for maximising performance and economy in road engines either.

Just for the record - the 'ish' business described above refers to the fact that pistons are rarely either straight (parallel) sided, nor round. They are machined like this to compensate for the massive running temperature differences between the crown and skirt, and pin axis to open skirt area - the pistons crown being the smaller end of a tapered shape.

Perhaps the 'peak' of piston design is the current race-type items as used by the likes of F1, etc. - what amounts to little more than a large disc joined to the con rod by a short 'tail', having only two piston rings (one compression one oil ring) and weighing only slightly more than yer average feather. You have to see/feel one to appreciate the design - based on what has become commonly called a 'slipper' piston. Not because it looks like your fireside 'comfies', but because of it's low-drag design having no sides to speak of making if very 'slippery' in use. A feature carried over into the road-car market and after-market performance pistons. The Mini/A-series being no exception.

The first pistons available in this 'T' shape were manufactured for Abingdon ST for Mini Miglia/998cc engines. A pukka forged slipper piston made by Cosworth. You had to use S rods with these though as no sides precluded circlip or button retention for the wrist pin. The main hassle here was having to assemble the piston to the rod, remove the rings, feed the piston in from the bottom of the bore, then poke the piston out the top of the bore, and re-assemble the rings before making fast with the ring clamp to actually finally fit the assembly complete back into the bore. Strip down was the exact opposite. A fair bit of hassle.

Latter days saw the introduction of the slipper shape to the A+ engines, first fitted to the Metro, in an attempt to reduce piston drag/weight to maximise performance and economy for the road engines. It wasn't long before folk started using them in performance street and competition engines - believing what's good for the likes of F1 must be good for the A-series. Much in the way many other performance-related items have been applied from one automotive application to another entirely different one without any real understanding of the subject, consideration or testing/development work.

To cut this long story short - remember what I said right at the start about bore and crank flexure? F1 engines have supremely stiff block assemblies with very short-stroke, supremely stiff crankshafts. They simply do not suffer from flexure to a degree that affects ring seal at high rpm (and we-re talking 18,000rpm here). Even when considering the fact the engine and gearbox assembly is what they call a 'stressed member' - it carries the whole of the rear suspension as well. The A-series doesn't enjoy anything like this stiffness.

I am not saying the current crop of slipper pistons are a waste of time in an A-series. They are perfectly capable when used in a situation they were designed for. And I have used them (the MG Metro versions - the best of the bunch construction-wise) in race engines with success. It's just not the best option for our venerable A-series. This was recognised by Rover when they went into production of the Metro Turbo engines, and latterly the injection Mini engines where full-skirt pistons were used.

So - where an option exists a full-skirt piston is likely to produce more effective and more consistent ring seal, especially at higher rpm than a slipper type because of the crank/bore flexure problem. And this is anything over 6,500rpm on a regular and protracted basis, i.e. not just a quick 'visit' to that rpm peak on an odd occasion.

Rings and ring lands
There are a couple of items to note here - ring pack position and oil drain facility.

Most modern pistons have the ring packs and position on the piston pretty much sorted out. It is worth knowing that the ideal distance from the top ring to the piston crown on an A-series engine is around 7mm. Higher than this and damage from combustion is likely, lower and detonation can be caused by excessive amounts of un-burnt fuel collecting here ignited by incorrect ignition timing. This was (and is) the Achilles Heal of the 73.5mm/74mm Powermax piston for 1380/1400cc engines. The top ring is too far down the piston. I'd like a pound for every time I've seen these pistons with detonation damage around and above the top ring.

Oil drainage from the oil ring land area should preferably be by drilled holes as these can be angled to best use and minimise weakening of the piston. This form of oil drainage is one of the 'must have' features for a high performance piston. Unfortunately this isn't practical on mass-produced 'standard' engine pistons. Standard production pistons tend to have slots machined along the back of the ring groove at 90 degrees to the wrist pin axis and is also seen as a way to make the piston run 'quieter' by damping out resonance in it. Perhaps the most extreme example of the slotting method of quietening pistons is seen on the very old 803cc/850cc specimens where a 'T' slot was machined into one side of the piston skirt. 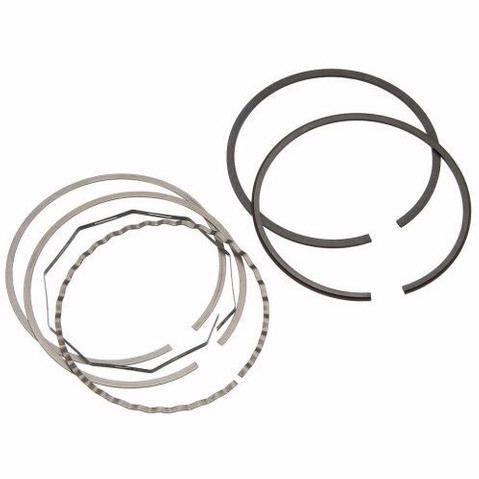 Whilst not ideal, slots certainly aren't a huge problem where high performance is planned - providing the slots are not excessively long. A slot that gets anywhere near, or even encroaching into, the pin boss supports/struts should be completely avoided for performance use. These are likely to severely weaken the pin boss, causing the piston top section to detach from the skirt at this point - two-piece pistons make a real mess of the rest of the engine!

Modern piston rings are generally now settled into a regime of high quality materials and production. Widths are distilled down into certain operating envelopes. Although 1mm width rings are used by some race piston manufacturers (seen as a way of reducing the phenomenal amount of friction/drag developed by the rings, some 70-75% of the total internal friction developed within an engine), 1.2mm rings are optimum for the A-series. Consequently this width appears on all well developed A-series performance pistons.

Wrist (Gudgeon) pin
Covered in 'Pistons - Why's and wherefores' all I'll add here is the most common type used in a majority of standard production pistons has a very thick wall with parallel-bored centre hole. Grossly over-engineered to easily cover 100,00miles without failure, simple and cheap to manufacture. But very heavy. Ideal solution is a much thinner-walled parallel-bored pin in superior material - light but expensive to manufacture. Best halfway house is a pin with tapered-bore ends. Enough said on that subject.

However - of worthy note is the oiling system used. Oil splash from the thrashing engine internals provides superficial lubrication, but on a high performance piston something more is definitely required. 'Old' technology usually saw lubrication provided from behind the oil ring land, fed down onto the top of the pin (12 o'clock position viewed side on and crown upper-most). However, intensive development by major piston manufacturers identified this as a problem area, since the piston was under load at this point for a considerable amount of time - some 70%-worth, therefore limiting oil feed/lubrication of the pin. A consequence was rapidly worn pin bores in the pistons - and in the case of our A-series motors even more piston instability. To solve this problem, it has been found that two slots along the bore length at the 10 and 2 o'clock positions are far superior since these areas are under more or less no load all the time.

Mini Spares 'mega' piston range
Desperately inconsistent supplies for protracted periods of performance Mini pistons and the relatively 'ancient -' although it has to be said, 'pretty capable' - piston over-all design caused Mini Spares Centre to concentrate a fair amount of effort into developing the ‘MEGA’ piston range to try and resolve all these problems in one fell swoop.

Recruiting the AE Hepolite Group for their unquestionable and renowned design and manufacturing expertise, the goal was to produce the most robust piston possible given reasonable cost and weight limits. Applying current technological advances incorporating their very latest hi-spec AE109TF lightweight alloy and special double heat treatments, the result is an extremely durable piston that will withstand greater cylinder pressures at higher rpm than any other currently available.

To simplify the range, material has been concentrated around previous problem areas – the ring lands and crown – providing one crown height. This ensures sufficient material in critical areas to allow machining where long stroke cranks or longer con rods are used. The design guards against premature damage from poor/low quality modern fuels, the rings re-sited to minimise detonation damage in high compression engines. The ring dimensions are compatible, and therefore interchangeable, with the Omega Mini piston range. Full-circle skirts are used for maximum piston and ring stability. They also feature a specifically designed ridged finish to retain oil to protect against scuffing and galling at start up and cold running. A tapered pin is employed to maximise stiffness against lightest weight. In all - utilising all that technology and development has identified as necessary in a performance piston for the A-series engine.

The only downside to this is the fact that they are only available for the large-bore engine types. Insufficient demand and stupendous manufacturing investment costs have precluded manufacture of a range for the small-bore units.

For a list of pistons available, see the inventory section under pistons.