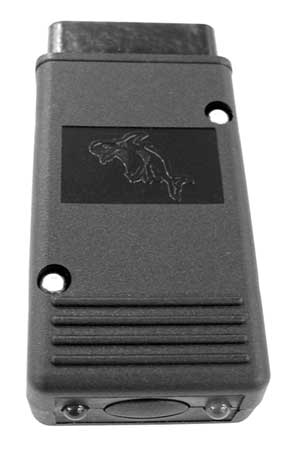 What's the USB port for?
The USB port allows you to connect your Shark Injector to a web server for updates or upgrades. This allows the Shark Injector to be compatible with future BMW software releases. The user will have the ability to download updates directly from the Update Web Server.

This will allow you to move from one performance stage to another without having to buy a new Shark Injector each time.

What octane must be used?
The minimum octane rating for the Injector is 91. However, on certain models the Shark Injector is offered in a "high octane" setting of 93. It is recommended that you purchase the version that you will use now and possibly in the future. Many states are abandoning 93 octane in favor of 91.

Do I really need a battery charger?
Yes! The installation of the Shark Injector requires power from the battery. It needs more power than the
battery can provide without the alternator generating a charge (and it's obviously not possible to have the
engine running). This is why a battery charger is necessary. Can you install the Shark Injector without the
charger? No. The Injector checks for voltage several times during its programming. If at any time it detects
voltage levels are too low it will give you an Error Code (123 or 124).

Does the Shark Injector void my warranty?
No. Federal law prohibits a manufacturer from voiding a warranty simply because aftermarket parts are
present. The installed aftermarket part has to be the cause of a failure on the warranty part (the Magnuson·
Moss Warranty & Federal Trade Commission Improvement Act). Oftentimes, it's not BMW themselves lhat say
a warranty is voided, but rather an uninformed or stubborn dealer that is unwIlling to support the owner.
According to BMW's own literature on the SUbject, "the BMW warranty on a component is void due to a
modification where the modification, alteration or instaJlation of an aftermarket part was directly responsible for
the failure" [emphasis added). In other words, the aftermarket part has to be the direct cause of a failure; its
presence alone is not grounds for voiding the warranty.

Is the Shark Injector tuned for a CAl and exhaust?
There are different Shark Injector files for different modifications. Generally speaking, the Shark Injector is
compatible with a standard Cold Air Intake such as the one designed by Jim Conforti (also the engineer of the
Shark Injector). Upgrades such as sport cams, headers, larger air flow meters will work better with a special
software file. With the USB connection, you can purchase these upgraded files from Shark Injector dealers and
re·load your Injector.

Does the software "go away" over time and will the Shark need to be re-installed?
No. BMW software is adaptive to your driving habits but, no, the Shark Injector software never disappears from
the computer.

Can the Shark Injector damage my ECU?
No. The procedure that the Shark Injector follows is really no different than the one BMW uses to update your
car. As long as you follow and understand the instructions the procedure is painless and transparent. In the
end, this is software that is being loaded into the car; the hardware remains the same.

Will my car ping with the Shark Injector?
No. Pinging/detonation/knocking can occur with or without the Shark Injector installed. The greater cause of
this issue is the quality of the fuel available to you. The vast majority of customers with the Shark Injector and
Conforti Cold Air Intake do not experience pinging problems. However, there have been instances with other
aftermarket products which have led to pinging when used with this poor quality fuel. Your car is equipped with
knock sensors, however, so the risk of permanent damage to the engine is kept very low.

How do I know if my car has been Sharked?
At the end of the procedure, one or both of the LED's will illuminate. For an UPGRADE, the green LED will
shine. For a RESTORE, the green and the red LED's will be on. Without the Injector, the only way to tell, other
than the increase in power. is by probing the new rev limit. On most BMWs this is raised to 7000 rpm. On cars
equipped with automatic transmissions it will difficult or impossible to reach this point without performance
software for the transmission. For added confirmation you can always repeat the UPGRADE process,

How do I un-install the Injector?
Follow the same procedure as you did for installation. When doing a Restore function you will see both the
green and red LEO lights light up at the end.

Do I ever need to get the Shark Injector updated?
No. Generally speaking, BMW's engines are so finely tuned from the factory that further updates are not
usually necessary. Jim Conforti has spent many years tweaking BMW's software to the point that the engine is
at its peak efficiency when the Shark Injector is installed. As a general rule, updates to the Injector are not
necessary.

What do I do when I have to take the car to the dealer?
If your car needs to visit the dealer for a new upload of BMW software you should perform a Restore function
with the Shark Injector. This will allow the BMW dealer to upgrade your software without over·writing the Shark
Injector's performance software. New software is not always strictly necessary and you can always refuse
when the dealer wants to install new software.

What should I do when my Check Engine light or Service Engine light comes on?
A) You can bring your car to a BMW service facility and have them read the trouble codes from the car's
computer. Or B) you can purchase the Peake Fault Code Reader from any number of aftermarket retailers and
save yourself a trip to the BMW dealer. This will tell you exactly what is wrong with the car; however, it will not
be caused by the Shark Injector.

Is it legal in California?
These products are not CARB-certified or legal for sale or use in the state of California on any pollution controlled
motor vehicles.

For US-spec cars in a foreign country (people in the military, business overseas, etc) it is recommended NOT
to have the local BMW dealer perform any software updates on your car. This can lead to the Shark Injector
not re-installing after the BMW update. BMW may have different versions of their software in a foreign country
than in the U.S. and Canada. And these foreign versions of the software are not available to Jim Conforti.

ECU Upgrades for MINI Cooper F54-F60
F-SERIES ECU Upgrades will make your MINI even more fun to drive (yes, it's possible). Take your MINI's performance to the next level of awesomeness. ECU upgrades become more critical as you add more 'serious' engine upgrades such as Turbos or internal upgrades, but are also effective on a stock Mini.

Have a Question or Comment of your own? Click here!
Question:
I have a ‘05 Cooper S with several external engine mods & your 93 octane shark software installed. Recently getting a variable, sometimes rough idle & service engine light which codes to cyl 1 misfire. I’ve replaced all ignition parts, compression is good on all 4 & had the #1 injector replaced. Still the same issue. I’ve moved 3 times since I bought the car and so far and having trouble finding the shark box (sigh) in order to see the problem clears with the factory software program. While I continue my hunt, my shop would like to know if there is any chance that your software could affect telling their advanced OBD WHICH cylinder is a problem & just flashing cylinder 1?
Answer:
The shark injector software does not touch the fault code / diagnostic system of the factory software.