Wolseley Across America 13: STILL MORE VIRGINIA & BACK INTO NORTH CAROLINA


Sunday the 20th promised to be a great day. That is the day I started

down the Blue Ridge Parkway. Up until a couple of months ago, I'd never heard

of it. It's certainly no secret to anyone who lives within 500 miles of it,

And I have a confession to make right here in public. Having grown up

between the Olympics and the Cascades and having traveled in the Rockies,

I've always thought of the little mountain chain back east as interesting,

but really nothing more than foothills. Not real mountains at all. After all,

the tallest mountain east of the Mississippi is only a little over 6,000 feet

high. Why, shucks, ma'am, I've driven over passes in the Rockies way higher

Well, the next two days didn't exactly change my mind about the size of

these "foothills," but it certainly opened my eyes to a different kind of

stunning, mountain beauty. I can't say this is the best drive in the world,

but if you ever get the chance to drive through this majestic area, do so

without hesitation -- except probably in winter.

ending near Waynesboro and the start of the Blue Ridge. It is a recommended,

scenic drive, but I didn't take the extra time to go that far north for the

start. If it is anything like the Blue Ridge, take the time!

Great Smoky Mountains). It was also part of the plan for recovery from the

depression by being a way to put some of the unemployed to work. Since it was

a government project, it wasn't completely finished until 1987; although, to

be a bit more fair, many parts of it were done and used earlier and almost 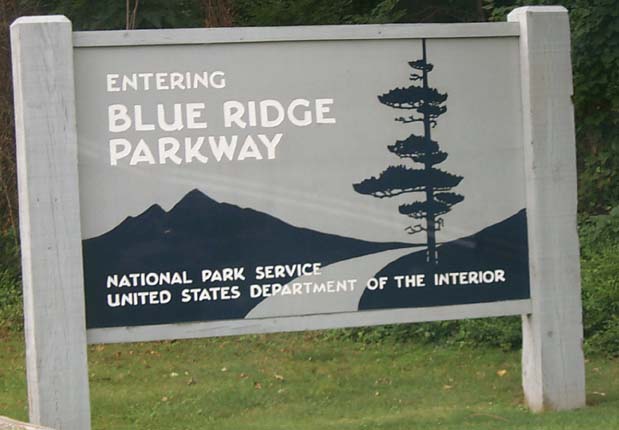 A welcome to 469 miles of wonderful driving and great scenery. Rockfish Gap at 1,900
feet.

The section between Rockfish Gap and Roanoke I think is my favorite;

although, choosing any one section over any other is really just choosing

between various levels of "great." This first section didn't get as high as

later bits, but still provided spectacular scenery and mile after mile of

winding, well-paved roads. The climbs were also more gradual and I don't

remember any third gear sections like would show up further on down the road.

paradise. There were many out obviously enjoying the ride. (Many is a

relative term. The road was never crowded during my entire drive.) Also, very

containing two grinning people. The road is that good! I made a stop at one

of the exhibits along the way (Humpback Rocks Pioneer Exhibit). Shortly after

as before. Obviously, the road and the car and the mood matched well enough

that section again. (This time the other person was driving.) The Blue Ridge

will do that to you!

Let me explain the road. If you really wanted to be stupid, you could

limit of 45mph and get in a groove. (Zen and the Art of the Blue Ridge?)

You'll find enough challenge to keep your concentration (especially on 3½"

rims!) and still be able to anticipate the stopping points to look out over

this incredible vista of mountains and valleys. Too fast and you'll miss half

of the reason for driving the Parkway - the scenery. Also, be mindful of

rocks on the road. I only encountered one, but it would have meant a busted

rocks on the road by signs stating, "Watch for Fallen Rocks." With all the

rocks could have been saved.)

to take in one incredible vista after another, I didn't attempt to take any

photographs. I don't think any would have done the area justice. And each

way through the labyrinth of valleys and settled in to call this home.

Besides the winding roads and the scenery, the other nice thing about the

Blue Ridge Parkway is the absence of towns. This place has been kept as clean

gas tank. Plan ahead! (You are provided with mileage markers along the road

to help remind you of your position in the park. They are helpful if you are

following a guidebook or the National Park Service's excellent map.)

Just before mileage marker 217 you cross into North Carolina. 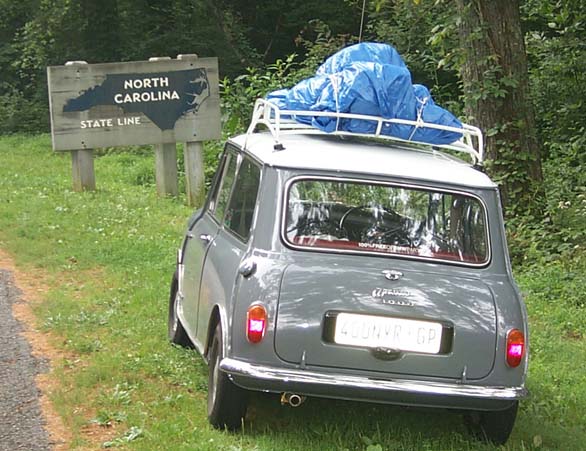 The second time into North Carolina.

to spend the night in Boone - yes, that Daniel Boone. It was near here at

Kentucky. First, I ran into a section of the Parkway that was closed and was

lead off onto a well-marked detour. It was well marked on the road but I had

no idea where I was going. I stopped long enough to fire up the laptop and

the GPS and followed comfortably along after that until I reached Boone. I

don't know what it was, but the map and the roads didn't want to coordinate

imply!) and couldn't find the right road to the hotel. I finally stopped and

spent some time looking at the maps and the GPS location. It was easy after

that. (I know. It might have been easier to stop and ask someone for

directions, but that would go against the Man's Road Rules Creed. Besides,

the GPS was more fun!)

EG and I had traveled 1,923 miles since leaving Miami.

Monday the 21st, I went back east on 421 to pick up the Parkway as far

Parkway. I didn't want to miss a mile that I didn't have to.

the Biltmore Estate and still get to meet up with another Mini owner. Since

the drive was short I planned a few other stops along the way.

The first stop was at the Linn Cove Viaduct Visitor Center. The Viaduct

was the last section of the Parkway to be built, is 1,243 feet long and is

one of the most complicated roads every constructed. It runs along the side

mountain at all. No tunnels blasted or work roads built. Stop at the Visitor

Center. The explanations there are better than I can do.

316. A couple of short hikes wander through the trees to get to different

views of nice falls. I dragged the hiking shoes I've been lugging around for

various paths to see the falls. Nice walk. OK falls. Worth the time for the

combination, but don't expect to be "wowed" by the falls.

way and spectacular views out over the many valleys. I tried a photo but I'm

afraid it doesn't do the scenery justice. 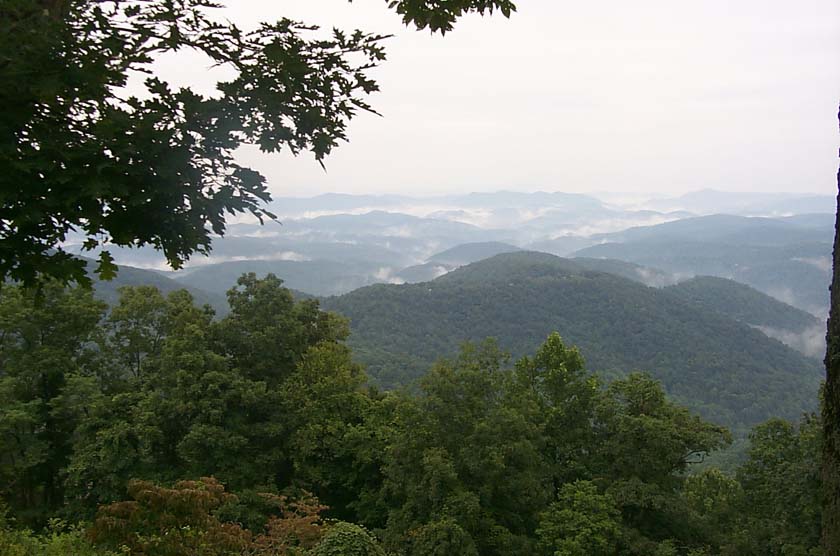 Many valleys with mist and fog in all of
them.

The last stop promised to be the best of the day on the Parkway and was,

sort of. The road into Mount Mitchell State Park takes off the Parkway at

the Mississippi. As I climbed the road toward it the mist settled in and it

was slow going. It cleared just a little as I rounded a corner near the

Ranger Station where some roadwork was going on. I stopped while a backhoe

blocked the path and I waited patiently. One of the Rangers finally came over

down for an hour or more. Because I was hungry I suggested I had better skip

the drive but I was informed there was a restaurant near the top. OK. Stop

for lunch and see the sights. I'd chance it. They moved the backhoe and let

me through, the last car to go up the road for at least an hour. What they

wanted to see if EG and her 10" rims could get through. No trouble, but I was

working hard to make sure I didn't get stopped. Once stopped I would have had

around watching the toy car.

After stopping for lunch at an all but deserted restaurant, I continued

on up the road to the parking lot near the peak of the mountain. 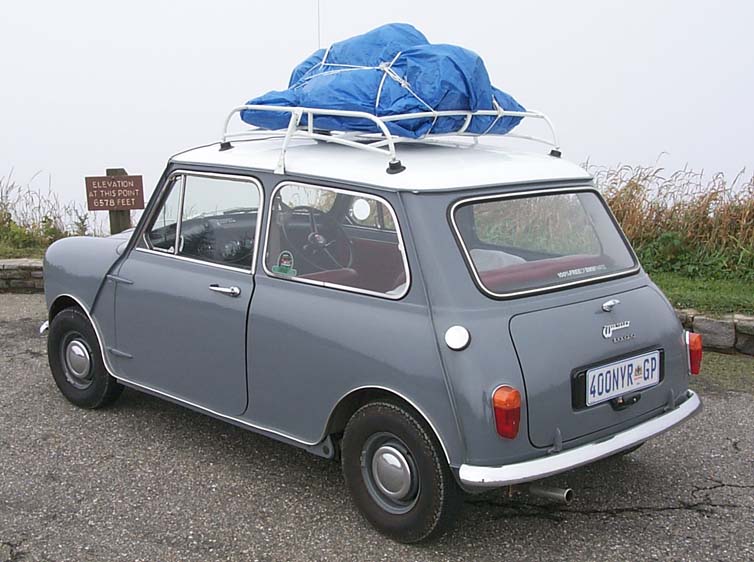 You may not be able to make out the

elevation sign reading 6,578 feet. Also, from this side you can't see EG

panting a bit. The third thing you might not notice is the absence of any

scenery past EG. Those are clouds and more clouds. For viability one could

From the parking lot one can take a short hike, more like a short walk,

really, to the base of a tower at the peak of the mountain. I moved EG into

this photo to show you the small distance to go. How many of the highest

take a short walk the rest of the way. Maybe, none. 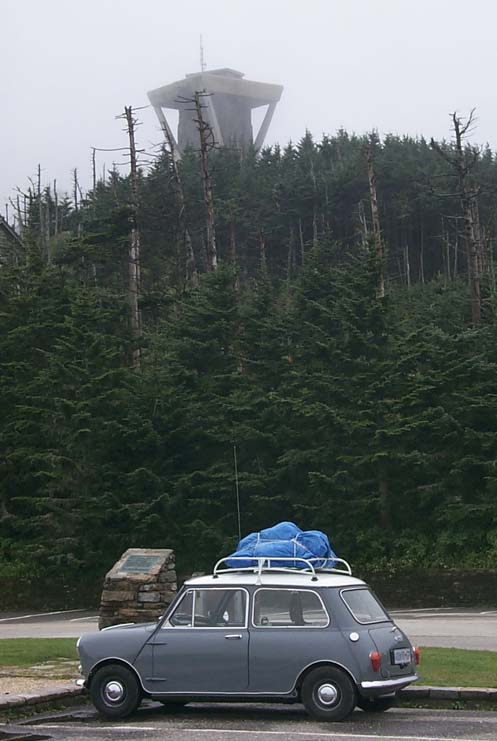 The short climb left from the parking lot to the base of the
tower. 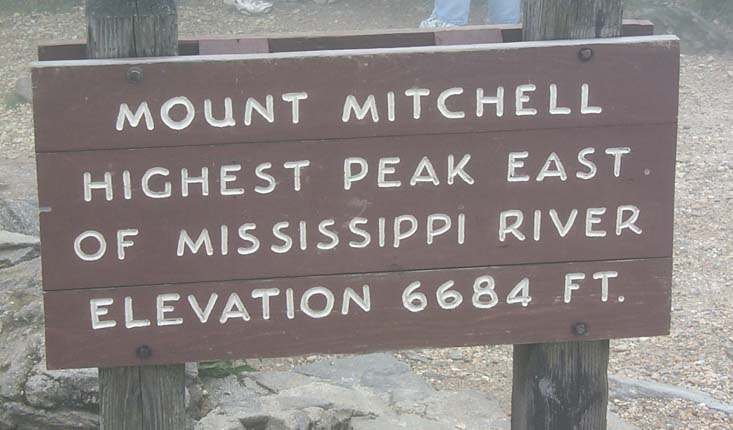 The elevation sign at the base of the tower.

wonderful sights I was not seeing because of the clouds. I even took a photo,

but it isn't worth wasting the space to show it!

way up. I was wondering whether the ditch project had been finished. Would I

be trapped in the clouds forever? The clouds had really moved in and I was

before I realized what had happened. Even 15 mph was too fast to be driving.

the fuel gauge, I noticed that getting to the next fuel stop in Asheville

might be a bit tricky. I hadn't figured in the slow trip up and down the

when visibility allowed it. Also, the driving continued to be up and down

more steep grades like it had been most of the day. There were several where

I had to drop down into third gear.

As I was descending I was watching the fuel gauge sink into the E-zone.

Mind you, I wasn't in big trouble because I was carrying a 2-gallon gas

container in the boot, but I'd rather not run the tank dry. That was about

wasn't my turn to go. So I sat for a while, impatiently waiting. Finally, off

I went continuing downhill towards Asheville. No problem. I should have as

much as two or three drops left by the time I get there. Ahead I could see

the junction for the turn to Asheville. It should be just around the corner.

Wait for the next exciting chapter. Will Chuck make it to a gas station?

Why all the movie trucks at the Biltmore Estate? Who's Neal Weinmann? What do

Henry Ford and at least eight presidents have in common?