The John Unsbee Mini Cooper S race car came to us in October of 2009 “almost ready to race”!  Well, almost- the ‘freshly’ rebuilt motor was in the car with no carbs, cooling system, etc.

While the story of the complete car has been told before, I thought I would share the story behind the motor.  As John told the story, the previous last motor put into the Mini Cooper was also a new build but it seems as though someone did something wrong and the crankshaft/ block, etc. went away after only a few laps (this all happened in the ‘70’s).  With every intention of keeping the car ‘ready to race’ again, yet another new motor was built.  This is the one in the car as we got it.  It had been built but never run.  We were told that it was built by a very experienced performance engine builder of the day.  We heard nothing but positive things and thus were willing to run ‘as is’!  Except!  We were told that John could not afford a Limited Slip Differential and thus it was a favorite of the time; Welded Differential!

Being the old guy that I am it was a foregone conclusion that I would never be able to handle a front wheel drive, power understeering Mini Cooper.  As everything was not really hooked up, almost the first thing we did was to pull the engine.

The next step was to pull the transmission to install a Limited Slip differential.  Then it struck us that the Monty Mini and many modern Vintage Race Minis are running rod change transmissions.  The gearbox in John’s car is a proper remote style with classic 4 sync close ratio straight cut gears.  But, if we are to invest in a new Limited Slip, should we go with one for a Remote or Rod change type.  Seemed like a hard call but we finally decided that we would go with rod change. While it required new axles, inboard CV joints and side covers, it still seemed the best choice. We kept the remote box and shifter and simply installed the Rod Change diff and side covers.

Just as a reminder to those of you that have not done this before, in order to fit a LSD diff into a remote style gearbox, a fair amount of grinding will be required to make it fit. 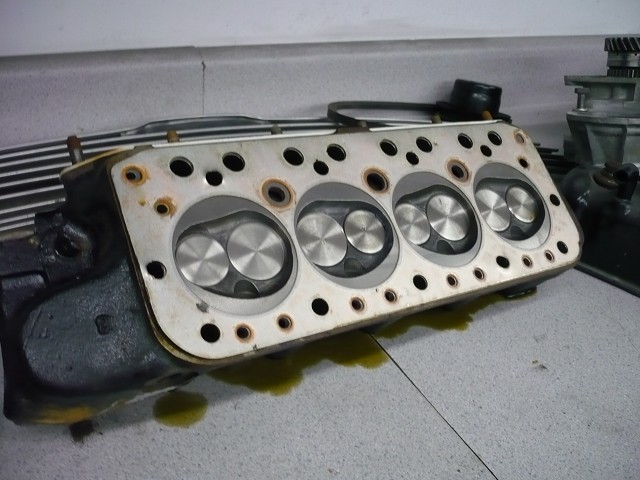 And while the power unit was on the engine stand it seemed silly to not at least pull the cylinder head for a general review of what was inside. Just as John had said, this was indeed a very fresh engine.  Pistons were new (+.040”), cylinder head was new, everything was as described.  The head is a 12G940 casting with big valves (1.4” intakes and 1.21 exhausts) and mild porting work.  Not the most over the top head I have seen but very much a respectable budget race head.  Pulled a couple of the bottom end bea

ring and again all were new.  After a new TAM1521 head gasket it was reassembled.

John had told us that some years earlier he had sold the Weber for the car but was instead provided a pair of modified twin HS4 carbs.  Having had a good bit of experience with these, they had to be my first choice.  So after all the re-installation back into the car with all the ensuring unforeseen issues it was time to fire it up.  Spark was our first issue.  The home made wiring harness had been pulled back for the quick refresh paint job in the ‘70’s and thus we simply did not get that right the first time.

Fuel was our next problem.  Stock original twin gas tanks feed a pair of fuel pumps in parallel with separate power switches.  After another wiring issue and replacing one of the pumps we got them to work.  I then put a little gas in both tanks and proceeded to pump gas to the front of the car to simply fill a jar to check for debris.  Everything looked great for the first few seconds, then it was clear that the several of the rubber fuel lines were leaking big time.  So while I was replacing the fuel lines Dennis decided that the SU’s were just not up to the job and as he had an old 40 Weber complete with manifold, all jetted etc. he switched the SU’s out in favor of the Weber.  So that process blew an entire evening and it set for a fresh start in the morning.

After a good night rest we looked at the entire system again and this time decided that the both fuel tanks had to come out and be cleaned.  One of the lines out of the tank was almost solid as it dissolved from the inside. Another half day and finally it was time to try it again.  This time it was magic, everything seemed perfect and it was off to the races!

Friday night unloading the Mini Cooper it fired right up and all was great. Saturday morning technical inspection was just as easy with no signs of any issues.  The first time on the track was exciting to say the least.  Forgetting all the handling issues, the engine seemed to pull reasonable well up to about 6,200 RPM where it simply missed and would not pull further. This was not too bad as we picked a final drive ratio that was not bad for this long legged track.  (We will see if we pay the price when we get to Sears Point).  So Saturday afternoon the Mini was very consistent; it ran fine but simply would not pull past about 6,200.  By Saturday evening we had decided the Monty was not going to run again and thus we pulled the distributor out of it to attempt to fix the top end performance problem. Remember we had no way to know what to expect from this engine, no idea what camshaft was in it, no idea of the compression, no idea how close the jetting would be, etc. etc. All in all, it ran great; why not change the distributor to see if it helped.

So Sunday morning brought new hope, we had tweaked on the suspension set up and just as important the transplanted distributor made a huge difference when setting the ignition timing.  With the original distributor the timing light seemed to scatter a good 15 to 20 degrees, it was almost impossible to set the total advance.  With the new/old distributor from the Monty, the spark timing almost seemed painted in place.  We thought this surly would make a difference.

The first run proved us right- it would now hit 7K at the end of the front straight and even pulled stronger out of all the corners, it was great on Saturday and even better on Sunday. So the after the thrill of the first successful week-end of this very special vintage race Mini Cooper we analyzed that the next step was a little more HP, the cheap and dirty approach.  We decided that the engine was not near the full race Monty Mini but would be great and easy ready to make the first race of 2010.  We would simply pull the cylinder head again and shave it by .020.  Surely the camshaft could drive a little more compression!

We had planned to pull the car completely apart again anyway to have it painted and freshen the rest of the Mini, so the engine would be out of the car anyway and to simply shave the ‘fresh’ head would be an easy upgrade.   The head came off the engine easy enough but we were quick to notice that the head gasket was almost completely blown out around the number 2 exhaust port. It looked very strange and I have to admit that as we had installed a new gasket the week before it must be a matter of debris under the gasket.  Then we noticed a strange very small spring like material in sitting on the head next to a couple of the valve springs!  Pulling the valve springs proved our fears, these little springs were actually part of the valve stem seals before the top spring retainer crushed them. It turns out that the engine builder in an attempt to get the maximum flow from his work had simply not pushed the guides into the head are enough.  Seemed like another simple fix. The long story short is that I took it to a local machine shop to have it shaved per the original plan of .020” and ‘oh by the way’ clean it and push the guides in a little further.

The shop foreman asked if he should crack test it as it was planned to be cleaned anyway. My answer was ‘not needed’ as it was a ‘fresh’ head with only barely one week-end of racing. A day later I got the call from the machine shop that they had discovered a crack between the #2 exhaust seat and the spark plug hole!!  Crap, I guess I had to ignore the fact that I had not asked for it to be crack tested and just be thankful that we found it before it went further.

MY RECOLLECTIONS OF 1971 RACING THE MINI COOPER
John Unsbee raced a Classic Mini Cooper for a number of years and this is part of his story.
Article Date: Dec 23, 2009