Do I need to do a Valve Job on My Classic Mini?

BMC A-Series Valve train - Setting valve clearances (lash)
Created: September 30, 2004
A question that has cropped up frequently on the message board lately, and one that I do not ever recall having been set down in print in any magazines, is that of how to decide what the valve clearances should be when changing from the standard rocker gear to higher-lift options. So I thought I wo...

Austin MIni CYLINDER HEAD - Valves; shapes, materials,& finishes.
Created: October 19, 2000
Many moons ago, the standard performance valve shape was the then-ubiquitous 'penny-on-a-stick' profile. For the very good and simple reason it minimised airflow obstruction by having the least amount of material in the way. Very plausible, and a design that many have stayed with to this day

Do I need to do a Valve Job?

Most engines will go at least 80,000 miles before "needing a valve job"!   But what are the signs? How do I determine if I really need it?  Do I do it myself or pay a local machine shop?

The Condition Of Your Cylinder Head Will Tell The Story

The condition of the cylinder head valves and seats can have a big impact on the performance of the vehicle.  The valves take a lot of abuse even if you are not into seeing how many times you can hit the red-line on the tachometer.  As mileage increases, the valve performance is degraded by heat and sheer use.  The results can mean lower compression and oil consumption. A "burnt valve" can often result when an owner or mechanic simply fails to feel the gradual loss of performance.

Once you have recognized that need for a valve job and removed the cylinder head, a quick visual inspection can greatly increase your understanding of the results of all the daily abuse the valves take.  The valves are operating to get the air / gas mixture into the combustion chamber and the exhaust out of it.  On the intake side, the valves control a relatively cool mixture of air and fuel into the combustion chamber. It then tries to seal the opening so that the resulting combustion is directed to driving the piston down the bore.

On the exhaust side, the valve is not only required to maintain a very tight seal during the combustion stroke but must also subsequently pass all the resulting super-heated gas out to the exhaust manifold.  The exhaust gases contain impurities and are so hot they melt and almost become part of the metal of the valves.  The valve face edge is the critical part of the valve that must maintain a perfect seal around the port to attain the compression needed for performance.  These impurities are often caught in the seat area and get compressed as the valve attempts to maintain the needed seal.  A visual inspection of this seat area will typically reveal light and dark spots where the various impurities were caught.  The resulting lack of a perfect seal will in itself also result in further degradation of the seal area as hot gases are allowed to squeeze by the fractional opening with more impurities and more degradation. 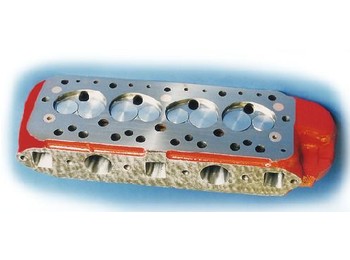 Cleaning the valves is often an option.  A number of methods can be used but our preference is to start by using a wire wheel and then finishing off by putting them into a lathe for final cleaning and polishing. Since the head is off the motor for performance issues the next critical step is checking the valve seats.

A visual inspection of this area will reveal anything from small discolored spots, small dents in the surface or completed edges that have been burnt away.  Small discolored spots can be fixed with an easy to use lapping compound. Valves with small dents or imprints can be cured by have the valve edge cut and the mating surface in the cylinder head also surfaced.  If the pitting is anywhere close to severe the only real solution is to replace the valves.

Replacing valve stem seals during a 'valve job' is an automatic must do and often times new valves guides need to be pressed into the cylinder head and then reamed to size.  The final factor in controlling the oil is the wear that occurs on the valve stem itself.  A worn stem that is severely worn can typically be seen by the naked eye but a digital caliper is the best method.

Clearly a worn stem can only be resolved by valve replacement.

Have a Question or Comment of your own? Click here!
Question:
Do you have any trouble with the head's brass plug on the HG's fire-ring?
Answer:
If the cylinder head had been overheated it is not uncommon for the brass plugs to get loose. The solution is to simply have new ones made at your local machine shop.