I’m sure we’re all aware of Sir Alec Issigonis’ brilliant solution to the gearbox location in the Mini - just fold it up underneath the engine, simple. Following is a résumé of the production gearboxes to date.

The first Minis rolled off the production line with a three-syncro gearbox, first gear as explained earlier was still a hit and miss affair. The speed matching of the other gears in the gear train was undertaken by brass 'syncro cone' rings pressed on to the gears. These didn’t wear particularly well, further development seeing the introduction of the independent balk ring as used today in 1962. This gear set became known as the ‘A-type’ gear set, and was used up until September 1964 when it was replaced by the ‘B-type' gears. There were a few differences between the ‘A’ and ‘B’-type gears, the main ones were as follows - The ‘A’-type gears had a much more steeply inclined helical cut (helical - describes teeth cut at an angle across the gear) than ‘B’-type gears. 2nd and 3rd gears on the  ‘A’-type ran on bronze bushes where the ‘B’-type ran on individual needle rollers. The ‘A’-type mainshaft had a smaller nose to accept a fixed sleeve bearing where the ‘B’-type had a caged needle roller bearing. Essentially it wasn’t possible to mix and match these two types, although an exception was made for the early S which had a special laygear made to accept ‘B’-type first and reverse gears.

The end of 1968 saw the introduction of the all-syncro (4-syncro) gearbox - at last! - containing completely different internals and casing to accommodate the new and separate first gear, retaining the remote aluminium gear-change lever housing. This remained unchanged until 1973 when the remote housing was vetoed in favour of the rod-change system, substituting not only the external aluminium housing for two rods (hence the name), the internal selection system was much simplified too. Finally, around 1982 saw the introduction of the A+-type gears. These were used as they were supposedly quieter running, being identified by a groove mark around the centre peaks of the teeth, and having a noticeably sharper point to the tooth profile in place of the blunt tips of the earlier gears.

The key to getting the best performance out of your newly spruced up engine is selecting the best collection of ratios to suit the power output, and the general use to which your Mini will be put. What we’re talking about here is making acceleration more rapid, greater top speed, and more seamless acceleration. The last item refers to that all too familiar ‘dropping into a large hole’ feeling when shifting gears as your Min goes from screaming like a banshee in first gear to moaning like an old man as you shift into second, and even worse going third to top. This is caused by the basic selection of gear ratios, accentuated by the final drive (FD).

The only difficult bit in gearboxes is calculating the gear ratios, explaining it even more so. The relevant formulae can be seen in article 'Gearbox - Formulae for FD/tyre size/car speed and gear ratio calculation', but for now a loose description is that dividing the number of teeth of the driven gear by that of the driver, and applying the constant input ratio gives the actual ratio. The constant input ratio is determined by the input shaft and corresponding laygear gear. Suffice to say that the ratios are quoted as a comparison - i.e. first gear ratio in an A+ ‘box is 3.64 to 1. This means for 1 revolution of the laygear (driver, and hence one engine revolution where 1 to 1 drop gears are used) the mainshaft gear is turned 3.64 times through the constant input ratio. The bigger the number, the more revolutions the mainshaft gear is making. Bigger numbers define easier acceleration. That’s why trying to pull away from standstill in top (fourth) gear is nigh-on impossible as it’s 1 to 1- remember the laws of leverage! This made easier or more difficult by the FD ratio used.

The gear ratios have to be selected together to provide continued and beneficial forward motion of the vehicle. In a race-car that equates to ratios that are similar (close together) to be able to use the relatively narrow power-band of a high-revving engine at maximum speed. This means achieving the smallest drop in engine rpm at each gear-change, and consequently more gear-changes are needed. On the road, a much broader spread of flexible engine power allows more widely spaced ratios for a more acceptable overall performance from standstill, through town chugging and on to motorway cruising. The engine rpm drop between each gear-change can therefore be much greater as the engine is far more flexible. Again the FD used has a further sobering effect.

Rather than have the most desirable ratios for each engine/car type, manufacturers always ended up making compromises.  There are a number of reasons for this, the constantly over-bearing one being that of ‘economical manufacture’. Manufacturers aren’t going to produce a multitude of ratio choices for the same vehicle - far too costly - so they settle on a ‘one for all’ set up for a given model. And that’s the second biggest reason  - adaptability. However, all is not lost...

Essentially there’s been five ratio sets fitted to the standard production Minis over the years - two in 3-syncro form, the others 4-syncro. Take a look at the ratio chart for comparisons. The numbers themselves don’t make a great deal of sense, other than identifying the fact that some are closer together - inferring a smaller drop in engine rpm between gear changes. That’s why I’ve included the more notable (little known - therefore most often ignored) percentage of change - allowing far easier comparisons to be made.

To illustrate, many folk complain about the A+ ratios not being as good as the pre A+ ones, when in fact the only real difference is in the 1st to 2nd gear-change (3.64 and 3.52 respectively) - a 40% drop on the A+ one as opposed to 37%. Hence the exaggerated feeling of the engine dropping into a hole performance-wise. Made worse by a higher FD being used - 3.105 instead of 3.44 of the earlier Mini. Remember, bigger numbers mean better acceleration. The main two reasons for this are that the A+ ratios had to deal with everything from 998cc to 1275cc engines and the assortment of combinations of FD ratios and wheel sizes in both Minis and Metros! A higher first gear would have made standing starts difficult in the heavier Metro, especially with a 3.1 FD. The standardised A+ gear-set also has a different tooth profile - more rounded flanks and very pointed peaks. These are said to run quieter than their predecessors, but I’m not convinced.

To all intents and purposes then, the pre A+ 4-syncro ratios as used in all Minis from 1968 to 1980-ish is a better bet for a Mini. First gear allows a little more distance to be covered before second is selected, and drops the engine rpm less, so pulls a little better. Even better than this though is the 4-syncro S/1275GT ratio set as it also reduces the drop between third and top gears. The only down side is acceleration from standstill is slightly reduced due to the even higher first gear where the FD is unaltered. However - this is desirable where modified/bigger/more powerful engines are concerned as it improves initial grip (reducing wheel spin) and allows first gear to be hung on to even further. The closer ratios giving smaller engine rpm drops makes keeping the engine in its useful power band when driving ‘progressively’ much easier. So for a road going modified Mini - particularly when used in weekend competitions - the S/GT set is the one to have.

There is a problem though - availability. The S/GT gear set was relatively scarce in comparison to the standard set, consequently hard to find. Identification can only be made by having the gearbox off the engine. The first, second and third gears are identical to the standard Mini gearbox. However, the laygear is usually stamped 22G1040, but can be confirmed by counting the first motion gear (top gear/4th gear). This is the smallest gear on the clutch end of the mainshaft. It has 18 teeth compared to the 17 teeth of the standard one. As a bonus - and typical Leyland/Rover inconsistency - there were a very few A+ versions made that were fitted to a number of the last 1275GTs that had A+ engines. I’ve even had an MG Metro fitted with one!! 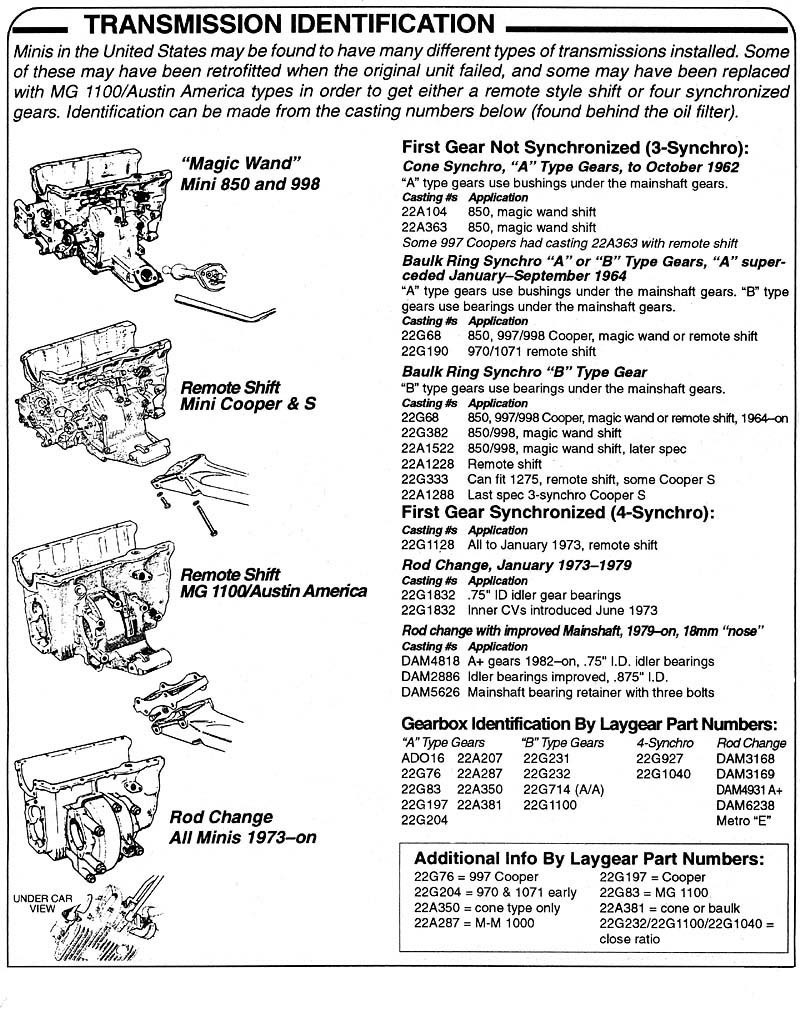 NOTE; A 'high' or 'low' ratio gear is in reference to it's performance, not it's numerical number. To illustrate - a 'high' FD ratio will give 'higher road speed', but will have a numerically low figure. A 'low' FD ratio will give lower road speed, but have a numerically high figure. A by-product of this will be reduced acceleration capability on the 'high' ratio, increased acceleration capability on the 'low' ratio. The main gearbox gears work in the exact same way.