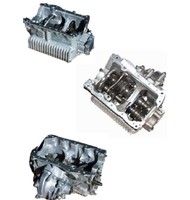 Have a Question or Comment of your own? Click here!
Rebuilt Mini Cooper 4 sync rod change gearbox with 3.1:1 final drive ratio.

How do I know which transmission my Classic Mini has?
Created: January 20, 2014
It’s really quite easy to tell which generation of gearbox, shift linkage, and axles your Mini has. Let’s say you want to order a replacement but terms like “remote”, “rod-change”, or “pot-joints” have you a little befuddled about just what the heck to order! Let’s very simply describe the three styles of transmissions and axles used in the production of the Classic Mini.
Read Complete Article

Classic Mini Rod Change Gearbox Rebuild - Mini Mania Video
Created: March 11, 2011
Classic Mini Gearbox Rebuild - Part 1 Gearboxes may seem complicated but they are very simple in their construction, and surprisingly easy to put together. The main issues are having the right tools to do the job.
Read Complete Article

Classic Mini Cooper Gearbox - Common sources of problems
Created: October 28, 2002
A gearbox needs careful and proper attention when building it up. It's the knowledge of what to look for prior to and during the build that sets the 'professional' builders apart.
Read Complete Article

ENGINE TRANSPLANTS - gearbox information
Created: November 01, 2000
Selecting the right final drive ration is a subject worthy of an entire book to explain the whys and wherefores, and also causes much consternation on the part of the transplanter. Much confusion’s spread over which gearbox has the best ratios, is best to use, and with which FD. For a detailed account on this and covering all gearboxes fitted as standard to the Mini, see the relevant separate articles 'Gearbox - Standard production gearbox types'.
Read Complete Article
Classic Austin Mini Cooper Final Drive ratio options
Created: October 26, 2000
The final drive gears are ultimately responsible for the way your Mini goes after engine, gearbox, and under carriage tweaking has been applied. The aforementioned and the degree to which it has been done will affect the decision as to what Final Drive is required. They’re also responsible for much discussion between many tuning freaks, and confusion to the less informed.
Read Complete Article

GEARBOX - How they work
Created: October 25, 2000
Having decided on or even implemented a course of action to bolster the performance of your Mini’s engine, maximising it’s potential should encompass a good look at the gearbox. It rarely does, as most folk take one look at those seemingly formidable teeth and decide it's not for them and stay well clear.
Read Complete Article