Installing the T7 Heater in our Mark I Cooper S

Installing a T7 Heater in a Mk I Cooper S

Get the Heater HERE

The heater was not among the pile of parts that were in the heap we started with on Cooper Road. As we’ve built this Mini, the heater was hardly a priority, but now that the car is presentable and being driven in the winter (and has no door windows yet!), I can see the practicality of having a heater. Our lovely assistant won’t ride in the car when it’s colder than 60. We’ve had a long cold spell!  We’ll start on a lovely sunny Saturday in early February. 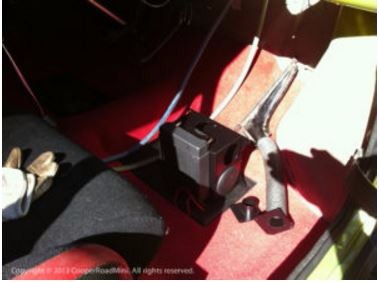 The Mk I heater has been unavailable for many years. When this elegant compact unit was brought to our attention at Mini Mania, we decided to get one for me to install in my own car and offer it as a viable alternative to grafting in a used Mk III assembly. A tiny unit requires less upheaval under the dash and provides options for installation. 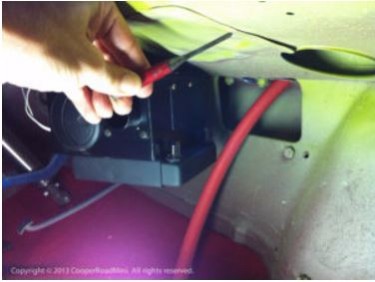 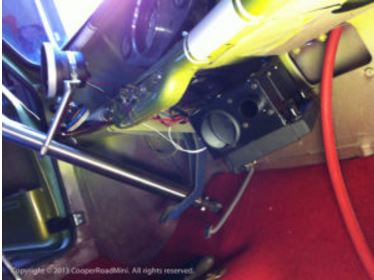 In my case I decided that mounting the T7 in the “proper” location looked like a pain. Not the heater’s fault, I didn’t want to crowd the wiring harness, and  liked the middle open under the dash. We have some ideas for a flexible iPad mount, and still have to sort out the steering column wiring, and I don’t want feet of heater hose under there.

The unit is so compact that I could place it up where the right hand drive pedal box assembly would mount, right where the heater hoses come through the firewall. At first, I thought to mount it with the fan and core vertical and just run two screws into the bulkhead “shelf” where the master cylinders would mount, thus no holes into the engine compartment.  It turned out that the hoses made an awkward bend, and the whole thing fit better under the dash with the core and fan horizontal, with the mounting plate just screwed  into the bottom of the dash. The hoses just reach straight down the height of the unit- about five inches from the holes in the top plate. Two holes were already in the dash tray, I just had to elongate with a file about an eighth of an inch, then drill two more and  I was ready to feed the hoses through. 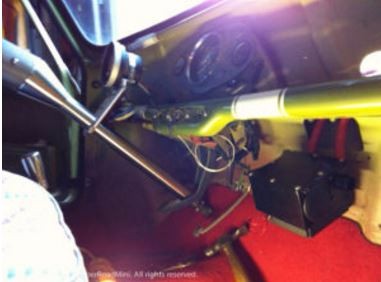 I slightly elongated the holes in the plate where the hoses fit through the bulkhead to allow the hoses to curve without kinking. I thought grommets should go there but my 1/2″ heater hose barely fit, so I just used a few sizes of deep sockets and a long extension to “soften” the sharp edges. The hoses have a relaxed curve and a good seal. 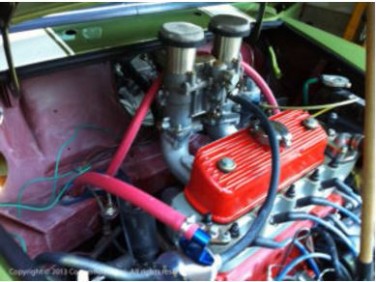 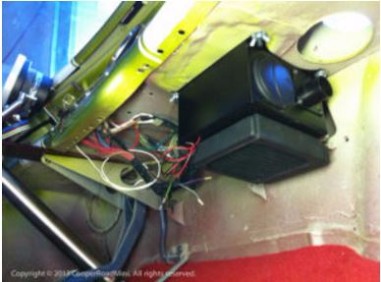 There is actually enough space to get at the hoses with the T7 mounted if you position the hose clamps favorably for access from the sides, but why contort in the foot-well of a Mini? Besides I wanted photos showing the hoses connected, and you can’t see them at all from the cabin with the unit installed like this. It’s so easy to remove that there should be no reason to drain it inside the car. Just undo the hoses from the engine and take the whole thing out.

By Sunday night I had all the nuts and bolts and hose clamps done, including re-routing my battery cables. This was a detail I had short-cut when assembling the car. They were strewn through the cabin exiting where the heater hoses had to go now! I’d driven the car up on front wheel ramps so I could get at the underside.  I got the positive cable nicely routed underneath, had a chance to inspect things, and it made kneeling next to the door or working under the dash a bit more comfortable. The last thing I did was turn the key to make sure the engine turned! 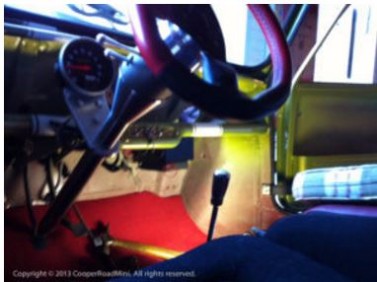 Once installed, it’s tucked up under the dash about as out of the way as you could hope. The fan has some power!

Monday morning the outdoor cars were frozen over. I thought it seemed like a good time to test the Mini’s new heater for leaks and such. Still no switch so no fan yet, but I could tell if it got hot! I’d worked on the thing most of the weekend and it owed me!  Starting the chokeless Weber in freezing weather is always hit-and-miss, even in a garage, but I got the right amount of fuel to light it and gas pedal twitch to keep it going for a few uncertain seconds. Remarkably, within about ten seconds it accepts a smooth idle of around 1000 RPM and just burbles happily, warming up. Mind you, it is a rather deep resonant burble so I roll it outside and close the garage. I’m told that those lavender bean eye pillows don’t do much to damp out vibration!

In a few minutes Roxy jumps out of bed as I head for the door, and the morning Schnoodle and I embark on the grueling nearly one mile commute to Mini Mania.

……UPDATE!   Well we sort of lost a week to some rain and snow and other priorities when we couldn’t come up with a switch. We thought it would be cool to use a rheostat switch to have infinitely variable  fan speed, so Mini Mania Purchasing Manager, videographer, and editor of most of the “How-To” and installation videos on Mini Mania’s web site, Brendan MacRae, grabbed a couple from his own stash. The T7 only requires two amps to run (three to start according to specification), and  the pair of wires to the fan are very small gauge, but by Tuesday, we had fried two small switches that wouldn’t slow the fan. We’ll have to order a more serious switch to have the variable speed. We connected the fan directly to power to hear it run for the first time.

Thank you to our friend Lance in Redding for offering to send me the left windshield demister that I’m missing. Until then, and I sort out another switch, I connected the heater motor to the unused wiper switch in the dash, and we have a single speed heater working. I drove around today, still without door windows, but the dogs and I could tell we had a heater for the first time!