TWINI TO BE FEATURED with PADDY HOPKIRK
Created: March 13, 2014
Featured at the Hopkirk Golden Jubilee is TWINI, the twin engine MINI Cooper race car specifically designed and built by Jacques Andres to win the 2014 25 Hours of Thunderhill endurance race hosted by the National Auto Sport Association and held each December at Thunderhill Raceway Park in Willows, CA.
Read Complete Article

Mini Mania tests the Twin Engine 4 wheel drive MINI Cooper
Created: February 27, 2014
The first ever Mini with 2 engines was produced by the factory in 1963, it was built on the original classic version of the Mini Cooper called the “MOKE”. The Moke was a jeep version of the Mini with intended military applications. It ran the standard 10” wheels and built simple by putting a second engine mounted on the original front subframe in the back of the vehicle. Originally the gear shift linkages were connected together along with the clutch and throttle pedal. This proved to be a bit of as nightmare as it was very difficult to synchronize both engines and transmissions.
Read Complete Article

The first ever Mini with 2 engines was produced by the factory in 1963 and was built on the original classic version of the Mini Cooper called the “MOKE”.  The Moke was a 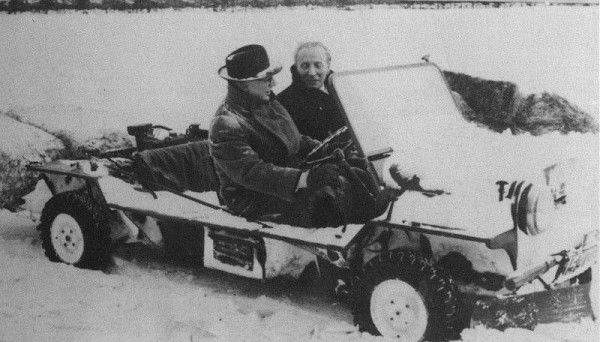 jeep version of the Mini with intended military applications.  It ran the standard 10” wheels and built simply by putting a second engine mounted on a standard front subframe but mounted at the rear of the vehicle. Originally the gear shift linkages were connected together along with the clutch and throttle pedal.  This proved to be a bit of as nightmare as it was very difficult to synchronize both engines and transmissions.  The solution was again simple- they installed a Mini engine with automatic transmission in the rear.  The prototypes were built with 1098cc BMC 4 cylinder engines. 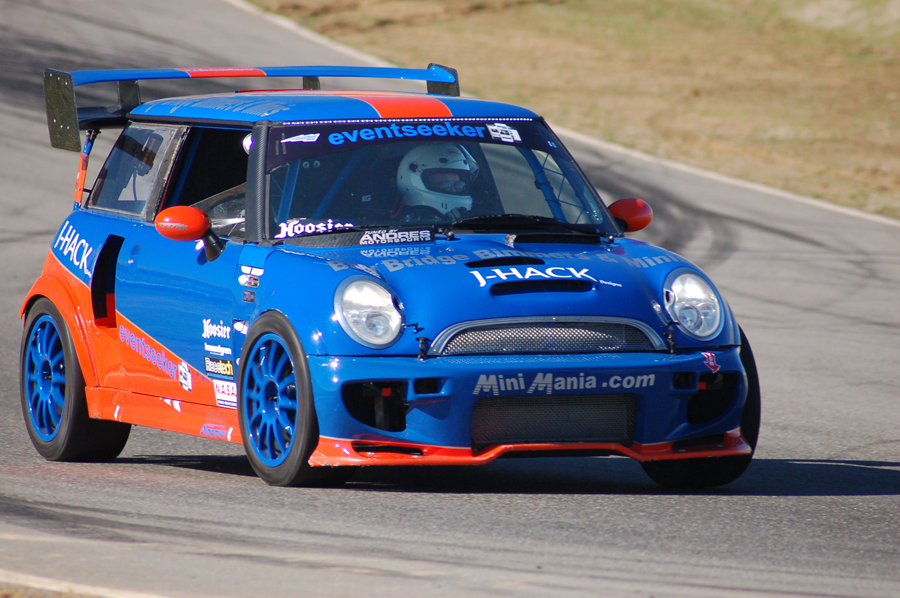 The modern version of the this concept has been built not by the factory but rather by the personal drive of an independent self made mechanic that clearly has more talent and imagination than many of the various teams of factory engineers!

Today, Jacques Andres owns a business that is the ultimate “one stop” shop for all your automotive needs.  His operation will make fast work of anything from the average tune-up to a full restoration.  He also operates his own body shop and thus can turn anything into a complete pride of joy.  As a passion he also builds race cars for himself and several customers that share the same dedication.  One of these customers provided Jacques with a 2002 MINI COOPER S to turn into a race car, and that he did with a flare that is best described as one of a kind.  This car was not only quick but got so much attention that, with Mini Mania sponsorship, was shipped to Japan where I was able to race it around the Fuji Formula One race track.

The MINI then sat around for a number of years when other projects took priority.  Jacques raced the car a number of times on the west coast and while competitive, it simply did not make the statement that Jacques has been know for.  He then conceived the idea of budget version of the ultimate MINI and began plans to simply add another engine in the rear.  Jacques, being the ultimate technical innovator, was definitely not short of the engineering talent needed to complete the project. However it was an unfunded project and so it took time to find the most cost effective components to complete the project to his high standards.  The project was an evolution but took about 2 years before it turned its first wheel.  And turn it did!!! 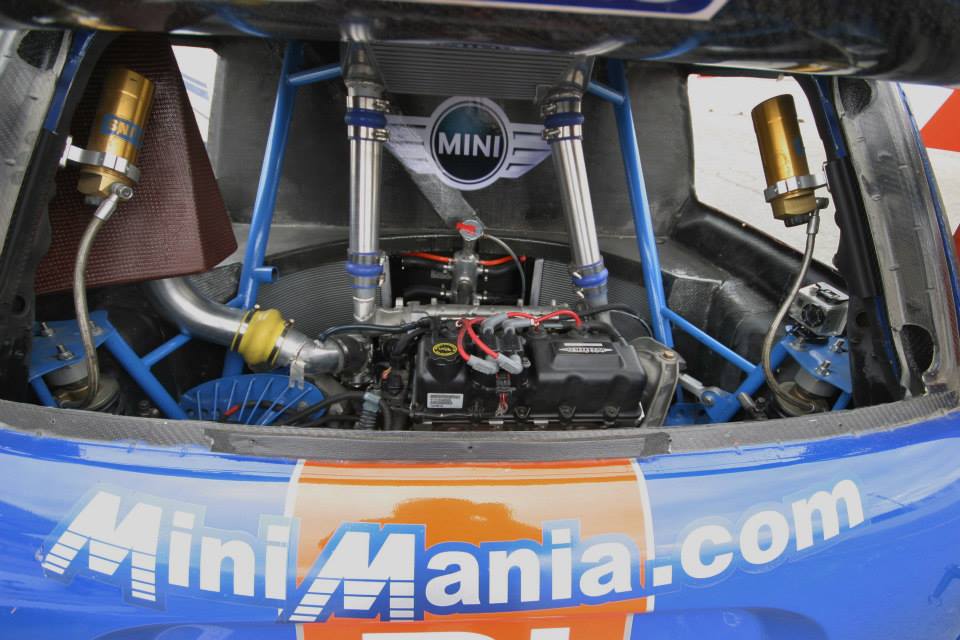 Jacques with his years of experience setting up race cars dialed in all the suspension set-ups, etc. that he was sure would work- WOW!  The very first time on the race track and the least you could say is awesome!

My first experience behind the wheel of this 4 wheel drive twin engine MINI COOPER S was on a day that had already provided a lot of opportunity to test a number of versions of the MINI.  The event was a MINI only day at ThunderHill Race Track, based in Willows, California.  The event has evolved over the years and the ‘Stormin' Norman's MINI Thunder' event this year drew 185 participants.  The event not only provides some great instructions for the novice MINI owners but allows those of coaching with lots of track time to test our various race cars.  My time as an instructor enabled me to log many, many laps in various Vintage race Minis including one of my own.  I also spent much time testing the limits of my 2013 JCW Coupe.  So with all this seat time in various versions of the MINI it was finally time to test the Mini Mania sponsored modern TWINI MINI!

Sitting in the car was an experience to be remembered- it was like sitting in the cockpit of a prototype Lemons car; carbon fiber every place, with more gauges than could be comprehended in less than an hour.  Everything was duplicated: two tachs, two boost gauges, two set of switches. Doubling up came as standard, right down to a wider gas pedal that activates two original assemblies.  When I last raced this car as a single engined vehicle in Japan it was much simpler!  The process to start up the TWINI required each motor to be started with separate switches.  Much to my surprise the noise was not overwhelming, probably due to the cabin being isolated with all of that carbon fiber.
Then it was time to get it into gear and roll off- again, it was much easier than expected. The clutch felt almost normal, although I did stall it the first time as I did not want to light up the tires the first time in the car.  Throttle response was great. Jacques had clearly got it right- the throttle travel seemed longer than normal but with all that power it is important to be able to apply the throttle in a modulated and controlled manner -- an on-off throttle controlling this kind of power would not be manageable on the track!.

I was advised to get the feel for the power and the brakes before trying to set a lap record and thus I was pretty conservative on my first circuit, yet was still amazingly fast compared to anything else I drove the entire day.  The remaining laps set my personal best times in a 4 wheel drive MINI.  The laps themselves were excitingly simple- the TWINI simply went any direction you wanted it to and at any speed.  The turn-in was great, the throttle response mid-turn was impressive, and the exit speed was thrilling to say the least.  Even if you never have a chance to drive such a car- you simply have to watch it on the track and you will be impressed. 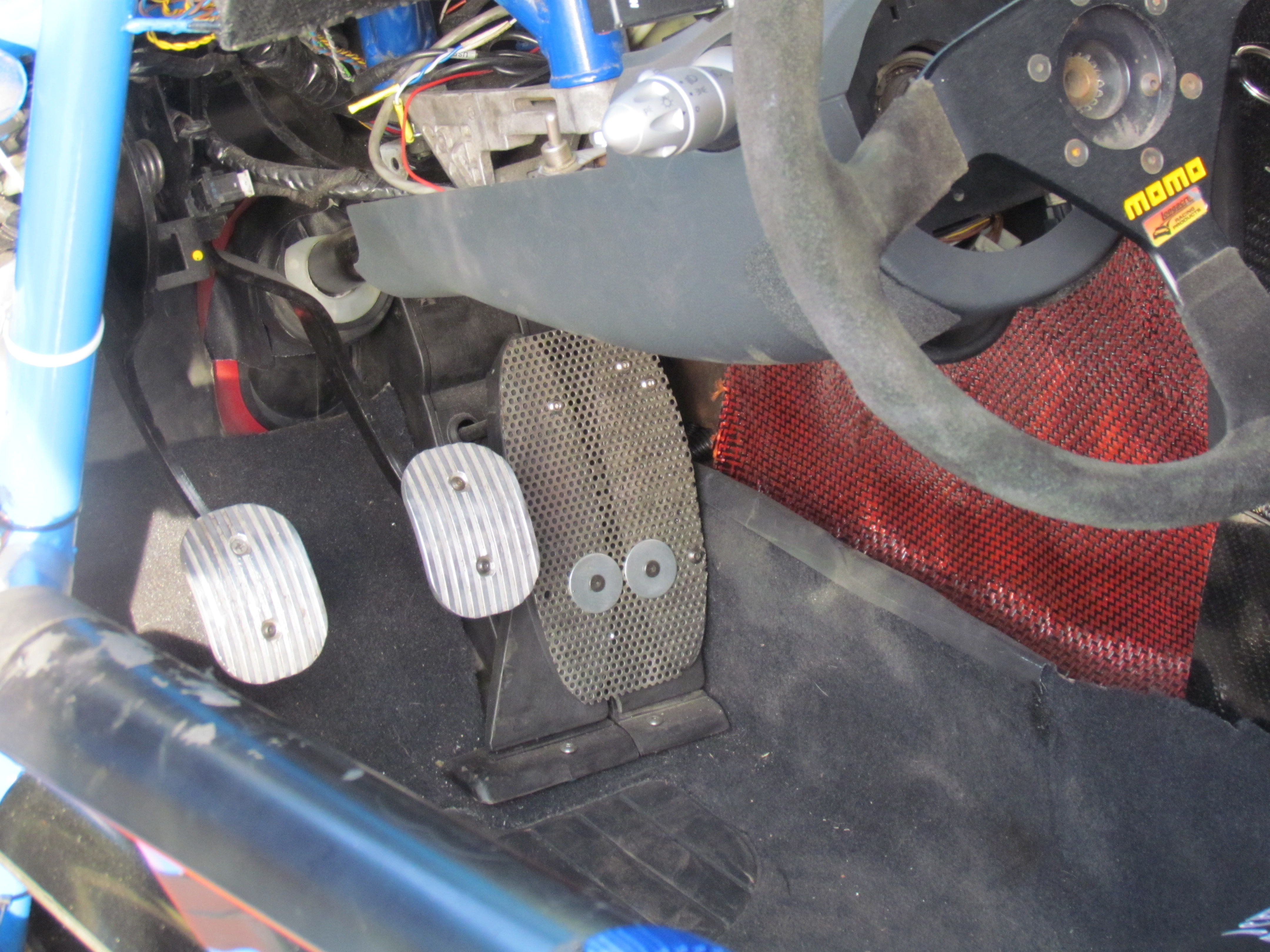 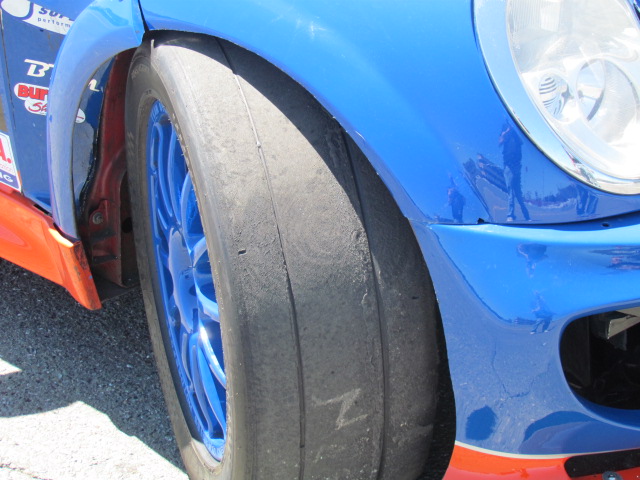 The front steering arms used as part of the rear suspension were simply locked in place with adjustable ends to keep them stock for ease of replacement and make rear toe adjustments a breeze.
Wheel size as I ran the car were 8X17, so it's hard to imagine how much better still it will be when the planned 10.5 X17 are installed.
Stoptech brakes are used on both the front and rear of the car, which of course in this 4 wheel drive version are the same.  The clutch operation is controlled by simply moving two cables in place of the original single version.  Both engines have been upgraded with many of the parts from the Mini Mania Stage kits.  While the sway bar on the front is an oversized stock version, the rear sway bar is a very custom creation that adds noticeably to the great balance that the car has.  With a total weight of the car in the 2,800 pound range the almost 600hp on tap allows for real control thru the corners.

Finally, as a point of contrast- some 35 or so years ago I also had an opportunity to race a twin engine classic Mini.  What a difference. This car was far less sophisticated than the BMW MINI but was truly remarkable for its time. 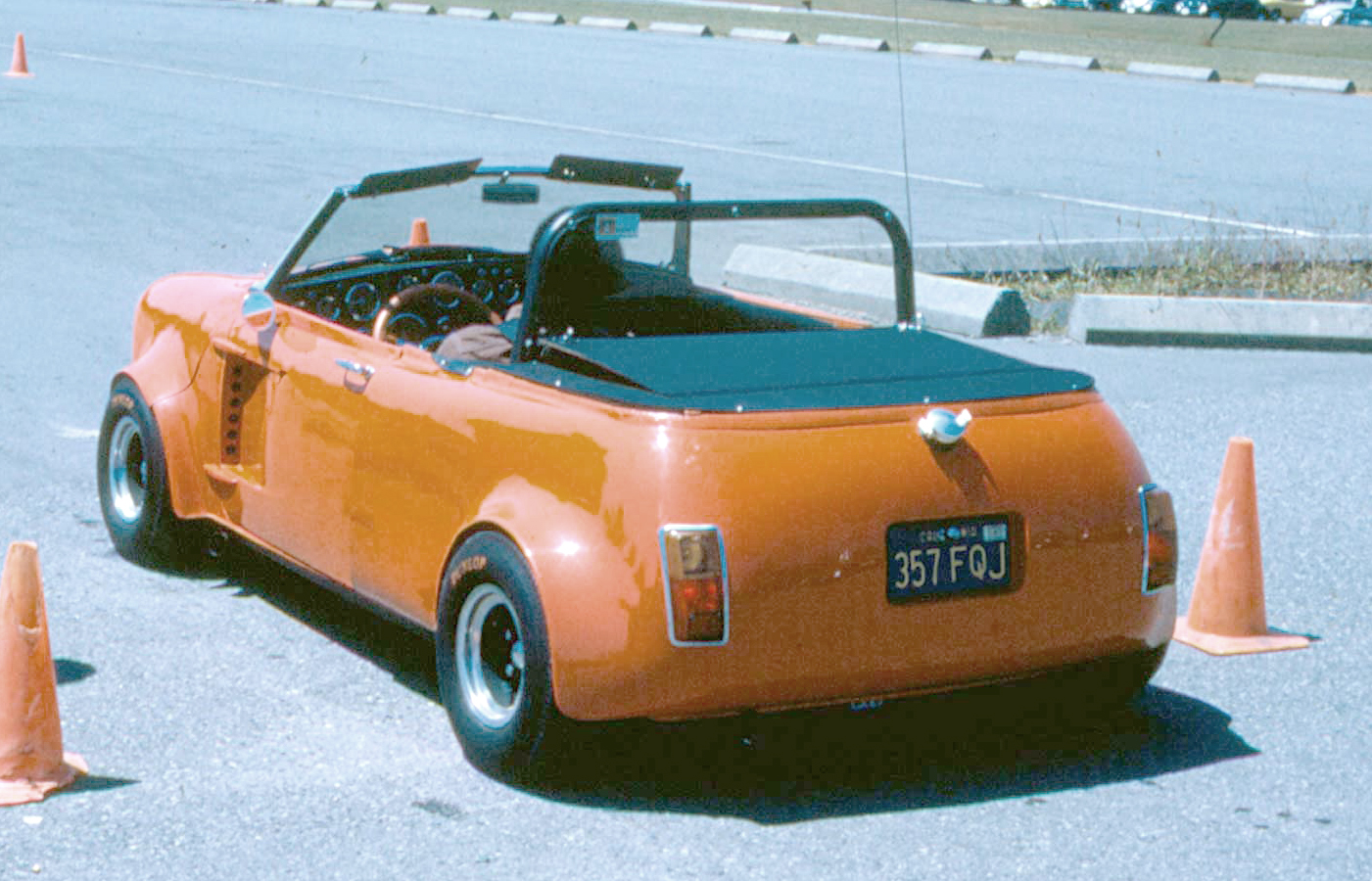