Reprinted with permission from www.miniexperience.com.au

Last time we chose a manifold based on flow volumes, and a carbie based on personal choice, but which combination is best on this engine?

With the engine finished, it is time to look at a variety of carburettors, inlet manifolds and exhaust extractors, to fnd the most suitable combination. There are a lot of fgures, but they are necessary, so bear with me.

But, before we do, we need to make sure the valve timing is set up properly. As I said in the last issue, even a very small difference can have a signifcant effect on the torque across the rev range.

I also mentioned the standard Cooper S rockers have a tendency to be quite a bit inconsistent. This was perfectly illustrated when I came to put the rockers on this engine – boy what a mess!

After changing the rockers around, I was able to get the four inlets somewhere near each other. As you will see from Table 1, all the inlet valve timings are pretty close to each other, at a setting of 0.016”. Only the inlet on No 2 cylinder needed adjusting, to 0.014”. But, the exhaust timings were still all over the place. This shows why some standard Cooper S were very quick, and some were only ‘not bad’.

I decided to aim for a duration of around 263 at 0.016”, with 0.332” lift. To achieve this I had to adjust the rockers for the exhaust valves to some fairly radical settings. When they are this far out, you would be advised to look around for some better rockers. But, I decided to carry on with these ones to prove the point, that when they are adjusted properly they start to come back to where they should be.

I have found that with setting up the cam on the small bore engines, they like to run slightly retarded – not split overlap or advanced. So, retard the cam 3 to 4 and you will get a bit more torque and horsepower.

For this sort of testing, you’ve got to make sure all other variables are standardised. I ran all these tests with BP 96 RON unleaded petrol, and used my favourite oil – K-Mart’s own brand, KMX 20W50. I use this oil in all my motors, for running-in and tuning, whether it is a high-revving Ford BDA, or a 500hp V8, and I have never had any problem with this oil.

The distributor is a Lucas 29D, with the advance stop welded up to give 7 to 8 at 3000-3200 rpm. The total advance for this engine is 26 to 27 , which means it had a lot of static timing. I fnd this a lot better because it allows the motor to idle off the advance, which means you can close off the carburettor butterfl y further. This in turn helps the motor to shut down and not runon, when the ignition is switched off. 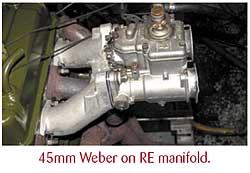 There is one drawback, though – you do need a good starter motor, as the old Lucas standard one doesn’t have enough horsepower for the job.

OK. Moving onto the dyno.

First, we tested some of the more popular types of extractors and exhaust pipes. With the motor run-in, I had to choose an induction setup that I knew would make good torque and horsepower. I selected my 5 ” Weber manifold, and a 45mm Weber with 34mm chokes. (I know we’re mixing metrics and imperial here, but that’s just the way they are.) After sorting out the jetting, with the water temperature set at 80 C, oil pressure 80psi hot, air temp 22 C, humidity 50%, and barometric pressure at 29.85, the correction factor was 1.003.

After a bit of testing of different exhaust pipe and muffl er setups, we settled on a pipe with 1 ” Outside Diameter and 1 ” Inside Diameter, a 16”-long muffl er with 2” ID, and a full-length back pipe – to simulate a full system on a Mini. 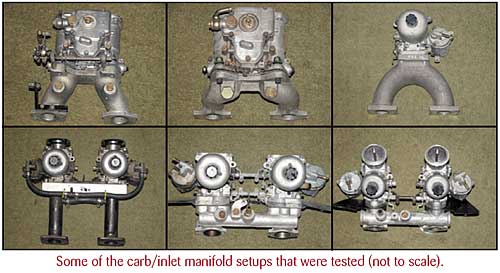 The fve sets of extractors we tested were, in order, Big-bore LCB (long-centre-branch), Manifl ow Free Flow, Medium-bore LCB, Bigbore 3 into 1, and Small-bore Supa Pipes 3 into 1. See Table 2 for all the fgures. 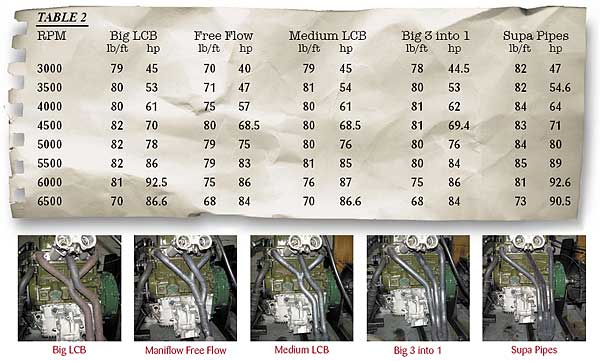 Being tested frst, and a popular choice for Minis, the big-bore LCB set a standard to measure against. The Manifl ow extractors were very interesting, dropping a lot of torque down low, but starting to pull back good fgures at the top end.

The medium-bore LCB, took a big dip in power at 6,000rpm, compared to all the other manifolds, which surprised me a bit. No matter how many times we tried it at that rpm, the result was always the same.

I originally wasn’t going to test the big-bore 3 into 1, because I thought they were far too big for this engine. To my surprise, they made very good torque down low.

The small-bore Supa Pipes are Australianmade, have a very small diameter pipe, with a special collector, are all Mandrel-bent, and produced the best results.

The fgures were all quite good, but in one way I am a little disappointed with the results, as they did not really show up the advantage of the smaller pipes on the small-bore engine, which I expected. I should have built the engine with only around 60-70hp, as the medium-bore LCB do perform better than the big-bore pipes, from my experience, on the smaller horsepower engines, but I have found the Super Pipes superior on small engines.

As the Supa Pipes gave the best results, we will use those to standardise the results for the induction tests (Table 3). 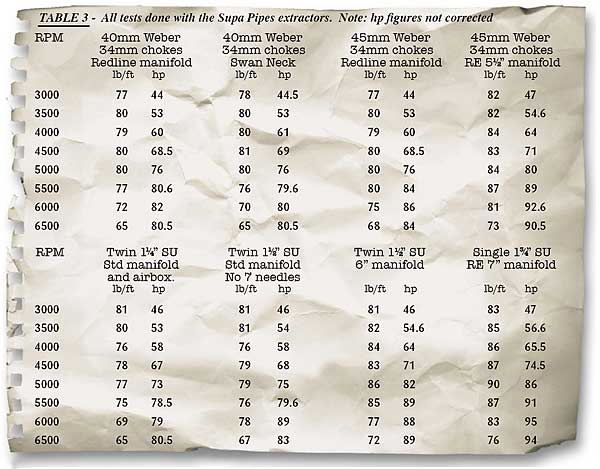 Although the RE gave good results, I think this manifold is too big for the small-bore engines. It has too much volume for a road engine, in so far as part-throttle driveability goes. 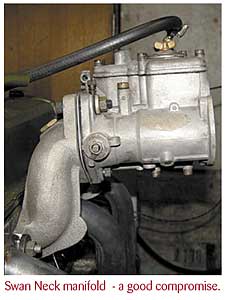 The Swan Neck is a manifold that a lot of people like to run down, but for the small bore road engines, making up to 90hp, it works very well. It has excellent throttle response, because of the small volume and high air speed, and is a very good manifold for road car use, with the 40mm Weber and 34mm chokes. However, it is not really suited to the 45mm Weber.

The Redline manifold, with 45mm Weber, was very good. With a bit of grinding down on the manifold face, this manifold would have matched my RE manifold on this engine. A fully-ported one of these will stop at around 125hp, and has excellent driveability on the road. 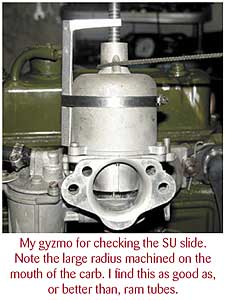 Now, looking at the SU carburettors. Before we start, you will see the little gizmo I made up, to measure how far the slide is lifting, when you can’t see the slide itself. All you need is a bar or tube of steel alloy, or wooden dowel. I’ve marked rings at ” apart. Strap a pointer to the bell of the carb, and line it up with the top ring on the bar.

As the slide rises, you can simply count off the number of rings to see what part of the needle your engine is running on. This is excellent for part-throttle openings, and I use this setup on engine dynos and drive-on dynos. It’s a bit hard to use when driving on the road though!

To set the standard this time, I used the standard Cooper S twin 1 ¼” SU setup. These proved to be a lot better than I expected, considering how short the standard manifold is. What was most interesting, though, was that we couldn’t improve on the standard air-box arrangement – BMC knew what they were doing here, for sure.

With the twin 1 ” SUs on the standard manifold, we had to do a bit of fddling around, trying various needles, to get the mixture right. We ended up with No 7 needles for the best results on this engine. These carbs did not have ram tubes or a standard airbox, but a radius had been machined on the front of the carbs.

We then tried the twin 1 ” SUs on a 6” manifold, which was a setup we used on the Mini 1000 racing cars about ten years ago. These worked really well once again, and I thought they would come out on top. They really don’t ft on a road car, without a lot of body modifcations, but I thought I’d throw them into the mix, to illustrate what I was saying in the last issue about longer manifolds being better.

The next setup was with a single 1 ” SU on my long (7”) manifold, which has a very large volume at the carb face and leads the carburettor into a long runner of the right shape and size. We had a lot of trouble getting the right needle for this setup, as the slide was fully up by 3,500rpm, and stayed there until we shut-off at 6,500rpm.

A single 1 ” SU was a waste of time on this engine, as it was just too small and could not supply enough air for this setup. But, it will work fne on smaller horsepower engines.

Two other manifolds I didn’t try were the standard cast manifold, cut off the exhaust (it simply didn’t ft over the exhaust pipes), and the Mini Spares 1 ” competition manifold. I’ve tested the Mini Spares manifold in the past and found that it works very well, is easy to ft, makes good horsepower, has good volume and have no problems ftting air-cleaners. However, I didn’t have one available for this test.

I think I made one mistake with this engine, in so far as it made too much horsepower. This meant it didn’t show up the differences between the big-bore and small-bore extractors, as I think would have been much more obvious on a motor that gave 60-70hp.

When choosing extractors, you can’t go past the small-bore pipes, medium-bore LCB or 3 into 1 small-bore. On the dyno, running the motor at and throttle, by putting a stop on it, the small pipes do make more power and have better throttle response, which makes for better driveability.

With inlet manifolds; if you want to run a Weber carb, my choice would be the Redline 4 ” or the Swan Neck. These manifolds on the small motors have very good throttle response, are easy to ft an air-cleaner when in the car, make good power and are good value for money.

If, like me, you prefer SU carburettors, then I reckon there is nothing quite like lifting the bonnet and seeing a well set up pair of SUs. If you are going to build a motor around 60 to 70hp, I would stick with the 1 ” twin SUs. I would rather see a better manifold, a little bit longer.

If you are going to run a single SU manifold, you have a few choices. Firstly, you can cut the original cast one off the exhaust and use this. If it is a late model one, then you can use any SU carb, from 1 ” to 1 ”, with good results.

If you use a Mini Spares, Manifl ow or similar, then stick with the big-bore one. There should be no problem ftting any of them, even with an air-cleaner.

To ft the Russell Engineering manifold, you will probably need to do some body modifications, depending on which carburettor you use – HS6 or HIF – and you will only be able to use an offset-type air-cleaner.

I would like to make special thanks to the following people, for their help with this testing.

Greg Brown from Karcraft Australia, for supplying the extractors for testing.

Greig Malaure from Mini Classic, for all his work in changing very hot exhaust systems, while I had to spend time answering the phone and making the cups of tea!

And a big thanks to all the people who loaned me carburettors and inlet manifolds.