The Phil Wicks MINI Driving Academy hosted the third annual “Minnie Challenge” at Nashville International Raceway on October 25-26.  The event is a fund-raiser for the Minnie Pearl Cancer Foundation and netted over $25,000 for the charity.  Open to all types of cars and motorcycles, over 50 cars and 50 motorcycles signed up for the safe driving clinic and performance driving school with all proceeds donated to the Minnie Pearl Cancer Foundation.

“I’m proud of our involvement with Minnie Pearl,” said Phil Wicks.  “In the past 3 years, we have raised thousands of dollars for the charity and I think that the participants in each driving academy have had a good time as well.  The Minnie Pearl people are a great bunch of dedicated professionals and it is an honor to be an integral part of their fund-raising activities.” 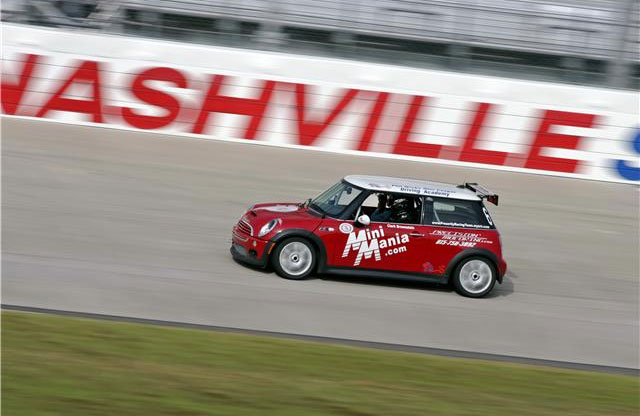 addition to the driving academy, the event hosted the final round of the North American MINI Challenge series and the championship was won by Clark Brownstein driving his Mini Mania sponsored MINI Cooper S.  Brownstein wrapped up the championship with a 7th place finish in the NAMCC race.

With only one Phil Wicks MINI Driving Academy event left on the calendar, a special 2008 return visit to Virginia International Raceway, Phil Wicks officials turn their attention to next year’s exciting schedule with both east and west coast events on the calendar.  2009 marks the 50th anniversary of the Mini Cooper as well as the 50th anniversary of Phil Wicks’ first racing a Mini Cooper on the tracks of Europe.  To mark the occasion, there are several special events scheduled to highlight the milestone anniversary.  Expanded events are planned to coincide with each stop on the schedule including a greater focus on Solo 1 events and the very successful “Time Trial” events introduced in 2008.“