Carburetors: Conversion from Injection to Carburetors

Carburetors: Conversion from Injection to Carburetors

IMPORTANT NOTE: This change should be considered a significant deviation from stock and thus should only be undertaken by a competent mechanic.

In the history of the Mini the drive to keep the product alive and marketable meant the factory decided to modernize the fuel system of the Mini from Carb to Fuel Injection. Thus in 1991 the first FI was installed on the Mini. Know as Single Point Injected or SPI for short, the system also incorporated its first ECU into the car. This version of the Mini was produced until late ’97 when it was changed to the Twin Point injected version (also know as a MPI Mini. The MPI model is a completely different set of problems and thus will not be addressed by this review. The SPI Mini might have achieved the objective of better fuel economy and emissions control, the loss of performance and reliability still chronicles the life of a SPI Mini.In addition the SPI Mini is very difficult at best to upgrade to get any significant performance enhancements.

Thankfully the best solution is still very practical- convert the car back to a single 1 ¾” SU carb and eliminate the ECU.This opens up the entire universe of performance enhancements & upgrades that have been developed so successfully over the years.

The basic elements of the conversion process are simple enough: Remove the entire FI assembly and ECU, Install a conventional 1 ¾” HIF series carb and manifold, replace the ECU with a simple relay, install a fuel pressure regulator and replace the Distributor. Wire and plum all of this together and you have it!

Wiring and plumbing diagrams are provided in the kit!

Included in this kit are all the basics you will need:

Not included in this kit are various assundry items that you will need for this conversion. They include wire, fuel hose, misc. electrical connectors, hose clamps, etc.

The first job was to remove the injection unit, which unbolts like any normal carb manifold. Because the inlet and exhaust manifolds are 2 separate units you can retain your stock exhaust manifold.Further gains in performance can be expected if the exhaust manifold and muffler system are also upgraded.On removal of the inlet, the mating face on the head needed cleaning to remove the traces of old gasket, after which, a new manifold gasket was put on. Next we bolted on the new carb and manifold.

Next was the distributor, the one for the SPI is no good for a carb mini because it doesn’t have the little box on the side for the coil connections; it uses a control box which is linked to the ECU. For this application we will simply have a later model distributor with the “little black box” already mounted on the side of the distributor. Figure 1, below, shows how it is wired.Make 2 new wires to go from the coil to the dizzy, there are ways to do it using the existing coil wires, but my way is easier! Firstly, use the original wire that supplies power to the coil from the loom, then find 2 pieces of wire around 8” long and put the relative connections on the end for one to go from the “ + “ coil terminal to the dizzy, and one to go from the “ - ” coil terminal to the dizzy. On the dizzy we used, it had a 3 spade connection on the little box on the side; one of the wires went to the top one and one to the bottom one. If the engine won’t spark when you turn it over try changing the connections over, so the top one is on the bottom and vice versa.

Ignition (distributor) timing should be such that total advance should be in the 28 degree range when at 3,500rpm. NOTE: iF a points type distributor is used you will need to match the ignition coil with the ea 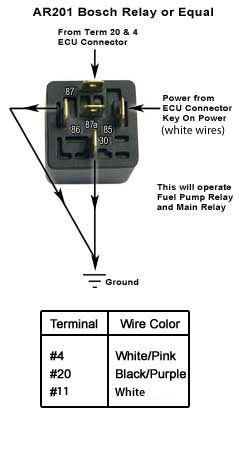 The next step involves getting the correct fuel pressure to the carb and getting a return line back to the fuel tank.When you removed the ECU you removed the means to activate the fuel pump, etc.The pressure put out by the stock pump is way too much for any carb set-up.Thus we have to plump the regulator in line from the tank before the carb.But as the pressure is very high and the car was already set-up with a return line to the tank, the best method short of replacing the gas tank and fuel pump is to simply install the regulator with a second output that is returns the unwanted pressure back to the gas tank.

It is also important to not vent too much pressure and thus we use a .001 mechanical restriction in this line.Connect the line from the tank to the input side of the regulator; one of the outputs goes directly to the carb, while the second out goes through the restrictor to the rear. Provided in this kit are 3 brass adapters for the regulator. A visual check will tell you that one of the small one has a restrictor inserted into it and thus should be used on the line returning to the fuel tank.The largest of the three should be used to connect the input line from the tank to the regulator.The third one is used to connect the regulator output to the input of the carb.

Next comes the process to activate the fuel pump and the rest of the primary electrical system now that the ECU has been removed.While it might sound simplistic, we are going to use the single relay included in this kit to replace the ECU.Find a suitable place to securely mount the relay. The wiring diagram included in this kit shows connecting from the ECU plug terminal 11 to terminal 85 of the new relay.From Terminal 20 &4 of the ECU plug to terminal 87 of the relay and then take terminals 30 & 86 of the relay and go to ground. (Click on image at right for a larger view.)

The car should now be ready to go!Try it you will love it!

Have a Question or Comment of your own? Click here!
Question:
I’ve seen your kit to convert SPI to carb and I’ve purchased a couple of parts, the relay and the fuel regulator, I only needed these parts as I have carbs and an A+ electric dizzy from spares collected over the years!
Answer:
We do have an article that details the wiring and plumbing HERE - it shows relay wiring locations as well.

Question:
do the gauges/indicators on dash still work with conversion? is a different coil needed for the new distributer? the SPI head does not have a coolant temp sensor location, what works best otherwise? is a choke cable included in kit?
Answer:
Hi, You might check your voltage to the coil. The distributor that comes with the kit will require a 3 ohm type.  The gauges should all work, but you do need to find a new port for the temp sensor. Either in the head or use a different water outlet that can be tapped and threaded.
Give a call if you have any questions.
Mini Mania Tech Support
7 Comments
From:
pacemaker
Date:
11/26/2013 @ 7:18 AM
Comment:
A good regulator is a .035 mig tip inline from the test port of the feed line.
From:
Rick
Date:
09/17/2012 @ 9:30 AM
Comment:
Why does nobdy utilize Split 45 DCOE Webers on a highly modified engine. Are they no longer legal in Vintage or the classes of racing that a 1275 S competes in? I know these were offered by Longman but doesn't someone else offer the manifolds?
From:
craig
Date:
06/12/2012 @ 12:00 PM
Comment:
i need a copy of the wiring diagram someones half done the job, fitted everything but not took out the ECU and replaced with the relay :S its a pain

could someone help ?? mail me it [email protected]

>>>The web site you are on! www.minimania.com

From:
Kingfisher
Date:
04/23/2012 @ 2:55 PM
Comment:
After a chat with Don Racine, he confirms that the ECU can be completely done away with when installing the conversion kit.
From:
Kingfisher
Date:
04/22/2012 @ 8:09 PM
Comment:
Can the ECU really be done away with as this article states? Will this also do away with the engine imobilizer?
From:
DonRacine
Date:
10/25/2011 @ 7:08 AM
Comment:
Note: The Haynes manual lists pin 20 of the ECU as having a black wire with purple tracer, Pin 4 as having a white wire with purple tracer and Pin 5 as having a green wire with blue tracer. Pin 11 in the Haynes manual is a little confused as the start of the wire is listed in white but then seems to connect to a junction to become a black with white trace.
Please Wait