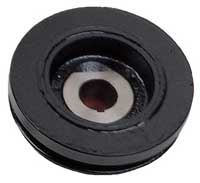 The Mini harmonic balancer is a component that attaches to the front end of your engine's crankshaft to prevent torsional vibration. Also called crank pulley damper or vibration damper, a harmonic balancer is actually made up of three parts: a steel inner part which bolts to the crankshaft; a steel outer part that has a groove for the belt; and a rubber disk in between the two steel parts. As the engine tries to turn the crankshaft, it ends up twisting the rubber part of the damper instead. Thus, twisting of the crankshaft is prevented and its smooth rotation is ensured.


If torsional vibration is not controlled, and it can be to a degree, premature main bearing wear and possibly main journal wear on your crankshaft can occur. This can even cause crankshaft breakage.  The vibrations that occur in your engine are not just a threat to engine failure caused by metal fatigue, they are torque and horsepower robbers. If you can reduce engine vibration, you can eliminate power robbing effects such as spark scatter and you can improve valve timing accuracy. Think about it for a second, if the crankshaft is vibrating, it is the vibrations that are transferred through the timing set (timing chain, timing belt, gear drive) to the camshaft, to the rocker arms, to the valves. . Don’t be confused by the phrase “harmonic balancer.” The damper is to control harmonic vibrations, not necessarily to balance the engine’s rotating assembly. The balanced rotating assembly depends on the crankshaft, rods, etc.. The Mini engine must be internally balanced and only uses the damper for harmonic control. The harmonic balancer can efficiently prevent excessive torsional vibration, but only if it is in good working condition. Once damaged or worn out, it could cause fatigue and fracture of the crankshaft, destruction for the couplings, and inefficiency for the engine. Once damaged or worn out, it is advisable that it be replaced immediately.Mini Dampers were made in a couple configurations but in almost all cases a visual inspection of the rubber ring within the damper can predict it’s effectiveness. Pictures below are 2 examples of dampers that absolutely should be replaced.

The BMW MINI Cooper & Cooper S engines have Vibration Dampers that also function as the front pulley.  The technical method of balancing the vibrations of the engine are a little more sophisticated but are all still internal in the pulley. 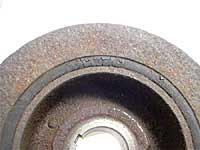 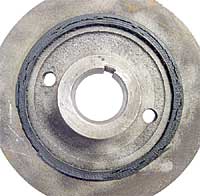 Have a Question or Comment of your own? Click here!
2 Comments
From:
Cheleker
Date:
07/09/2013 @ 9:05 PM
Comment:
Almost certainly something other than the damper based on your description. With the huge "PosePack" wheels and tires your problem is most likely tire/wheel balance. Of things to look for, the damper on a 1999 car would be about last on my list of suspects.
From:
TSH
Date:
07/09/2013 @ 6:59 PM
Comment:
If the damper is failing would it be noticed with the car at a standstill and reving the engine? I have a very periodic vibration felt trough the steering wheel when going 80mph at ~3500rpm. It comes and goes every few seconds. Under acceleration it lessens but if I lift off the throttle it tends to worsen. Are these symptoms of a failing damper pulley? If not can you describe some tests I can do to determine if the damper pulley is failing.

The car is a 1999 SportsPack with 48000 miles rhd. I have checked the front wheels and there is no looseness. I am planning on having the tires balanced and a alignment done. If that does not help with vibration at speed I would consider damper pulley next.

Thanks for any feedback. Regards, Tom