Mini Mania Across America 2016
Created: June 02, 2016
When all the stars line up it was an easy decision to make the plans for this blitz of America. In about 35 days the plan is to race four different Vintage Races, attend both Mini Meet West and Mini Meet East, returning to California in time for the July 4th celebrations

Photo Log Part 5 - Mini Mania Crosses America
Created: September 03, 2013
Don took the mini through tech inspection...passed with flying colors. That evening there was an escorted parade of the race cars along a 17 mile route through quaint New England towns. It was quite a thrill to hear (muffler sound restrictions lifted) and see about 100 race and classic cars winding through the countryside.

When all the stars line up it was an easy decision to make the plans for this blitz of America. In about 35 days the plan is to race four different Vintage Races, attend both Mini Meet West and Mini Meet East, returning to California in time for the July 4th celebrations.  This 7,000+ mile trip will tax both driver and equipment to the extreme.  # of the 4 races are 3+ day events that will for sure use up a number of tires and really test the quality of the race car, even if only for endurance. While all the races are sprint races of about 20 minutes each, it the shear quantity of them that could take it toll! 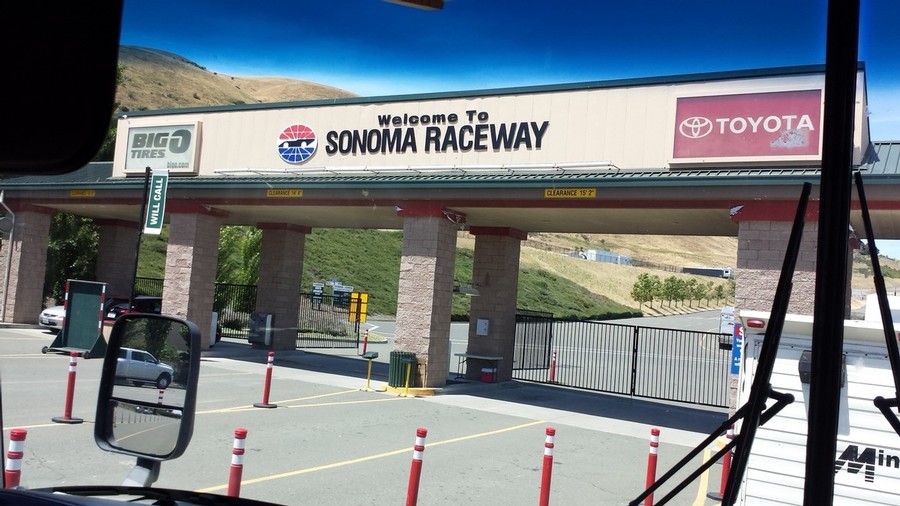 The first stop on our tour is the Sonoma Historics put on for the second year by SVRA.  This event is one of the those that has been going on since 1985  and while we have been fortunate to have been invited to every one of them, The SVRA gang has added lots of reasons to do it again.   With over 300 cars entering the race, loading into and setting up in the pits started on Wed. We have 7 cars in our paddock space and that includes 5 classic Minis.  The 4 Minis from Team Mini Mania were joined by Nick Martin that is racing the same Mini his dad built in *********
Setup was pretty busy simply due to the not so unusual warm afternoon sun with lots of winds.  Keeping 10 E-Z ups from not blowing away and be a real chore before cars are in place to tie everything to.
Next on the agenda is the technical inspection of the cars.  SVRA sure has it right for this event as rather than trying to line up 300+ cars for individual inspection, he process was defined as a "Roving inspectors".  This meant that all we had to do was wait and one of he inspectors would come to us rather than us have to bring all the cars to them.  Nice touch and made it easier for everyone. The inspection covered both safety equipment and car compliance to current rules.