Related Parts
Small bore piston applications
Created: December 20, 2013
Small piston applications and availability have been changing over time
Read Complete Article
Arias Pistons
Created: April 11, 2006
Arias Pistons
Read Complete Article
PISTONS -Features for Maximum Performance
Created: July 02, 2001
The overriding factor that influences just what is best for an A-Series engine is the block's propensity for flex at higher rpm, and the crank's equal propensity for flex at the same sort of rpm levels. Both combine to require a piston that is as stable as possible to maintain effective and consistent ring-seal performance.
Read Complete Article
Piston Information
Created: April 07, 2000
When Omega quit making A-Series pistons, Mini Spares took it upon themselves to design and build a better Piston. Recruiting the AE Hepolite Group for their unquestionable and renowned design and manufacturing expertise, the goal was to produce the most robust piston possible given reasonable cost and weight limits. Applying current technological advances incorporating their very latest hi-spec AE109TF lightweight alloy and special double heat treatments, the result is an extremely durable piston that will withstand greater cylinder pressures at higher RPM than any other currently available.
Read Complete Article
Piston Fact File
Created: January 30, 2000
Over the years, there have probably been a dozen "stock" 1275 pistons. Currently, three different designs are available from AE/Hepolite as "stock" replacements. All have an 8.4cc dished top, but compression ratios are carried by changing pin height (Pin height is the distance from the top of the piston to the center of the wrist pin- see dimension "A" shown here).
Read Complete Article


The two other articles I have done on this site concerned what pistons are all about, different design and construction pros and cons, material specs, ring set-ups and so on. Under 'Pistons - Favorable features for maximum performance' it would seem that the Mega pistons fit the bill just about spot on for all but perhaps the most extreme of racing engines. Or are they? Having used these pistons in all sizes from +0.020" to 73.5mm in all aspects of use - road/street to full race I am now in a position to give a report on their performance.

Some have reservations about using the pistons in racing engines because they are a few grams heavier than other pistons available, and they are cast as opposed to forged. However, Mini Spares recruited the AE Hepolite Group for their unquestionable and renowned design and manufacturing expertise. The goal was to produce the most robust piston possible given reasonable cost and weight limits. Applying current technological advances incorporating their very latest hi-spec AE109TF lightweight alloy and special double heat treatments, the result is an extremely durable piston that will withstand greater cylinder pressures at higher rpm than any other currently available.

To simplify the range, material has been concentrated around previous problem areas – the ring lands and crown – providing one crown height. This ensures sufficient material in critical areas to allow machining where long stroke cranks or longer con rods are used. The design guards against premature damage from poor/low quality modern fuels, the rings re-sited to minimize detonation damage in high compression engines. The ring dimensions are compatible, and therefore interchangeable, with the Omega Mini piston range. Full-circle skirts are used for maximum piston and ring stability. They also feature a specifically designed ridged finish to retain oil to protect against scuffing and galling at start up and cold running. A tapered pin is employed to maximize stiffness against lightest weight. In all - utilizing all that technology and development has identified as necessary in a performance piston for the A-series engine.

Two engines I have using the 73.5mm size are used in European racing where they clock up some three times the amount of racing miles as would be the norm in England - so something like 1,200 racing miles instead of around 400. Some of the events are long distance (1 hour long) at circuits like Spa and Le Mans where the engine is held at maximum rpm for very protracted periods. One engine is now in its fourth racing year the other in it's third - both with the same piston sets fitted at the original build. I have merely honed the bores and replaced the rings as a matter of course - although another engine I have done has just been re-built with no honing and the year-old ring pack put back in since I could not determine any tension loss in the rings! 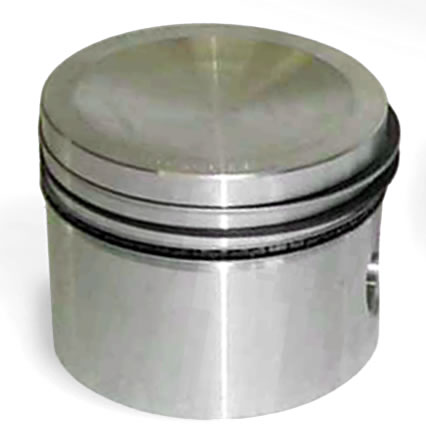 One engine in which I was particularly interested in was that built by a friend. This engine is a 1330cc (standard stroke +0.060") used in a classic group one touring car 1275GT pumping out some 135bhp, revving to 8,700rpm regularly (and more according to the tach tell-tale!!), running 14.5-1 CR on super unleaded fuel with Millers VSP additive, fitted with twin HIF6 carbs and normal distributor advance curve control and ignition. The reason I was so interested in this one was because he was running the pistons with 0.100" machined off the crown - so the top ring was only a mere 0.175"/4.44mm from the crown - plus an offset bowl was then machined in. Now, running the top ring nearer the crown is supposed to be better for power production but can lead to premature detonation damage of both piston and ring if quality isn't absolute top-draw. In the A-series it has always been universally agreed that around 6-7mm is best. The bowl reduced the piston crown thickness to 0.139"/3.53mm - getting pretty 'thin'…

The result? The driver won his class in the championship, took a heap of lap records (all circuits visited I believe), gave much more powerful cars a run for their money, and the engine lasted all season with a strip-down revealing no piston problems - so were re-installed with new rings.

Noteworthy Observations About This Engine

The only thing I noted about the engines I built/re-built was that the pistons were polished to a mirror-finish shine just above the top ring land directly above the wrist pin bore on both sides of the piston. The perfect shine was evidence that the pistons hadn't actually been scuffing the bore (and there were no marks in the bore to corroborate this), but seem to be running very close to the bore walls when under maximum load/heat. I put this to AE; all they said was that the crown must be doing it's job of filling the hole to perfection since they were not actually scuffing and is therefore no cause for concern. All I can do is support this since out of all the engines using these pistons I've built over the past few years none have seized, all produce the sort of power I would expect them to produce, accelerative performance is not hindered, peak rpm is not reduced and the pistons/bores have been totally re-useable. 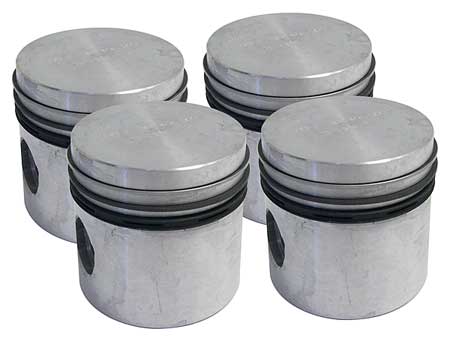 Testimony, I believe, to AE fulfilling the original design parameters and to the performance and durability potential of the Mega piston range.

The other quirk I have noticed is that the oil control rings used cause the engine to be somewhat tighter at the build stage than the Omega type. I queried this with AE, and they assured me the ring design and sizing was correct and that they would seat in when run. The reason for the extra initial tension was to ensure as oil tight a seal as possible once run in to eradicate as far as possible two things - oil contamination of the incoming charge and increased crankcase pressure caused by blow-by. Tight control over both promotes maximum power output and massively reduces emissions problems. And they were right - after a slightly longer running-in period than expected when running the Omega-type rings power out-put was right up there and even after a season's racing the oil control was phenomenal.


Mini Mania carries a large assortment of Pistons and Rings that are comparable if not the original products.

Have a Question or Comment of your own? Click here!
1 Comment
From:
Andy
Date:
12/08/2012 @ 6:17 AM
Comment:
Hi keith. So you would recommmend the P22357S for my Modded Metro turbo engine rebuild, Do you have any other help tips woth regard to my question.