SU CARBURETORS - How They Work 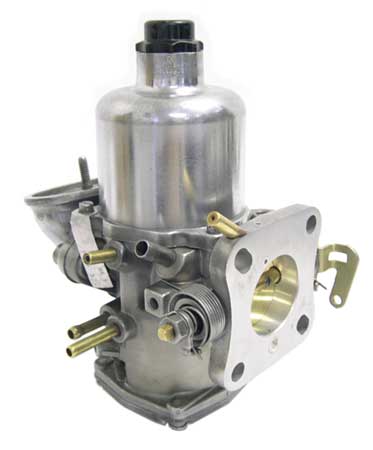 Even though the SU carburetor (carb) is a very basic yet precise instrument, some fundamental understanding on just how it works is needed to be able to deal with common problems and tuning. Following is as basic a description of what's going on that I can manage! First you need to be comfortable with the main aim of any carb - to supply the engine with a finely atomized fuel/air mixture in the right strength for all operating conditions. This means from idle to flat out and everything in-between. All carbs achieve this using the same method - a venturi or choke (restriction) is used to speed up the velocity of the in-coming air to create a reduction in pressure. This is used to draw fuel from the float chamber via a suitably sized jet hole into the air stream, and hence into the engine.

The perfect carburetor will supply the engine with optimum mixture for both maximum power throughout the full throttle-angle range (variable restriction - as in butterfly and spindle) and minimum consumption under all part-throttle conditions. Easy, eh?


All Choked Up
As air passes through a choke of a fixed size its velocity and depression over the fuel jet hole varies with engine demand, generally controlled by the throttle (i.e. how far open it is). This varying depression needs some form of control/compensation to produce the correct fuel flow. It also compromises the choke size choice. Too small will cause a restriction to top end performance, too large will cause poor fuel metering and low speed running. One solution where a single fuel outlet point (jet hole) is used is the variable choke. As the name suggests, this provides a means where the choke size will become larger as demand increases, smaller when it diminishes. This will ensure a constant air velocity and depression across the jet hole. And that's exactly the method used in the SU where the closely fitting piston/suction disc assembly in the suction chamber (commonly known as the 'dashpot') varies the choke size as it rises and falls. The rise and fall is effected by a series of holes. There are usually two in the under side or side of the piston facing the butterfly, and lead up into the suction chamber. These sense any depression existing between the jet hole and butterfly, passing this into the suction chamber. The under side of the piston/suction disc is vented to atmosphere by another pair of holes. Usually on the air cleaner mounting flange.

Fueling About
To go with our variable choke size we need to control the fuel flow rate accordingly. Simply achieved by a tapered needle fixed to the piston/suction disc moving in and out of the fixed jet hole size.  Accurate dimension of the tapered needle gives the correct fueling for each application. Enrichment for cold starting is again simply achieved by lowering the jet tube, a linked lever that also opens the butterfly slightly.

Sum of the Parts
It works like this. Opening the butterfly allows manifold depression to be passed to carb body and suction chamber, causing the piston to rise. This allows a fuel/air mixture to pass underneath it to relieve the depression. The piston stops rising once the depression has reached a value sufficient to balance the combined weight of piston and piston spring. The piston height achieved is therefore governed by the mass of fuel/air flowing under it. The same depression is obtained whatever the demand, and is arranged to be sufficient to give optimum atomization, yet small enough for adequate filling at high engine speeds.

Close Control
The piston also has a hollow tube up the middle of it to hold an oil reservoir. A one-way valve runs in this, fitted to the end of the damper rod. This restricts the rate at which the piston rises, but allows it to fall freely when the butterfly is shut. Its purpose is to cause mixture enrichment needed for decent 'pick-up' when accelerating. This occurs because the damper's slowing of piston lift speed increases the depression over the jet hole. The result is extra fuel being drawn into the air stream. The 'accelerator pump' of the SU. Damper oil temperature fine-tunes control of this. Its high cold viscosity slows the piston further causing greater enrichment when cold, easing as it gets warmer.  How simple can you get?

The Carb Shop
Mini Mania is proud to announce the opening of the Carb Shop. We now offer in house carburetor rebuilding, specializing in HS & HIF, SU models.

SU Reference Catalog Review
The workshop manual has a wealth of information on all the various styles of SU carburetors and fuel pumps. The manual starts out with an easy to follow and very explanative summary of the basics of the SU carburetor design and functionality. The manual is well organized into sections covering the basic families of SU carbs and fuel pumps.

Needle codes for SU carbs
Here are a selection of needles codes and the vehicle specs that they were used in...

Carburetors: Conversion from Injection to Carburetors
In the history of the Mini the drive to keep the product alive and marketable meant the factory decided to modernize the fuel system of the Mini from Carb to Fuel Injection. Thus in 1991 the first FI was installed on the Mini. Know as Single Point Injected or SPI for short, the system also incorporated its first ECU into the car. This version of the Mini was produced until late ’97 when it was changed to the Twin Point injected version (also know as a MPI Mini.

FUEL SYSTEMS - The History of SU Carbs
Strangely enough, it all started way back with William Banks Skinner; one of the owners/directors of the well-known Lilly and Skinner footwear distributors. In April 1872, W B Skinner's wife gave birth to George Herbert Skinner in Ealing, London.

SU CARBS - Dashpot oil.
This subject is a regular message-board poser. Many of us have touted our preferences and discoveries whilst playing about over the years. One problem with trying to deal with it on the message board is the sheer volume of information offered and available against the time available to post it.

SU Carbs - HIF, a more finely honed instrument.
The basic SU design has maintained the same basic format since it's inception. But modern technology continually sweeps its ever-growing arm across all manufactured products and the SU was no exception.

Synchronization of Twin SU HS-type Carburetors
Before proceeding to synchronize your carburetors and for best results, some preparation is in order. Your carburetors should be in peak condition with no play in the throttle shaft bushings. If these bushings are worn, synchronization is difficult or impossible to achieve since there will be a vacuum leak past the bushings.

Carburetors Installation of HIF6 or HIF44 Carburetors
The HIF-series carburetor differs from the HF-series primarily in: 1) The design and location of the float chamber, which has been incorporated in the body of the carburetor, and 2) The introduction of temperature-sensitive mixture control to compensate for varying fuel densities resulting from changes in fuel temperature.
Written By: Keith Calver
Article Date: Sep 01, 2000

Have a Question or Comment of your own? Click here!
4 Comments
From:
Cheleker
Date:
06/10/2015 @ 8:13 PM
Comment:
Randy, the "knob" does cover a place that needs oil; however, not to lube the carb. The oil helps control how fast the piston moves upward making sure that the needle is in the correct position to get the correct fuel mixture flowing to the engine depending upon the throttle opening.

Your "surging" issue could be a number of things, some of them not having anything to do with the carb. I'd suggest you get your car to someone familiar with Minis, or, at least, familiar with SU carbs. A very common mistake is to blame the SU for a problem that could be elsewhere. A general rule to follow is that unless you are certain the carb is the issue, don't start by messing with the carb.