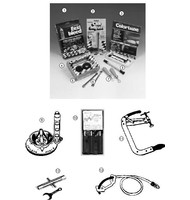 View in Catalog
Part No: 111-6083
Internet Price $4.95
Will this item fit my car?
SU fuel mixture wrench is small enough to fit on your keyring so it will always be handy.

Have a Question or Comment of your own? Click here!
SU fuel mixture wrench is small enough to fit on your keyring so it will always be handy.

Needle codes for SU carbs
Created: May 21, 2005
Here are a selection of needles codes and the vehicle specs that they were used in...
Read Complete Article

FUEL SYSTEMS - The History of SU Carbs
Created: December 12, 2002
Strangely enough, it all started way back with William Banks Skinner; one of the owners/directors of the well-known Lilly and Skinner footwear distributors. In April 1872, W B Skinner's wife gave birth to George Herbert Skinner in Ealing, London.
Read Complete Article

SU CARBS - Dashpot oil.
Created: September 29, 2000
This subject is a regular message-board poser. Many of us have touted our preferences and discoveries whilst playing about over the years. One problem with trying to deal with it on the message board is the sheer volume of information offered and available against the time available to post it.
Read Complete Article

SU Carbs - Quick reference needle selection
Created: September 08, 2000
Being an oft-voiced question on the message board, I thought I'd share it with you. Since there is already a very good source of starting points/applications for fixed needle carbs, this is for those floundering about in the wilderness that is the biased (swinging) needle example of the breed.
Read Complete Article

Synchronization of Twin SU HS-type Carburetors
Created: January 29, 2000
Before proceeding to synchronize your carburetors and for best results, some preparation is in order. Your carburetors should be in peak condition with no play in the throttle shaft bushings. If these bushings are worn, synchronization is difficult or impossible to achieve since there will be a vacuum leak past the bushings.
Read Complete Article