Choosing The Right Timing Set For Your Engine

Over the decades, Minis were produced with several styles of timing chains as requirements for performance or durability with bigger engines and heavier valve springs dictated.  The early small-bore engines used a single row chain and sprockets that were "tensioned" by two rubber disks affixed to the larger camshaft gear. 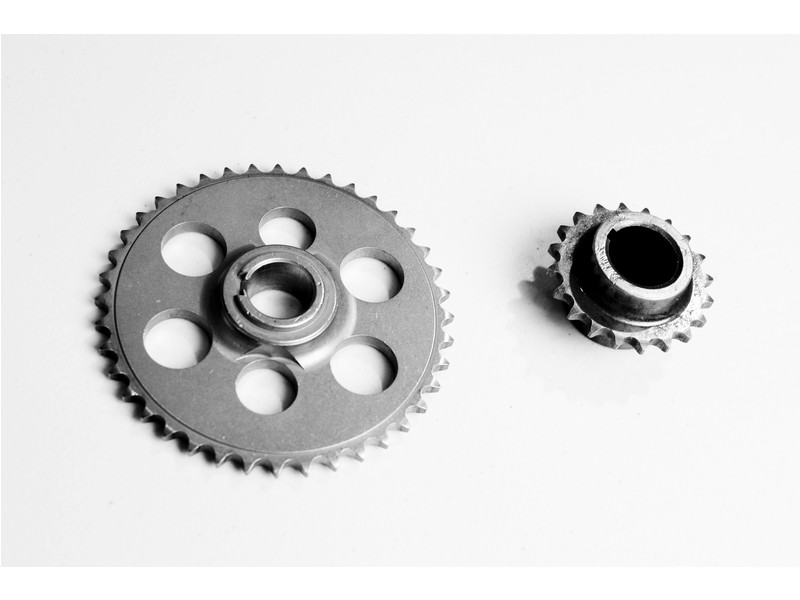 These placed axial loads on the chain, acting as a damper and kept the chain from slapping around inside the timing cover.  As high performance engines with big cams came along, double row chains and sprockets provided the durability and accuracy for high RPM operation in typical hot-rod fashion.  Finally with the move to A+ engines in the early 1980s, a very effective single row chain and sprocket set coupled with a spring loaded tensioner provided very reliable cam timing for the service life of the car. 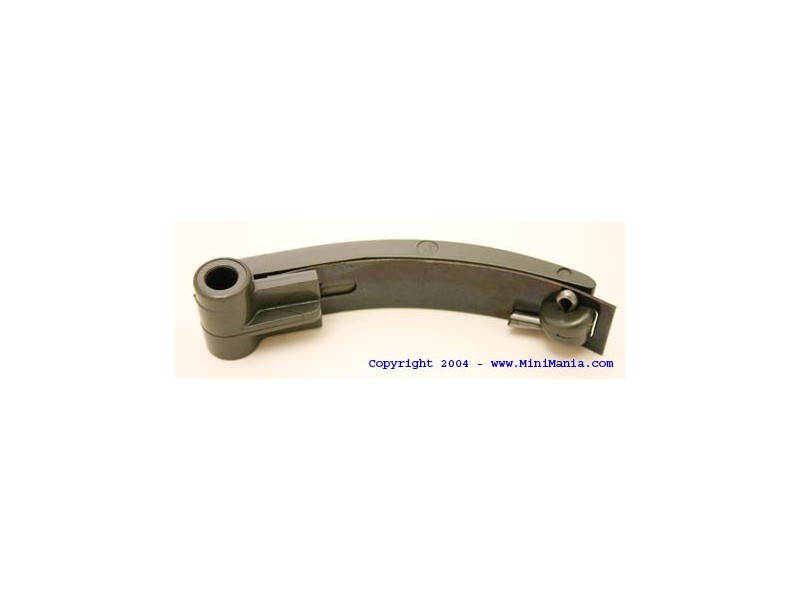 Fast forward to today!  You are building a high performance 1275 or bigger engine for the street, and have studied your options, settling on a stout "duplex" timing set.  When installed however, you find that the chain just has too much play for comfort. Why bother setting the cam timing when you have 2 or 3 degrees of slop with a NEW timing set!  Now what can you do?

The nature of the design of the A-series block means a crankshaft line-bore (if needed during a rebuild) will raise the crankshaft incrementally in the block, bringing it just a little closer to the cam. This results in the sloppy timing chain fit we want to avoid. 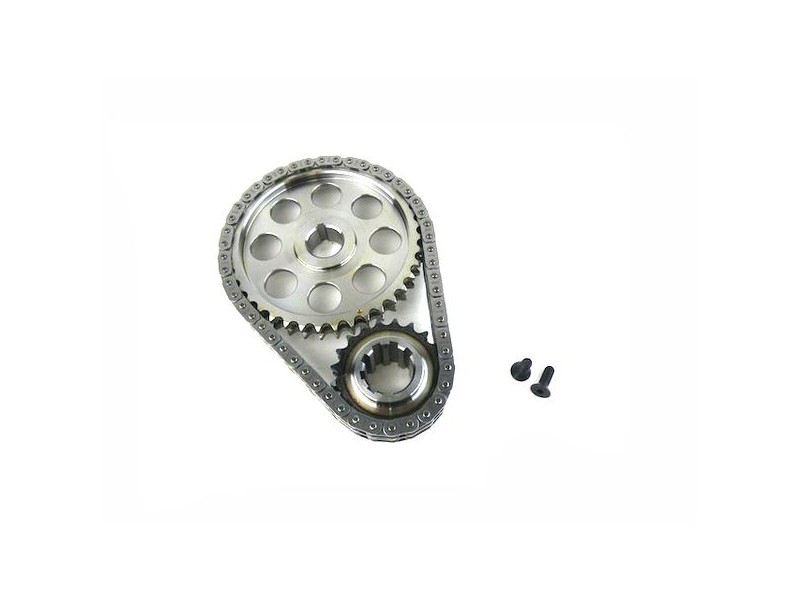 Luckily, there are a few good solutions readily available- the late tensioner arrangement has proven reliable and is very cost effective.

As an option there is a high performance lightweight steel double chain row set that is available with incrementally shorter chains to make up for a line bore ranging from .002 to .010 inches and keep it tight AND allows for plus or minus six degrees of cam timing adjustment by selecting different keyways on the crank gear.


Why is a camshaft like the heater in your house?

We often get calls from people who are about to build a new motor and have not considered any of the other many things that must be included and are trying to decide on a camshaft believing that picking the right camshaft was all they needed to be concerned about.

Camshaft selection can be as complicated as you like, but for the ultimate performance, even if that means best gas mileage, the decision requires that you consider the entire envelope that the camshaft will work within. Non-technical issues such as intended application (street, race, mileage or??), budget, expected RPM range, etc must be considered along with technical things like compression ratio, Cylinder head and valve sizes, exhaust system, carburetion, etc.

Camshafts although available from a number of manufacturers can all be grouped in some general categories: Stock, hot street, high performance and full race.  Each of these categories have their own characteristic but compression ratio is key.

In today’s world of lower octane fuel, the hope to get increased performance by simply raising compression with a ‘hotter’ camshaft has long gone.  In 1967 a stock street Cooper “S” had a spec of 9.75:1.

The Mini Mania library of technical articles contains a wealth of both basic and advanced information:

”Considerable information has been recorded about numerous aspects of the four stroke internal combustion engine. Nevertheless, only a small percentage of people really understand how it works and even fewer still know how to modify an engine to suit their needs. I will try to simplify this complex subject by discussing some basic principles that may be overlooked or misunderstood by the average person. First, it is very important to understand the relationship between piston travel directions and valve timing events. The reason this relationship is important is because it is one of the few things that is relatively easy to adjust/change.”   ….more

This whole 'scattering' deal has befuddled many. The only real prose produced on the subject, and 'advice' handed out by many so-called 'specialists' tends to be somewhat tainted with large chunks of mysticism - inferring there's some kind of black art involved. The simple fact is the principle is very basic and easy; it's getting a cam with the right profile and figures applied to it that will actually work as a scatter profile that's the hard part. I will illuminate …..More

AND even more information here!

Fitment of an uprated cam drive system is essential when building a performance orientated engine. Timing scatter induced by the standard set up can reach up to 15° once the single row chain has stretched, which it does after only a few miles. This scatter not only affects the cam timing, but also the ignition, the distributor being driven by the camshaft. Power loss suffered by this phenomenon is substantial. Replacing the standard single row (simplex)
system with a dual row (duplex) system greatly reduces the problem, use of a tooth belt system all but eliminates it. The belt system vastly reduces valve train noise and also helps damp out some of the odd harmonics generated by the 3 main bearing ‘A’ series engine. It is also extremely important to time any cam in to its required setting to obtain maximum performance, especially performance cams. The ‘dot to dot’ method can, because of manufacturing tolerances, be out by as much as 15° or more. Anything over 2° out, and power suffers more noticeably in small bore engines. In race engines you probably lose 1 hp for every degree the cam timing is out, more if over 6°. However, all manufacturer figures are really a close guide line. Dyno tuning the engine is the only way to optimize cam timing.

NOTE: The engine front plate to main bearing cap screw holes need to be countersunk, and two AEA687 countersunk screws used to clear the chain. These are the original Allen key type of screw which are used in the steel kits and Phillips type head screw are used in the budget kits.

BELT DRIVE KIT
Belt drive kits help to restore power loss caused by original timing gear wear and stretching. Helps reduce noises associated with valve train and dampens out certain harmonic noises generated by the three main bearing ‘A’ series engine. Also gives exact timing where anything over 2° out causes power loss. The kit available contains everything to replace timing gears and cover.
The less expensive alloy case version is being phased out by the millenium and replaced by the plastic case version, which has an upgraded crank gear (38mm thick) for racing. The plastic cover also has a recess section for advertising company logos
.
5 Belt drive kit with screw type variable adjustment when required.
Plastic case version. Order as part number C-AJJ3326RACE.

6 Dowel type, where interrelated holes between cam boss and cam gear are located by a dowel to give exact timing that will never move, is in fixed increments of 1°.
Plastic case type Order as part number C-AJJ3328RACE.

7 a Replacement belt for above,   Order as part number Engine04.

To aid accurate timing when using non adjustable
timing gear systems, there is a range of proper CNC machined offset cam keys available. These come in 1° increments up to 9°. One tooth round on the gear represents 13° of cam timing, so if you are more than 9° out move the cam gear one tooth in the required direction and use the keys the other way round as they are bi-directional. They are available individually.

Timing Chain Replacement for A-Series engines
Created: February 28, 2018
Building an engine is very much like most things in life- the more attention to detail you give an effort the more likely you will get the results you were looking for. Whether you are installing a new stock or performance camshaft or even simply rebuilding your motor with the stock camshaft getting the valve timing correct is one of the more important things that you can do.
Read Complete Article

Why is a camshaft like the heater in your house?
Created: February 25, 2014
Camshaft selection can be as complicated as you like, but for the ultimate performance, even if that means best gas mileage requires that you consider the entire envelope that the camshaft will work within. Non-technical issues such as intended application (street, race, milage or??), budget, expected RPM range, etc must be considered along with technical things like compression ratio, Cylinder head and valve sizes, exhaust system, carburetion, etc.
Read Complete Article

Classic Mini Cooper CAM TIMING - with video
Created: February 04, 2011
Understanding how to set your camshaft timing is a fundamental necessity when working on your Classic Mini Cooper. Learn from the experts at Mini Mania the basic and beyond.
Read Complete Article
Written By: Jemal Katat
Article Date: Mar 25, 2014