What is Turbocharger Porting?

JMTC High Performance Turbocharger porting service includes complete dis-assembly of the turbocharger followed by an extruded porting and polish service of the internal exhaust air path inside the turbine housing. The internal surfaces are smoothed to remove the heat generating high friction surfaces, and the port volume increased. 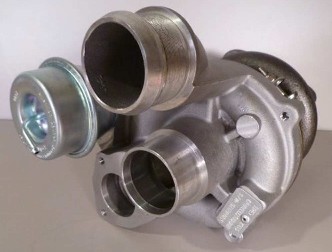 The Porting Service lowers both incoming and outgoing air temps, increases air volume, speeds up the air, and increases efficiency so your turbocharger can hold a stable target boost pressure and max flow to red-line.

The problem with the stock Turbocharger

Big turbochargers and even OEM ones have considerable difficulty holding a stable boost pressure and max flow especially when targeting extremely high boost pressures at high RPMs. This instability can cause your turbocharger to only reach the target boost pressure at the lower RPMs and instantaneously drop 3 to 6psi (known as a boost spike) lowering air volume or have unstable boost pressures throughout the RPM range. In extreme cases this can cause an uncontrollable boost spike that cases can contribute to engine damage in most cases it just cause torque and power to drop off at the top end which is when you usually need it most.
While most boost spikes don’t cause engine damage they do cause other problems like pre-ignition and high fuel consumption and they lower your engine power by preventing you from holding the desired boost pressure throughout the RPM curve. Generally boost spikes are ignored when running low boost pressures and OEM manufactures even market them as a benefit due to the torque increase at the time of the spike. However when you are trying to maximize your power they can be troublesome, a tuning nightmare, and if ignored the true turbo power potential can remain untapped. So wouldn't you rather have the turbo hold the high boost pressure all the way to red-line so you get all of the high boost pressure power and torque?
The reason for the instability is that all turbochargers use some form of sand casting inside the compressors and exhaust housing. Compressed sand leaves the surfaces very ruff so when air passes over the surface it increases turbulence which slows the air velocity and lowers volume, not to mention that it creates extra power robbing heat in both the compressor and exhaust turbine. Then you add into the mix the variability of the mating surfaces, restrictive flanges, and casting seams the air pressure is blocked and builds inside the exhaust turbine and manifold. This slowing of air not only makes it hard for the ECU to control it also means that the air wont flow out quickly and the air must be pushed out by the piston. All of this causes a reduction of power, so you are left with extra heat, slower air velocity, lower velocity, unmanageable boost control and a huge reduction in power.

There are ways to combat this issue like adding a larger more controllable external waste-gate or adding an external or inline boost controller but the cheapest method is to port and port-match the turbocharger and manifold. If the exhaust manifold and turbocharger are ported it will increase the air velocity due to less restrictions, increase the volume of air that can flow through the turbo, reduce the heat generating and turbulence generating cast surfaces, reduce the turbulence caused by poor OEM port matching, increase the size of the ports, and reduce the heat generated in the incoming and outgoing air.
All of this will make the turbocharger more controllable and more efficient resulting in a huge power gain for minimal cost. And we are not just saying this we have the data to back it up! Below is the difference between a Mazda speeds 3 with a stock turbocharger which was removed ported (only) and reinstalled. To get the data below there are no other changes to the system and no re-tuning the ECU to change the target boost pressure.

Looking at figure 1 you can see the pre-porting data of a Mazda Speed 3 tuned for a target pressure of 20psi. Notice how the boost spikes to 20psi than drops back down to 16psi. this is due to imperfections causing turbulence, restrictions, and extra heat in the system the control unit has trouble getting the turbocharger to reach and hold high boost pressures.


Figure 2 shows a MS3 JMTC turbocharger with manifold port and port-matching service. You can see where the turbocharger not only gets to the target pressure faster but the stability is much greater. Resulting in the system reaching boost pressure at 3000rpms and holding it until the throttle is let off at 5500rpms. Since 1psi = about 8 to 12hp the power lost could have been as much as 30hp! This is a huge loss of power and based on a cost of a $300.00 porting service, the cost of the benefit would be around $10.00 for 1hp when compared to tuning that cost $900.00 and/or tuning plus a boost controller of $400.00 that would be a cost of $30.00/$43.00 per 1hp.
Article Date: Dec 18, 2014