Related Parts
I recently suffered an intermittent rattling noise coming from the clutch assembly in the front, drivers side of the car and was fairly certain that it was the release bearing as it would disappear as soon as you depressed the clutch.

However, it was unusual in so much as once a release bearing becomes noisy it usually stays that way. So the fact that on many days it was completely silent seemed odd. I also occasionally noticed it increasing with engine temperature. It wasn't a deep concern as it was happening with such infrequency and of course it would never misbehave when it was at the dealership for service. Well finally it did and was diagnosed as fitting the exact criteria of a Technical Service Bulletin for 05 vehicles that had faulty dual-mass flywheels.

To me, the flywheel has always been a simple device - a large, flat metal plate about 3/4 of an inch thick that is bolted onto the end of the engine crankshaft. It has a toothed gear around its circumference that the starter motor engages in. Designed to give the engine momentum and to assist with starting, there is a machined surface at the point of contact for the clutch, which is held against the flywheel by way of the clutch assembly. A spring-loaded pressure plate connects the car's gearbox to the flywheel by compressing the clutch plate between the flywheel and the pressure plate, conveying the engine's rotational force to the gearbox and subsequently to the car's drive train and wheels.

The clutch plate itself (the part that wears) is made of a similar material to brake pads and, when your in gear and driving, is pressed hard against the flywheel by the pressure plate. As you depress the clutch, a metal ring assembly that is around the the drive-shaft is pressed up against the clutch assembly and it compresses the springs releasing the pressure on the clutch plate and prevents transfer of power from the engine to the gearbox. You can then change gear, or stop the vehicle, without impacting engine speed. This assembly is called the release, throw-out or thrust bearing. Here is a great diagrammatic example of how this works. 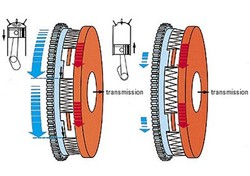 Modern engines are much more capable than ever before of being driven at low engine speeds. In fact the addition of a fifth or a sixth gear to reduce fuel consumption certainly moves towards having more torque capability at lower rpm. Also thinner gearbox oils and advanced gearbox design are making precise shifting easier. In short: The sources of natural damping is decreasing. More efficient gearboxes using lighter weight oils have greatly reduced the natural damping effect for both vibration and noise that older more stodgy drive-trains used to have. Our engines are still being driven with a four-cycle reciprocating piston stroke: Induction, Compression, Ignition and Exhaust (suck, squeeze, bang, blow) the crank shaft converting these vertical down thrusts from the ignition cycle to a rotational force at the flywheel.

The result, shown in this diagram, is a lot of vibration that is carried from the engine to the drive-train, particularly as the clutch engages and the vehicle starts to pull away.


The job of the clutch is now taking on another role. In addition to connecting and disconnecting the power from the drive-train, it must also prevent the transmission of the engine's vibrations. One of the first manufacturers of a solution to this was the German company LuK. 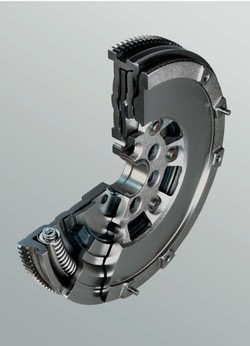 a cut-away view of the Dual Mass flywheel used in the MINI.


The mass of the conventional flywheel was simply split in two. One part continues to be attached directly to the car's crankshaft in the same way as a standard flywheel would be, while the other part now increases the mass moment of inertia of the transmission. The two decoupled masses are linked by a spring/damping system. One clutch disc, between the secondary mass and the transmission, handles the engaging and disengaging functions.

A favorable side effect is that the transmission is easier to shift because of the low mass to be synchronized, and there is less synchronization wear. This greatly improves drivability by absorbing the vibrations, reduces noise and enables comfortable, low-revs driving and contributes to better fuel economy. One side effect is that the dual-mass does tend to have a resonant frequency that could contribute to noise so an additional damping device effectively prevents resonance overload. In normal operation, however, this additional damping device has no function and the torsional vibrations of the engine are filtered out by spring dampers. These damping springs are long, as can be seen in this illustration.


For optimal vibration isolation and soft resonance when starting and stopping the engine, the ratio between friction and spring rate must be optimal. The length of the springs is a key factor: The softer a spring, the more efficiently vibrations are isolated. The extra-long springs of the latest generation of dual mass flyw

heels significantly reduce the spring rate compared to a first generation dual mass flywheel. In routine driving operations, excessive resonance increases are kept almost completely away from the gearbox. The dual mass and the springs mounted sideways between the primary and secondary flywheels provides extra vibration dampening and eliminates excessive transmission gear rattle for smoother clutch engagement and operation. Dual mass flywheels were first used in the mid 80s on Chevrolet, Ford and GMC diesel-powered light trucks, and are found today on a number of trucks and even some European sports and luxury cars.

Well, its goes to show that the auto industry will never stand still when it comes to innovation and technological advances. Even things as simple a flywheels have advanced and now provide benefits beyond their original design. Since I had my dual-mass flywheel replaced the noise and rumbles have completely gone away.

I would like to thank the people at LuK GmbH & Co. oHG for providing me with these great illustrations and the permission to use them.

Have a Question or Comment of your own? Click here!
Question:
What is the proper way to know if your dual mass flywheel is no good.
Answer:
Dual Mass flywheels are difficult to resurface due to the threat of particles contaminating the internals - almost no shops will surface them. So if you have a failed clutch it's best to replace it.