Car and Driver Magazine Specialty File: Mini TEC VTEC Mini
Just when you thought it was safe to buy a Mini.
BY TED WEST, PHOTOGRAPHY BY JIM CAIOZZO – February 2005 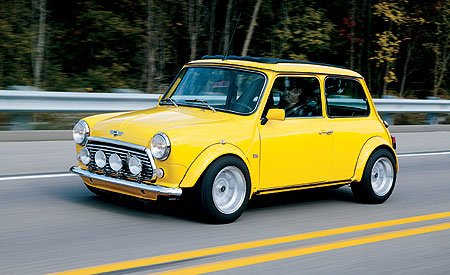 Once upon a time when the mountains were young, import-car buyers were avant-garde. These half-mad radicals thought nothing of trading in a perfectly good De Soto Firesweep for—whoa!—an English car! They craved something quirky and agile like a Morris Minor or Hillman Minx that worked. Worked! Started every morning. Lasted decades. Sold for cheap.

Of course, you nod, they wanted a BMC Mini, but engineered by Honda.

And 40-plus years later, Mini Tec of Royston, Georgia, offers just that—a rorty 220-hp Honda VTEC four-cylinder engine mashed into an original Mini. The real BMC Mini. Two of these wee paperweights parked together look like a pair of dice. Mini Tec will sell you a couple—or just one—then run for the tall brush. They aren't afraid the car won't work; they're afraid it will.

The original Mini's charisma is so legendary that BMW gambled mega-millions—successfully—on its resurrection in 2001. But compared with the BMC Mini, BMW's version is a Peterbilt. The impossibly "cute" 1959 Mini designed by Sir Alec Issigonis still provokes helpless smiling. Among enthusiasts, ownership remains contagious; the minute one Issigonis Mini appears, the entire neighborhood must be dusted with flea-and-tick powder.

You're right, that's pure hyperbole. But with Minis, hyperbole is just good reporting. Add a dose of violent VTEC performance, and whoppers are automatic. The Mini Tec VTEC is one of the fastest, and, um, furious-est, drives south of a Z06. Just look at the numbers from the one we tested-1792 pounds and a claimed 220 horsepower. The Honda engine was originally for the Acura Integra Type R and was rated for 195 horsepower. But Mini Tec says better-breathing intake and exhaust systems add 25 ponies, and despite copious amounts of wheelspin, the VTEC Mini still scooted to 60 mph in 5.0 seconds. 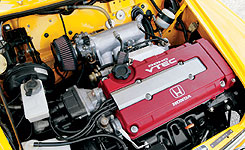 But sliding a 21st-century VTEC into this Bronze Age Mini takes more than shoehorns and grease. Norman Holley, a Clemson graduate engineer, devised his Mini Tec B-series subframe to facilitate the VTEC Mini's Frankenstein-ism. The hood and the front fenders must be stretched forward four inches. (It's not noticeable until you're told it's there; then it looks cryptically cool.)

The conversion doesn't change the stock Mini's front-suspension dimensions, welcoming any new or aftermarket Mini wheel. The Honda radiator has room to sit low, with no ugly hood modifications. A standard Mini brake servo and stock upper control arms and uprights combine with the standard Honda distributor and ECU. Camber, caster, and ride height are fully adjustable. Except for its invisible nose extension, the Mini Tec Mini is indistinguishable from a 35-hp '59 Mini.

From the pilot's seat it feels the same, too. If you've never sat in an original Mini, nothing can communicate its utter eensie-ness. But we'll try.

One afternoon years ago, our friend John Clark retired from racing in a Mini, for cause. He is an XXL sorta guy, and his racing Mini Cooper S fit him like spandex. He was on the track annoying physics that day, tossing the 80.0-inch wheelbase—80 inches!—side to side through the esses at great speed when, suddenly, the car took matters into its own hands.

Rolling, leaping, and rolling, it closed in around him like aluminum foil around take-out fried chicken. Unhurt, but shaken and stirred, he was removed surgically and found other pursuits. The point? This little car feels nearly as wide as it is long, decidedly not the formula for high-speed stability—and with a VTEC under its chin, high speed is never far away.
A word to the wise. 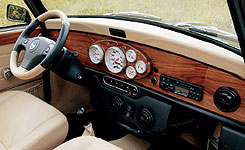 Accordingly, full-power applications put our test car in a sort of swoon, veering sharply this way or that, depending on the phases of the moon. Acceleration is stupendous, of course. We had no difficulty keeping up with an aggressively driven AMG SL65 in heavy interstate traffic. But then it started to rain. In the wet, throttle applications sent our micro 175/60R-13 Yokohamas sluicing still farther this way or that, ignoring the moon entirely. Exciting.

And the distinctive Mini driving position added spice. The steering wheel was tilted toward horizontal, city-bus style, as befitted the original Mini. And our test car had a bit less caster than the ideal, making for so-so on-center response. Caster settings can be adjusted to suit, and in the dry, uncertain steering feel was merely a distraction. But at speed in the rain, giving the throttle hard bursts to stay with the AMG, we were the world's busiest bus driver. 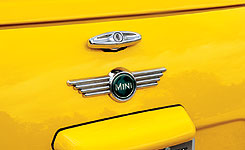 Not surprisingly, given the age of this silk purse, a little sow's ear is showing. The steering-wheel position, throttle steer, short wheelbase, and tiny wheels all counseled caution—while delivering stellar skidpad numbers, incidentally.

That said, this VTEC Mini is surely the definitive pocket rocket. And speaking candidly, Mini Tec allowed that although the customer who ordered our test car demanded the full turn-key $30,000 Type R treatment, milder Honda VTEC's of, say, 170 horsepower (starting at about $19,000 for a complete car) make a far more drivable package.

Or if you already have a Mini and a Honda powertrain, you could simply buy the VTEC B Series Engine Conversion Kit for Classic Mini and do the conversion yourself. Sounds right to us.

f you're a guy (or gal) who thinks Vin Diesel is a girly man, this R-car is the Mini for you.

Reprinted from Car and Driver Magazine.

Video: VTEC Mini at A Classic Car Meet Will they hate it?
Created: April 05, 2021
What happens when you take a VTEC Mini to a Classic Mini Car Meet? Will they hate it? Check out Might Car Mods awesome video. The answers may surprise you.
Read Complete Article

VTEC Mini Episode 8 - ARCHES
Created: December 11, 2019
VTEC Mini Episode 8 - ARCHES Creating the look of the car is a fun part of every build. The wide wheels and arches on this mini are defining and eye-catching features, so it's important that they sit right. After they're installed we bring you into a part of our creative process as we play with vinyl and paint.
Read Complete Article

VTEC Mini Final Episode - The REVEAL
Created: December 10, 2019
VTEC Mini Final Episode - The REVEAL We have rear flares! They are finicky arches, considering that we need to trim, fit, vinyl wrap, and paint them all in one night. But getting the rear arches installed checks off the last item on the to-do list. Time to show the car.
Read Complete Article

Have a Question or Comment of your own? Click here!
1 Comment
From:
Eliza Winters
Date:
08/16/2011 @ 11:14 AM
Comment:
What a great site! I have a BMW and I absolutely hate taking it in for maintenance and repairs! BMW repairs ( bmw repair ) are so expensive and I never feel like I am getting the quality of repair that I am paying for. but I absolutely love these cars and cannot seem to part with them.
Please Wait